When you want to make a mobile hit, you’ll need some heroics of your own.

At our GamesBeat conference in San Francisco last month, six independent developers got to show off their mobile games in TrialPay’s Game Zone. A panel of judges including industry experts (and me) then voted on a winner to receive $20,000 from TrialPlay. That winner was Shop Heroes, a colorful sim game that has players making and selling items to fantasy characters.

We got to talk to Di Huang, the chief executive officer of Shop Heroes developer Cloudcade. He told us why he thinks his company won the contest. He also explains how being featured by Apple can be a double-edged sword.

GamesBeat: Why do you think you won the GamesBeat contest?

Di Huang: We stand out among new developers. We build all of our games with a triple-A title approach. We focus on a lot on gameplay as well as graphical appeal. Indies have less resources to be able to manage all of those aspects and be able to balance well.

GamesBeat: One thing that struck me when I played the game was the art. Mobile games often have a tendency to look a little cheaper sometimes, but you guys had these really beautifully drawn character portraits.

Huang: Absolutely. We went out of our way to hire some of the best people to put our games together. Just to give an example, the three people on our team are ex-Disney, ex-Riot, and two of the artists we brought over were among the top 10 on DeviantArt. One of them had something like five million followers. We went out of our way to cherry-pick the best of the best for our team. I must have interviewed more than 50 artists before deciding on the final three we wanted to go with. 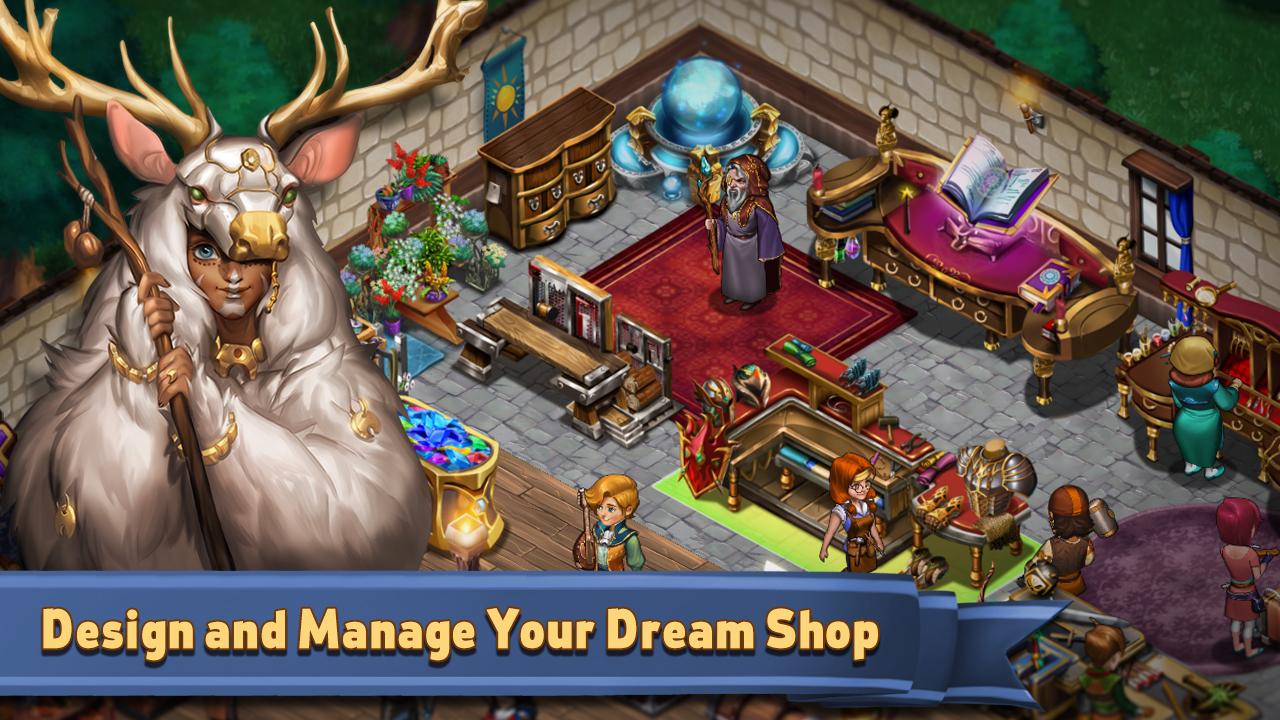 Above: Nice and colorful.

Huang: Yes. The game launched just over a month ago. It launched globally with Apple and Google during the week of the September 16. We were supposed to launch about two months prior to that, but Apple really wanted us to wait so they could feature us with the iOS release, so we pretty much went with their time schedule.

GamesBeat: How has the performance been for you guys so far?

Huang: It’s been good. We have really good metrics all around. We’d been soft launched for about two months prior to our global launch. Really good retention, really good monetization. Retention is probably double the mobile industry average for our type of game. Monetization and conversion have been fantastic. But that was expected. We built the game around monetization in the core loop.

To go back to your first question, unlike most indie developers, who are a couple of people trying to build a game they think is fun to play themselves, we take the approach of bringing a lot of diligence and analyzing the market to see what genres or what types of games are undersaturated among historical performers, or that have a historical record of success, maybe on different platforms or in different geos. We test-ship a very early iteration to engage with the market to see if it has market validation to meet the internal benchmarks for these metrics we were mentioning, KPIs (key performance indicator) like monetization and attachment. Then we go into development.

For this first game, we really built the game around the monetization core loop and then made it fun after that. When players play the game and they’re monetizing, they don’t really feel like they’re monetizing in the game. They feel like it’s a core strategy, that it belongs as an essential element of the game itself. Just to give you a rough estimate of the numbers, on average we have an ARPDAU (average revenue per daily active user) across all platforms and all geos of more than 50 cents. That’s very high for a mobile game.For tier one geos it’s more than a dollar.

It was almost a double-edged sword, being featured with iOS 9. Because inherently, with every new iOS version, there are always some technical bugs associated with it. We did get an influx of users with that, but at the same time, there were some issues with the game center integration. We lost and churned a bunch of our users, almost 58 percent if I remember correctly, because users were losing their account progress to the iOS 9 issues. That’s unfortunate for us. 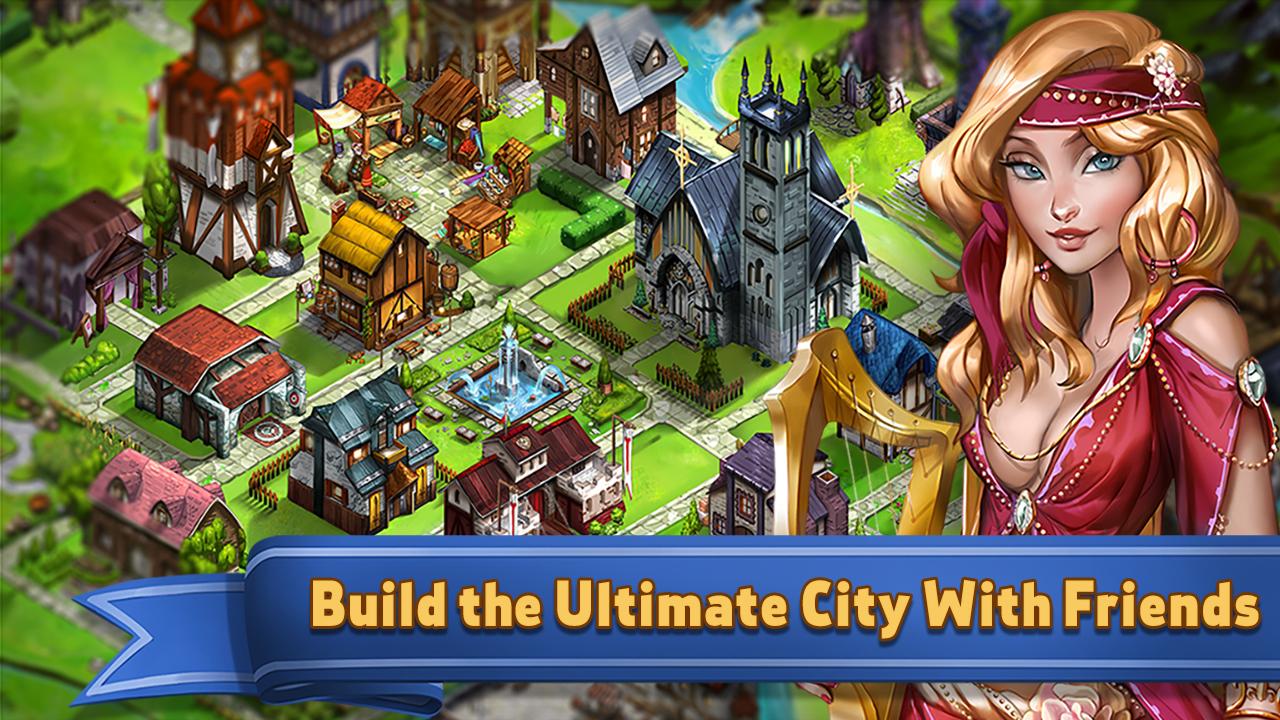 Above: Building up your city will help you make better items.

GamesBeat: That’s something I’ve been hearing from a lot of developers. Sometimes getting featured on the stores, it can be a good thing, but if the timing’s not right it can be a problem.

GamesBeat: What kind of gamers do you guys target? The gameplay does have that casual, free-to-play feel, but the setting is something more familiar to hardcore gamers who play RPGs, with the idea of running an item shop and stuff like that.

Huang: We’ve built all of our games for global mass-market appeal. With that, it’s like you said. We try to make the gameplay very casual, very easy to play. It’s super linear in the early levels. Someone who’s never played a core game can pick the game and relate to it. But as you progress in the game beyond level five, more and more depth appears.

We like to compare it to an onion. There are tremendous layers of strategic depth in the game. With each level of progression, more and more content gets unlocked. It’s not super overwhelming for players who have to learn along the way, if this is their first time with a core game, and for hardcore players, as they’re grinding through these levels and passing levels really quickly, they get access to new levels of depth they can engage around. Above: The TrialPlay Game Zone at GamesBeat.

GamesBeat: You guys have a lot of social aspects in your game, building up a town with a lot of people. What’s the driving force behind that? Is about keeping players engaged, building that sense of community?

Huang: It’s a couple of reasons. The social element is what keeps the game competitive. It also keeps users continuing to monetize across the game. It also just makes the game a lot more dynamic. We have some social elements in the game already, things like co-op, playing with other players. You can get your cities together to unlock new content. That’s the very early stages. We have lot of plans. We have two, two and a half years of features in the backlog that we’re going to be building. We’re going to be building a lot more social features into the game to engage both more collaboration between players and more competitive elements.

As you know, whether it’s collaboration with other players or competition and friction created between players or groups of players, it’s great for keeping people more engaged, more active, more active in daily quests. As well as encouraging them to monetize to stay competitive.

The goal we have with both Shop Heroes and many other games we’re working on right now — it’s to appeal to a global demographic without too much localization for each geo. Our target in the beginning is focusing on quality above all else. We’ve built all of our games to be as original as possible. We don’t want to be a king or a Storm8 where we become a content warehouse and kind of churn the same content over and over under a different skin.

For us, our core strategy is creating a strong, identifiable, original IP that we can then take to the market if we have strong validation and strong feedback from the market. We can reuse that game IP we’ve created across a slew of other games, but in completely different genres. We want to reverse the strategy of King with Candy Crush and Soda Crush and whatever. We’re making a strategy game that revolves around cards, trading cards. It’s completely different from the shop management game, but players will be able to see a lot of the same characters, a lot of their favorite images and settings in the new game as well. It becomes a strategy where we’re not officially displacing players’ time from one game to another like King does. They retain a user as long as possible in Candy Crush, and then have them leave altogether to play Soda Crush.

For us it’s a way to displace player time between two of our game. We know that players are going to play multiple games regardless, so why not have them play more than one game of ours? We can keep their attention and they still enjoy it. At the same time, by doing this, we’re able to cater to a wider demographic of players. Regardless of the game that we build, there’s going to be some players who won’t adopt the genre. They just don’t find tycoon games or simulation or RPG fun. But maybe they love trading card games. When they play this trading card game they might find the IP to be charming and that might encourage them to try the simulation game that they wouldn’t have otherwise played.

GamesBeat: Diversification is an important part of developing for mobile these days.

Huang: Exactly. It’s not like the old console days, where players paid $40 or $50 for a game and started out with an emotional attachment. With mobile, installing a free app takes two seconds. If you don’t keep that user’s attention they’re gone forever.