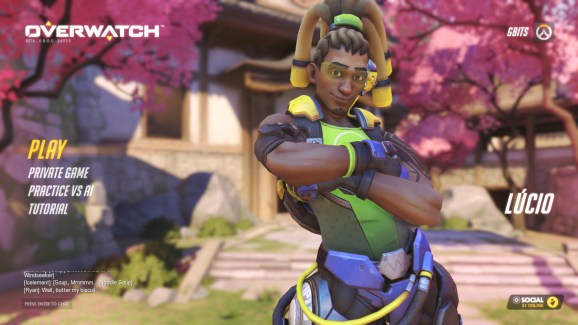 You need money to look this stylish.

Everyone was expecting Blizzard’s next big release to go the free-to-play route. Here’s why everyone was wrong.

You’ll need to drop $40 to buy the “base” version of Overwatch for PlayStation 4, Xbox One, or PC, the publisher announced at its BlizzCon fan event earlier today. That’s a lot more than the zero dollars many people were expecting to have to pay for the shooter — especially after Blizzard has found so much success with the Hearthstone: Heroes of Warcraft card battler and Heroes of the Storm multiplayer online arena battler. Both of those games have always had no price to start playing. Of course, while Overwatch isn’t free, that doesn’t mean it is devoid of microtransactions. Blizzard is adopting the less popular “pay-to-pay” model similar to what Valve has done with its Counter-Strike: Global Offensive military shooter. While this is a shock for fans, Blizzard has its reasons, which include consoles, money, and slowing down the influx of players.

SuperData chief executive and top analyst Joost van Dreunen told GamesBeat that Blizzard is blazing something of a new path by releasing a game like Overwatch on consoles.

“Free-to-play titles on console are still in an early stage,” van Dreunen told GamesBeat. “There are, in fact, few comparable titles available to inform the business case for Activision Blizzard. That, in combination with the production costs for a well-produced title like Overwatch, leads to the decision to charge $40 for the game from the go, and then offer additional content via micro-transactions.”

So instead of trying to push Overwatch into a model that no one has proven on console yet, Activision Blizzard is doing something that it has seen work twice before in two high-profile releases: Call of Duty and Destiny. Both of those shooters started offering microtransactions for items and cosmetics, and both padded their revenues through this business model. This is something that has also succeeded on PC where you can spend $15 on Valve’s Counter-Strike: Global Offensive only to also have the opportunity to spend a nearly limitless amount on cosmetic content.

Blizzard wants to amp up that model with Overwatch by launching with microtransactions.

But while you’ll need $40 to start playing Blizzard’s new shooter at release, it’s possible that Overwatch (and even Counter-Strike) could one day turn into a free-to-play game, according to Newzoo chief executive and analyst Peter Warman.

“Games going free-to-play from the start can often not handle the volume of players [from a technical standpoint], and adjusting your gameplay and business model based on gamer feedback is undoable when you have millions of players coming in,” he told GamesBeat. “What Blizzard is doing is creating a paid beta period.”

Warman is suggesting that Blizzard is taking a cue from PC developers in China, who almost always charge for lengthy beta periods before releasing their “full” games for free on the official launch day. The Newzoo CEO compares this to mobile developers testing their games in markets like Canada and Australia before doing a real global launch. He thinks that, going forward, this is something that more and more traditional gaming companies will adopt.

So by charging for Overwatch, Blizzard can do two things. It can make money from its most dedicated and excited fans. This will help it recoup the cost of development. The studio can also simultaneously test, adjust, and prepare the game for the potential shift to free-to-play and an influx of more fickle customers.

Blizzard has not said that Overwatch will one day go free-to-play. We’ve asked the company if that’s a possibility, and we’ll update this story when we get a response. But that is always an option for something this new shooter. And why should Blizzard give up an early windfall of cash, especially on consoles, when it can instead perfect its game with a more flexible and reactionary business model?

Warman points out that the Chinese games that follow this model often do so for the better part of a year, but Valve released Global Offensive in 2012. And it is still $15 and more popular than ever. Overwatch could go through a similar pattern of growth. And when either of these games ever start to lose a critical mass of players, their publishers can flip the switch to free-to-play with a game that has had months or years of testing, updates, and improvements.

It’s a sound plan to make money, and seems like the kind of thing a megasuccessful business like Blizzard would do.

Warman agrees that it makes sense, “All in all, it’s a smart move.”