ANAHEIM, Calif. — World of Warcraft may soon have a Diablo 3-inspired transmogrification system that doesn’t require players to take up space in their existing storage for items used to change the appearance of their gear, a Blizzard Entertainment executive told GamesBeat today at BlizzCon 2015.

I sat down with senior vice president and executive producer J. Allen Brack to talk about the future of the company’s massively multiplayer online role-playing game. The new expansion, World of Warcraft: Legion, is expected to debut “on or before” September 21 of next year. Blizzard announced the official release date as summer 2016 at the BlizzCon convention this morning.

One of the topics we discussed was the ongoing struggle WoW players have with limited bag space. Blizzard introduced a number of improvements in the past year to try to assist players, especially those that have been collecting items in the game for the full decade it’s been on the market.

Many of those items are for appearance reasons only: WoW offers players the opportunity to change the look of most armor and weapons to match almost anything they have collected. Brack said the new transmog system will eliminate that problem. 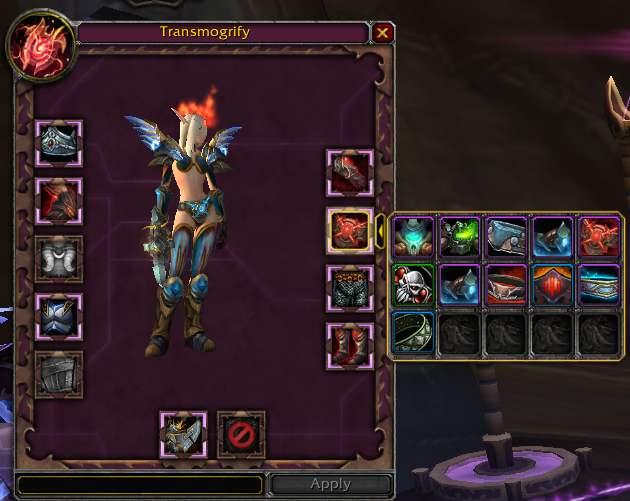 Above: The existing World of Warcraft transmogrification screen, which shows you items in your existing bags and storage to choose from when changing the appearance of an armor piece.

“I cannot relate to that at all,” he said, laughing. “Ten-thousand gold for two more slots. A huge amount of gold to keep two more things.”

The new system will include tabards, which overlay a player’s armor and often display graphics relating to guilds, factions in the WoW, or achievements. Players can earn an achievement for collecting them — but they clog up bags and bank space.

“The teams operate in silos,” Brack said. “We learn more from other teams by playing those games. We put in a transmog system a few years ago. The Diablo team looked at that and said, we can do that for our game, and even make it more robust and more fully-featured.”

The designer who worked on the system for Diablo now works on the new version for WoW, he said.

“We’ve looked at things we’ve done in the past, things Diablo has done,” he said. Want hints on what that’s like? Check out the D3 system, he said.

In the current iteration of Diablo 3: Reaper of Souls, transmog works almost like an achievement. When you obtain an item for the first time, you “unlock” the ability to make other armor look like that item. You don’t actually have to keep the item in your bag.

“It’s going to be done in a WoW style, and it’s going to work in a way that feels much more like WoW, but it should eliminate a lot of the challenges that people have with gear and bags, and make it much more of an item collection system,” Brack said.

One of the frequently asked questions related to space in Warcraft is the game’s original backpack, the fixed 16-slot bag in players’ inventories that you can’t upgrade or enlarge. With other bags in-game approaching 32 slots, some players are finding the original backpack a little cramped.

“There are some technical challenges with changing the 16 slot backpack. It was never meant to be upgraded. And so there are all these assumptions built in,” he said. “We’ve had some people doing some investigation. It’s something we absolutely want to do. The game assumes there are only 16 slots in the backpack in a number of places. So you’ve got to go back and find all those assumptions.”

They had employees test what would happen if you just randomly made the backpack hold 18 items, he said. The results weren’t pretty.

“Right now, they would fall into a Void of Nothingness and be mailed to you,” he said, adopting the cheery tone of the Postmaster that returns lost items. “We found this in the Twisting Nether. Here you go!”

That would have some fairly catastrophic effects, Brack said, laughing.