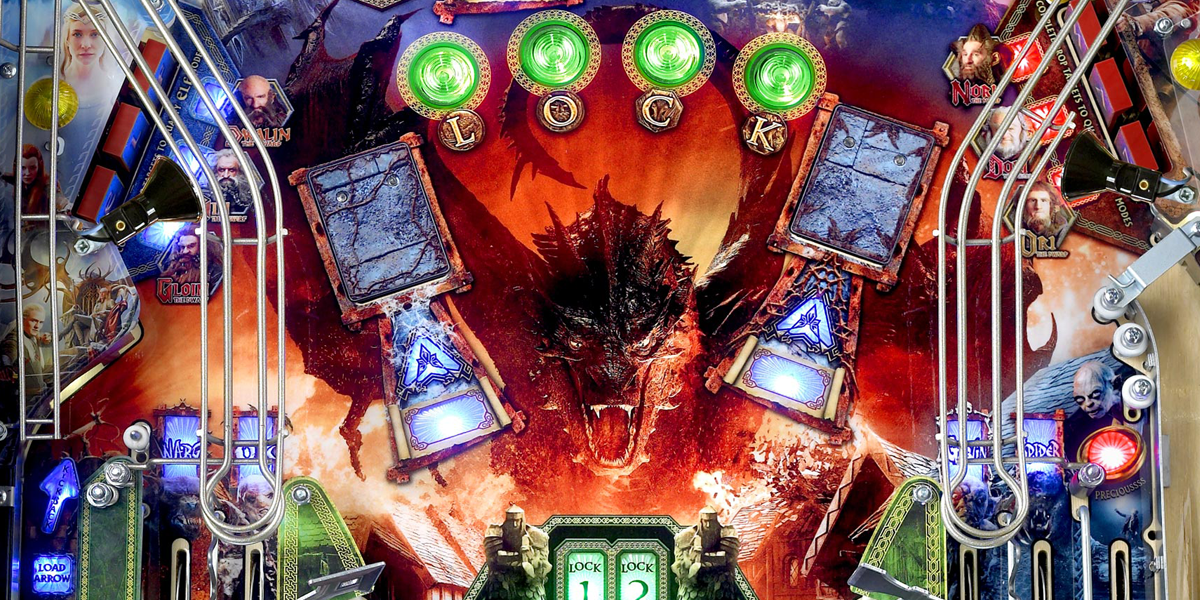 Above: Smaug makes an appearance on the play field.

GamesBeat: I know this is different for every project, but for The Hobbit, did you start designing the game before or after you knew what the theme was going to be?

GamesBeat: I remember hearing the The Hobbit project was going to be designed in conjunction with the movies’ production. Although this is a product based off of a popular book that’s been in print for decades, Hollywood is Hollywood, and you can never be certain what they are going to produce in the end. Stuff gets added last-minute, entire scenes get cut, etc.

Was it a challenge putting the game together, with a licensed theme that was still organically coming together?

Johnson: Yes. At the beginning we were faced with the problem of designing the game only with the assets of the first two movies, because the licensor was not releasing anything from the final movie. Obviously, as the schedule slipped, that was less of an issue, but it provided a lot of interesting constraints.

There is very little movie [or] scene-specific wording on the play field, it is all generic ‘shoot-me’ arrows and squares. There are multiple reasons for this — having a ton of content that can’t be enumerated on a play field [anyway] — but quite simply there was no way of committing to anything in the third movie until it was seen.

GamesBeat: The Hobbit project saw a delay and missed its projected release date. People expected it to release before the final movie in the trilogy, The Hobbit: The Battle of the Five Armies.

Was there something on the design and development side that held the game up?

Johnson: The game had a poor showing at its debut, Pinball Expo 2014.

Many people expressed disappointment in the art package, and there were some geometry issues that the game would’ve benefited from that weren’t done at first, because we were trying to make production start. Redoing the game’s art opened the door to fixing things as well — opening the bumper area was the biggest one — and the resultant game is vastly improved both in terms of aesthetic value and ball flow.

de Win: Yes, we [also] did not receive any move assets before the movies were released to DVD. So I could only start implementing the latest assets after the DVD releases.