Facebook is deploying a new way to help you share your photos with friends through its Messenger app. Called Photo Magic, the feature will scan through your most recent photos, use facial recognition to find out who’s in them, and prompt you to send the image right to the associated individuals.

This capability is said to be already available to users in Australia today on Android, with an update coming to iOS later on. For those in the rest of the world, Facebook will launch the feature in the coming months.

With more than 700 million monthly active users, Facebook Messenger is a product that is rapidly becoming central to the way we live our lives. It’s said that 9.5 billion photos were sent through the app in just the last month — so why not utilize facial recognition to help ensure that the experience is better than it was before? At first, it was considered to be on the scale of what AOL’s Instant Messenger or perhaps even what Google Hangouts is, but over the past couple of years, Facebook has invested resources to make it a communication platform among friends, customers, and businesses. 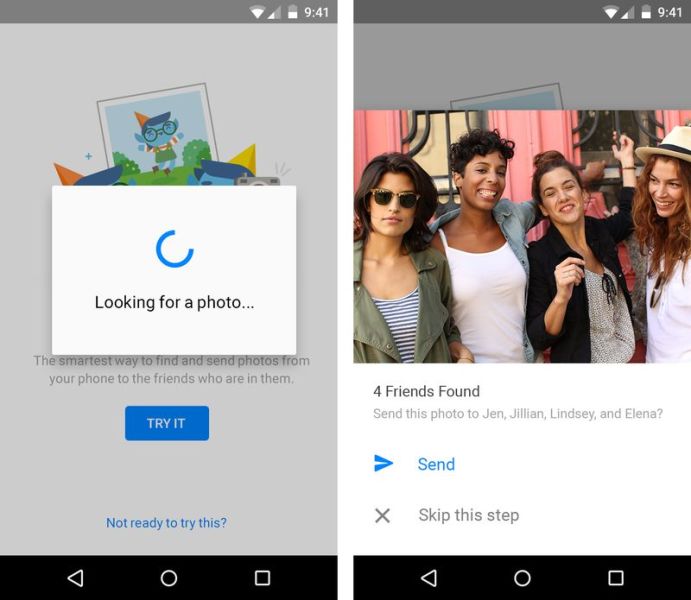 Above: Using Photo Magic on Facebook Messenger for Android

The original idea to unbundle Messenger from the core Facebook app was met with criticism, but over time it appears to be gaining acceptance, likely because of the new features that are being tested, such as the company’s mobile virtual assistant service M.

This isn’t the first time facial recognition has made it to the social networking company’s bespoke apps. In June, it debuted Moments, a service that facilitates sharing of photos with friends. The best way to find out who to share your photos with is through facial recognition. And let’s not forget that the social network itself uses this technology to help you determine who to tag when you’re uploading photos, likely powered through Facebook’s acquisition of Face.com in 2012 for up to $100 million.

I know that I take a bunch of photos on my mobile device, and when I want to share them with others, it can be difficult to remember who was in there, especially if there’s a group photo. Plus the time it takes to sort through them all can be tedious. But Photo Magic might allow me to share private moments with individuals or groups in a streamlined fashion.

Of course the motivation behind this is to continue to show the benefit of Facebook Messenger. If this app can tell you who’s in a photo and you can share it with your friends, you might feel more inclined to make it your default conversational tool. As a result, it’ll be at the forefront when you think about wanting to talk to businesses or anything else.

To some, the idea of using facial recognition to find out who they are can be kind of creepy and an invasion of their privacy. However, Facebook’s settings will allow you to opt out of being detected.