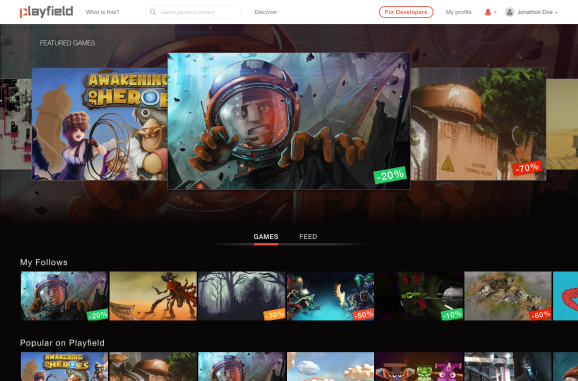 The front page of Playfield.

We live in a world with an overwhelming amount of content. In 2015 alone, enough games have come out to keep you busy for the rest of your life. This has prompted a developer to build a new site where studios and the gamers that would love them can find each other.

Playfield.io is now live, and it’s promising to put a dent in PC gaming’s discoverability problem. It works by providing developers with a homepage for their games, where they can upload photos, videos, and all of their social feeds in one place. Gamers can use the site to like, comment on, and purchase games. Of course, Playfield will then use that data and your interactions to suggest new games for you. Developer Shark Punch, which produced the bank-robbery game The Masterplan, is responsible for Playfield, and chief executive officer Jiri Kupiainen says that he wants to build something akin to Reddit for indie games.

And while Playfield have to differentiate itself in a marketplace that already has GOG, Humble Bundle, and Steam, it thinks it can do that with a focus on helping people find games they’ll love but probably wouldn’t have found anywhere else. So if you open up Steam and hate the crowded store section, Playfield is potentially the answer.

The CEO said that he and the other developers at Shark Punch found themselves driven to build something like Playfield after releasing an indie game.

“I’ve been making games for the last 15 years,” said Kupiainen. “[Two years ago], we started making The Masterplan — a tactical top-down game about bank robberies. When we released it, we noticed how painful it is to find the people who get it — to connect with the gamers who would enjoy the concept.”

And Shark Punch isn’t alone. Hell, the discoverability problem even has a name: indiepocalypse. The idea is that markets like the Steam distribution platform are constantly flooded with new releases, and that means fewer games have the chance to stick out.

“We’ve spoken with hundreds of indie developers, and they’ve all experienced the same issues,” said Kupiainen. “We tried Steam Greenlight and Early Access — all of this so we could have a better chance of reaching the people who love the idea. But at some point, we felt the tools that were available weren’t really getting the job done. We’re gamers. And we also found ourselves complaining about how many cool games you never hear about until they’re five years old.”

That’s when Shark Punch decided to act, and the company was motivated by its previous success building platforms.

“About five years ago, we founded a company called Rocket Pack,” said Kupiainen. “It was a way to make games in the cloud. Disney acquired that four years ago, and we spent a few years finding out how corporate America works, and I left Disney two years ago.”

But having built and sold Rocket Pack, Kupiainen felt confident about taking on a new challenge trying to solve problems for other developers.

How to fix discovery

Shark Punch got to work on Playfield last year, and it launched an alpha version earlier in 2014. Now, the site is in a beta test, and it features most of the basic functionality that it needs to start generating revenue.

This means developers can start showing off their games, and consumers can start using the site to discover new stuff. And studios like Surgeon Simulator developer Bossa Studios and Legend of Grimrock creator Almost Human have already embraced the site. To attract even more developers, Playfield is offering a special revenue split until February where developers get 90 percent and Playfield gets a 10 percent cut.

But money is just one reason developers may choose to work with Playfield — the other is that it’s not going to favor games that are already making money.

“We think of the game pages on Playfield as subreddits, and we wait for signals that help us know when people are liking, talking about, or sharing a certain game. And when we see that, if we notice the game isn’t making any money, we can find ways to amplify that,” said Kupiainen. “What other store fronts do is find games that are already make money and help them make more money, but we want to help the games that are getting interest but are not [converting] for some reason.”

Paying attention to those kinds of details could make Playfield attractive to indie developers, but it’s also only the start. Shark Punch is actively working on other tools to help promote games that it will roll out with future updates.

“The whole ‘indiepocalypse’ thing is really all about the fact that the tools for making games are now free,” said Kupiainen. “Game development is becoming the same thing as professional photography. There’s a larger group of people who are not full-time pros, but they are also not amateurs.”

He’s likely right. In recent years, game-development engines like Unity have made it possible for anyone to start building a game with almost zero investment of capital. Nothing will undo that, so indie developers are learning that they have to adapt and make smarter decisions to have a chance to succeed. But this is frustrating for many developers because the business is still set up to favor the biggest hits, and everything else is barely scraping by.

“Solving that is really about discovery,” said Kupiainen. “Really understanding the interests of individual consumers and being proactive about getting the kinda hidden gems they’ll love.”

The CEO acknowledges that this doesn’t really make commercial sense in the short term, which is why you only get weak attempts like curators from Steam. But he thinks it’ll make all the difference from a longer-term perspective.

“As a gamer and as a developer, I think there’s tremendous potential in surfacing the kinda content that could serve a mid-sized audience,” he said. “Games that’ll never get to the front of the App Store, but that will still make a lot of sense to 100,000 people.”