Croft is best as a silent killer, hunting in the Hunger Games style with her bow. But she’s not afraid to stir up a hornet’s nest of enemies when she has no other choice.

The title has some outstanding action scenes worthy of a Hollywood blockbuster movie. Croft is almost always moving in this game, and the action is brutal. Crystal Dynamics sets up some great dramatic moments, like when Croft swims underwater and sneaks up behind a heavily armored soldier. She grabs him around the neck, pulls him under, and proceeds to drown him and break his neck at the same time. Scenes like this keep you on the edge of your couch.

Sometimes you’ll fight battles over and over again, particularly with boss-like creatures, before you can be victorious. Whether you’re riding down zip lines or simply trying to jump from one ledge to another, it’s always a breathless, cinematic experience. I noticed very few glitches during the gameplay or the cinematics, and that’s pretty rare. 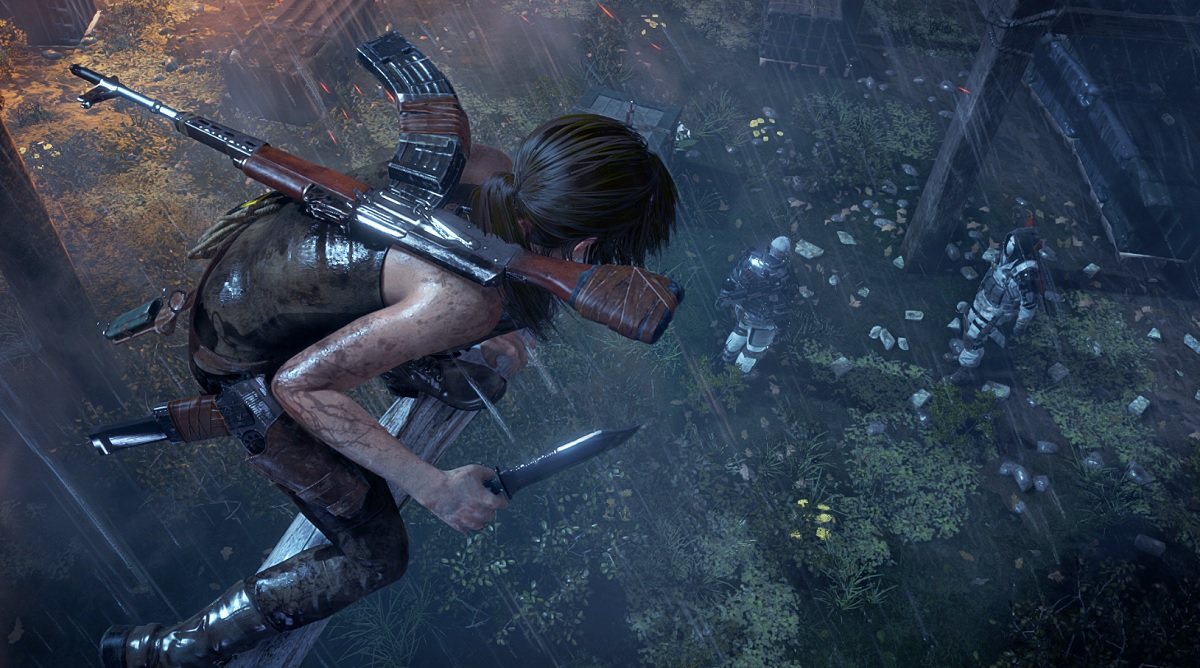 Above: Croft is poised to kill from above in Rise of the Tomb Raider.

In a brutal game, you need good combat. Close combat is sometimes really hard to stage correctly, but Crystal Dynamics’ developers did a good job with it. They use a blend of direct action, such as using the stick and trigger to fire, as well as button-based actions that would otherwise be just too complex for people to pull off. For instance, if a soldier passes underneath Croft while she is hiding in a tree, the player pushes the Y button. Then, croft executes a silent execution, jumping down from the tree and taking out the enemy with a knife in one fluid motion. You can also fight at longer ranges, using the bow or guns.

You never have an overabundance of ammunition. That means you have to switch between weapons, such as the trusty pickaxe, the bow and arrow, a pistol, a shotgun, or an assault rifle. In each battle, Croft barely survives, and she is almost always outgunned. She has to craft together tools like poison arrows. She can use fire and Molotov cocktails or makeshift bombs. Croft has to hide behind cover or get mowed down by bullets. Too often, you find through trial and error that head-on assaults will only end in death.

But the levels are large, almost like open worlds. Croft has a lot of room to maneuver in secret. During this action, the animations look awesome and the gameplay is fast and furious. That’s a hard combination to execute in a video game.

An abundance of puzzles

When Croft traverses sheer mountain cliffs with her pickaxes, we get a sense of her athleticism and physical heroics, Hughes said. But when she’s solving archeological puzzles, we’re exposed more to her brilliant mind and academic knowledge. You have to be just as clever as Croft. You have to figure out how to get stubborn doors to open or cause huge structures to collapse. You have to break down gates with huge trebuchets — but only after you’ve figured out how to shake them loose and aim correctly. Some of these puzzles are maddening. But I always managed to figure them out without going to a tip sheet for help.

You can find relics hidden in the landscape that tell the story of those who came before Croft, searching for the same prize. You can uncover maps that show you hidden elements like resources or alternate tombs and caves. You can go back to places you’ve already visited and find everything in that location. An interesting fact about the sheer volume of material in the game: I finished the main story, and I was only 66 percent done with the content. 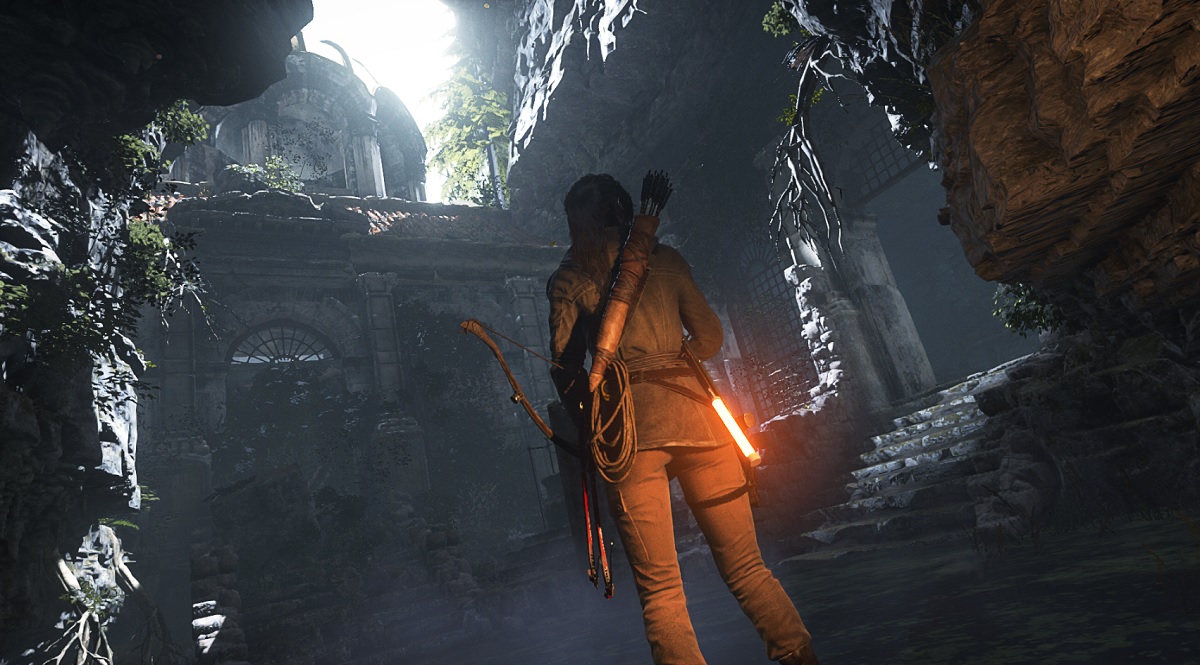 Above: Oh, another wall to climb in Rise of the Tomb Raider.

You’ll do a huge amount of climbing in the game. And as I mentioned, it’s kind of fun. But it gets old. And I always feel a sense of deja vu. It reminds me of Nathan Drake, climbing the buildings and rooftops of the Uncharted titles. When you walk along ledges and almost fall off, it feels like Uncharted. And Uncharted itself can feel like Raiders of the Lost Ark. The secretive Trinity organization reminded me of the sinister secret society in Uncharted 3: Drake’s Deception. And heck, an annoying helicopter gives Croft a hard time on multiple occasions, much like Uncharted 2: Among Thieves. When I get these feelings, it makes me feel like adventure titles are derivative. I could use a lot less of this tiresome traversal and these scenes I’ve seen before. These derivative situations make me feel like I’m in a video game, caught in an endless loop, and not in an immersive virtual world. I want more story material that makes Lara Croft’s experience like no other.

This gets me to another complaint. When Croft finds a hidden passage, she hits it with her pickaxe and pulls it open. Stones fall to the floor. The first time you see this, it’s kind of cool. The 20th time you see it, you say, “Couldn’t they have created some other kind of animation?” The same feeling arises when you see Croft die. She falls into a pit and is impaled on a spike. It’s a gruesome image. Do I have to see it every time I fall into a pit? 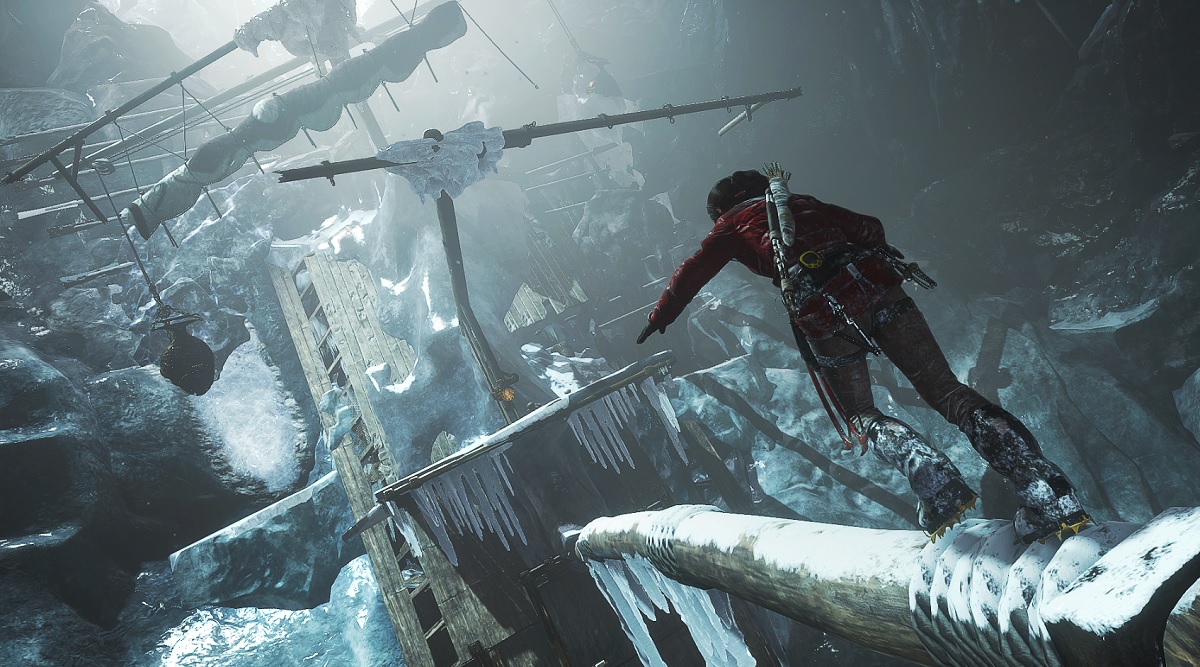 Above: Croft makes her way to a Byzantine vessel lodged in the mountains of Siberia in an alternate quest.

Sometimes, when you’re in a rush to finish the story, you can opt not to explore alternate tombs. These can be fun adventures, but they aren’t necessary to the completion of the story. In one alternate tomb in the midst of the caverns of Siberia, I finished the quest in just a few minutes. Sometimes I skipped the alternate paths, only to run into a brick wall in the main story. It made me wonder if the solution was hidden in the alternate path. So, I would go back and spend a long time searching the alternate tomb, only to find it held no answer for me.