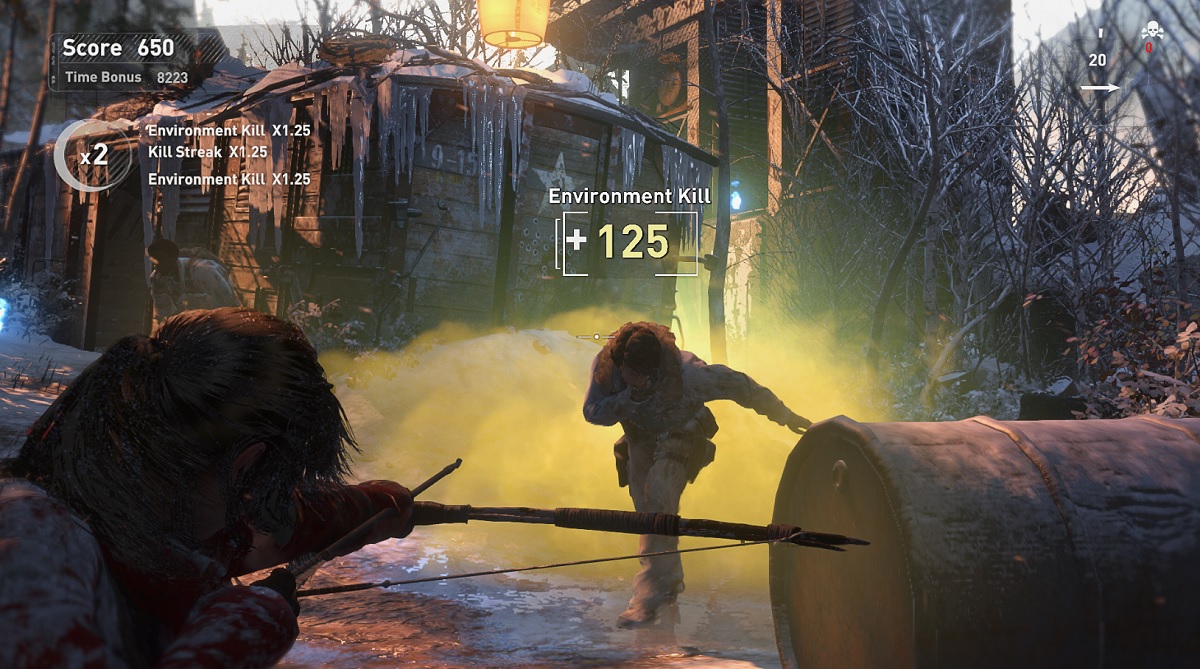 Above: Using poison arrows in Rise of the Tomb Raider.

Lara is a little too tough

I like Lara Croft because she’s tough. But she’s a little too superhuman at times. She falls down cliffs, gets buried in avalanches, gets knocked around by bad guys, and gets shot a lot. But she doesn’t die. She bounces back. And in no time at all, she’s OK. I realize this is a video game. But it ought to be a little more realistic. Like in our last review of the 2013 game, written by former GamesBeat writer Rus McLaughlin, “Somebody must have recorded a thousand hours of assorted grunts, groans, gasps, screams, shrieks, whines, sights, and labored panting for Tomb Raider.”

The lack of multiplayer

Multiplayer for the previous game was acceptable, but it wasn’t nearly as fun as some other titles. After all, not everybody can be Lara Croft in a multiplayer match. That’s the problem of having such a strong and iconic character. It was probably the right decision for Crystal Dynamics to focus on making the best single-player campaign they could. But it probably means that people won’t play Rise of the Tomb Raider for a long time. You’ll be able to compete in some ways with your friends through challenges, but that’s not much of a consolation. Still, what’s missing in multiplayer is more than made up for by the replayability of the campaign.

Each setting is big, but we should have more of them

The game really has only three environments. These include the desert of Syria and the dangerous snow-capped mountains of Siberia. In particular, we spend an awful lot of time at an old Soviet gulag installation before moving on to a third location. The problem is that the Soviet installation isn’t all that interesting. I treaded over the same old ground many times, going back and forth, more than I really wanted to. I’ll explain that more in the next section. Rather than retread some old place, I would rather stumble upon something brand new. When I’m playing as Croft, I want to see the whole world, not just a Siberian gulag. 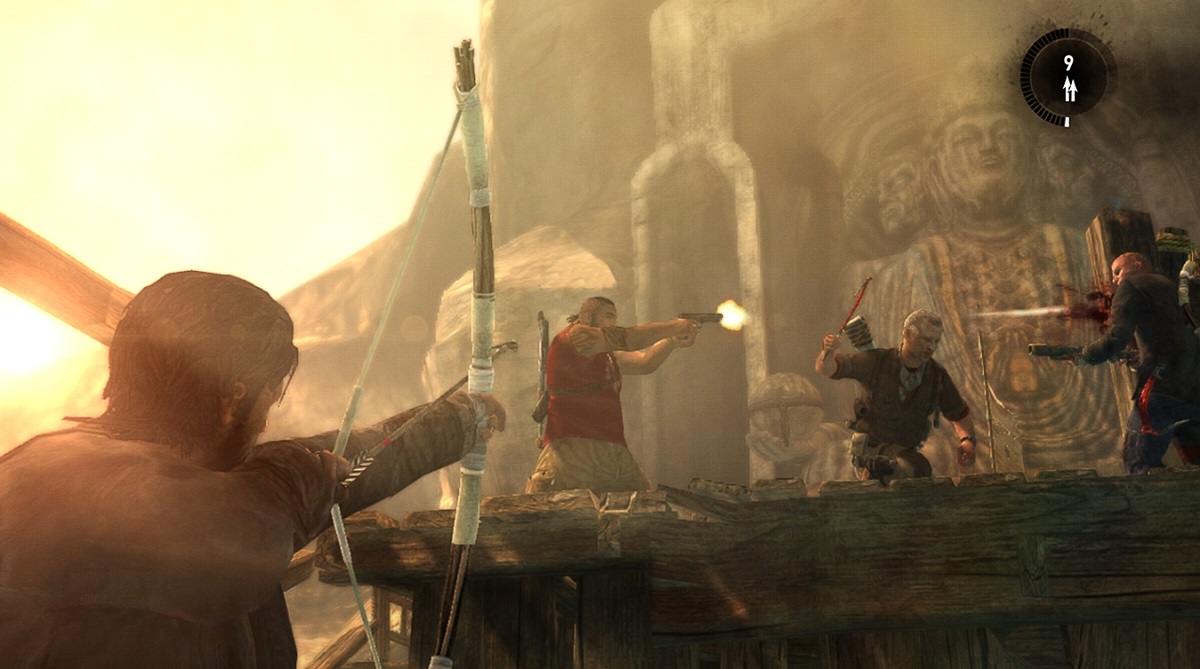 Above: Rise of the Tomb Raider would be much more engaging if it had good multiplayer.

You find a new location, then go back

This problem first hit me when I climbed to the top of a cliff around the Soviet installation. I came to a wall that I couldn’t traverse. I was duly notified that I needed “climbing arrows” in order to make further progress. These are arrows that are so sturdy that you shoot them into a wall and then stand on them to climb up. So I had to go down, find out how to get those arrows, and do many other tasks. I eventually found the climbing arrows and had to go up the cliff. That was really a waste of my time.

I also had to do the same thing when I came upon a barrier in a cave. I was told I needed “rope arrows” to proceed. You shoot these arrows into a set of ropes, tug on them, and bring down an entire structure. Still another time, I had to burn away a barrier. This was my own fault. But I didn’t realize that I could take a bottle, light a rag, and turn it into a Molotov cocktail. Once I figured out how to do this, I had to make my way back into the depths of a tomb to burn the barrier in question. I had simply missed the prompt that showed me how to do it.

Even worse, sometimes you use all of your ammo in a firefight, and find you have too little to fight the next boss. These are small things that really annoyed me, and it lessened the whole experience. 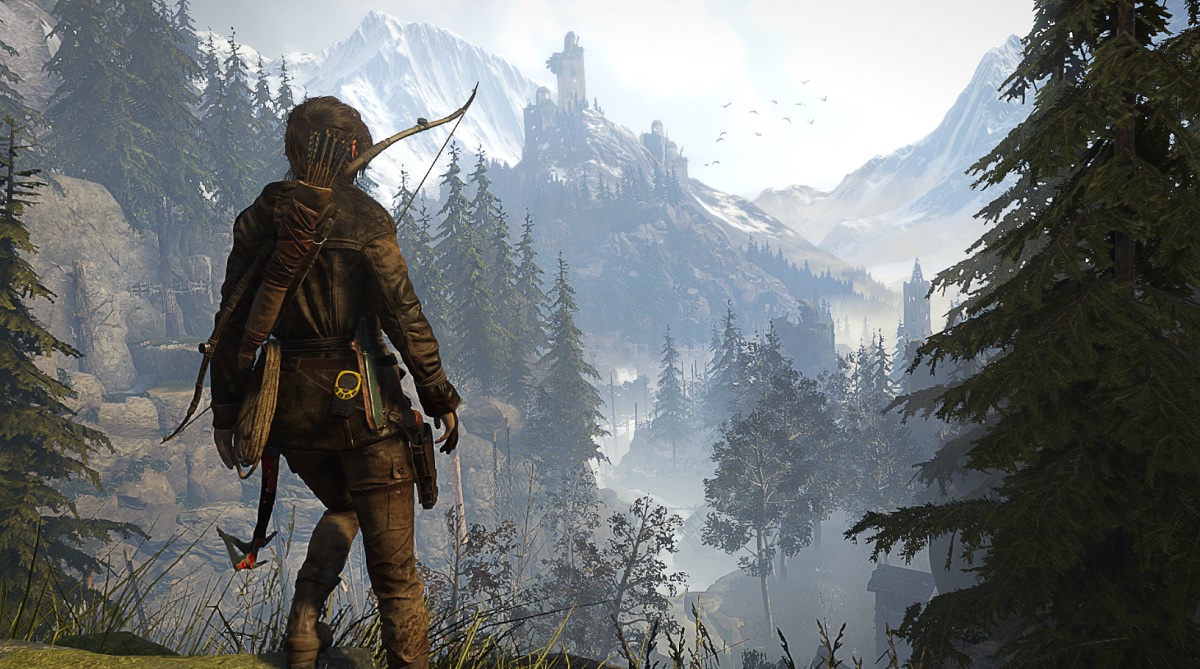 Above: Croft looks across a valley toward a distant goal in Rise of the Tomb Raider.

Lara Croft has grown up. She’s a one-woman army who shouldn’t be underestimated. All of the forces of Trinity are arrayed against her, and yet she finds the courage to take them on. She raids tombs but not in the name of enriching herself. She’s trying to uncover ancient secrets and fulfill the goal that her father failed to reach. She has lost both parents, but she still wants to make her father proud. She’s so much more likable than the cocky Lara of later years. I hope she doesn’t grow up too fast. I would gladly play another title in this coming-of-age saga.

Rise of the Tomb Raider is an epic adventure, and it’s a story well told and well played.

Rise of the Tomb Raider releases on November 10 for Xbox One and Xbox 360 with PlayStation 4 and PC versions coming at a later date. Microsoft provided us with a copy of the Xbox One game for the purpose of this review.
1 2 3 View All