Publisher Bandai Namco has always been risk-averse with its long-running Tales series, and the latest entry, Tales of Zestiria, is definitely no exception.

The role-playing game, which is available now for PlayStation 4, PS3, and PC, can be best described as comfort food. It reliably delivers plenty of Japanese-RPG tropes that fans of the series long for; Bandai Namco wouldn’t continue to localize these games otherwise. Yes, Zestiria contains a story that’s anchored in friendship and revolves around a “farm boy” (named Sorey) who needs to save the world from evil. Yes, all of the characters are caricatures that are way too cheerful and corny for their own good. And yes, you’ll be raiding a ton of banal dungeons and leveling up your characters for hours on end in order to defeat a boss.

But Zestiria does manage to introduce a few new exciting changes that do a great job of spicing up this rusty formula. It’s unfortunate, however, that these additions end up wasted on a largely by-the-numbers game.

The best aspects of the Tales games are always, arguably, their fast-paced and action-packed battle systems. The series’ traditional Linear Motion Battle System combat — which has you dish out some devastating brawler-type combos in real time using weapons and magic (Artes) on an enclosed field — is intact in Zestiria, but it does introduce a great new feature. Called Armitization, it allows Sorey and his human companions to fuse with their seraphic friends (a race of angelic, supernatural humanoids) to become powerful entities while fighting, Dragon Ball Z-style. 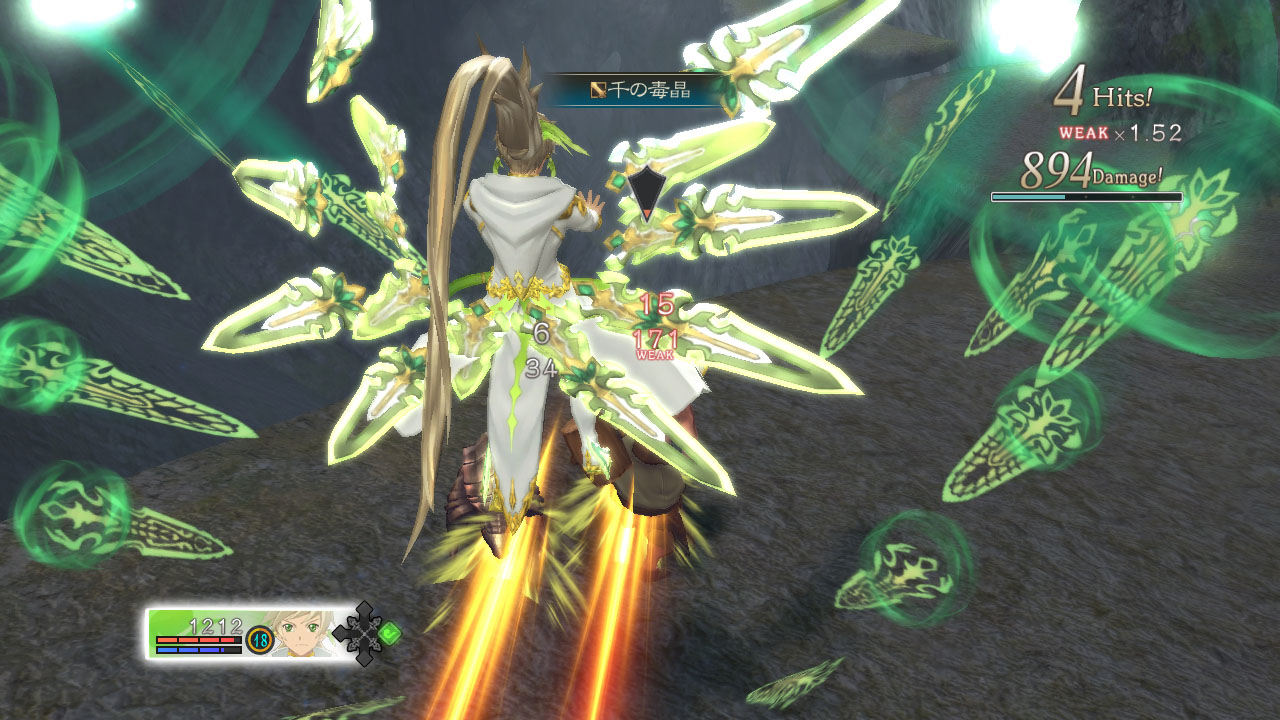 These Armitized beings have some truly powerful attacks and are incredibly fun to play as. Some of their spells are wonderfully over-the-top and visually stunning. Their character designs are also delightful to look at and easily outshine the rest of the game in terms of art style and originality.

The seraphim add a slight new strategic wrinkle to the battle system. Each is tied to the basic elements (fire, water, earth, wind), and so you have to decide if you want to fight alongside them and maximize your combos and make them more varied, which is key to increasing your damage, or if you want to just fuse with the seraphim in order to gain a huge HP boost. Battles are all about deciding between these two different ways of fighting, and this forces you to take advantage of elemental weaknesses.

Getting ready for combat is also enjoyable as Zestiria has plenty of customization options. Each piece of equipment (weapons, armor, and so forth) has four skill slots, three of which can be filled however you want. Mixing and matching your inventory will result in different additional effects and skills that can be used in the battlefield.

For example, some equipment types can only be obtained by fusing two similar accessories. Fusing one item that has Spirri, which grants you a focus boost, and one item that has Gillium, which reduces stun time, will end up giving you an item that has the Releeph skill, which gives you faster HP recovery when you use your Blast Gauge. Zestiria encourages you to constantly try out different combinations as it employs a skill sheet that shows you different ways to stack or arrange your skills for the best results. Also, using a certain shop to buy items will level it up, which will unlock higher-end items. It’s a clever little feature.

Zestiria contains an open world, which is a contrast from past entries’ linear corridors and overworld areas. You’ll be exploring a nice variety of locations, such as gloomy swamps and vivid deserts. This design gives Zestiria a sense of immersion that isn’t present in previous Tales games. You’re also constantly rewarded for exploring these vast areas. Treasure chests and stat-boosting herbs can still be found, but Zestiria also includes cute little critters called Normin tucked away in corners that will grant special skills to equipment. 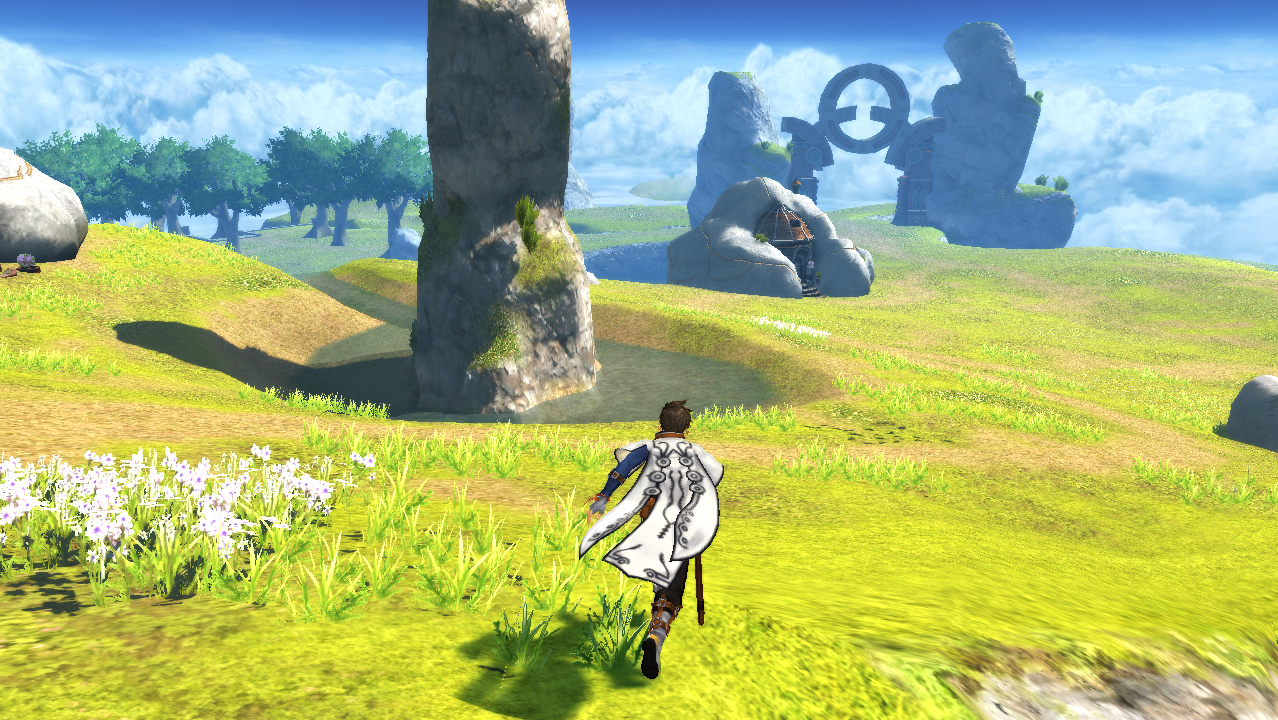 Above: It’s time for an adventure.

The biggest flaw with Zestiria’s design is its truly bland, short, and downright awful dungeons. It’s boring to explore monochromatic walls and right-angle corridors dozens of times. Most of the puzzles within these dungeons are only used as cheap paddings to make these areas appear more complex, varied, and longer than they really are. Exploring them is a chore as they offer very little direction, forcing you to search for frustrating clues. One infamous dungeon contains invisible eyes on the walls that, if they spot you, will transport you all the way back to the beginning if you don’t use your protective bubble. These dungeons make Zestiria feel uneven as the rest of the areas in the game – towns, villages, and the vast open-world – look and feel more inspired and interesting.

It also doesn’t help that Zestiria looks like a PlayStation 3 game released in 2012. It’s quite ugly at times, and even though I’m not necessarily one to care too much about graphics, I couldn’t help but constantly notice the game’s severely outdated look, especially with a PlayStation 4 controller in hand. It makes exploring those boring dungeons even worse.

The story ends up being a disappointment 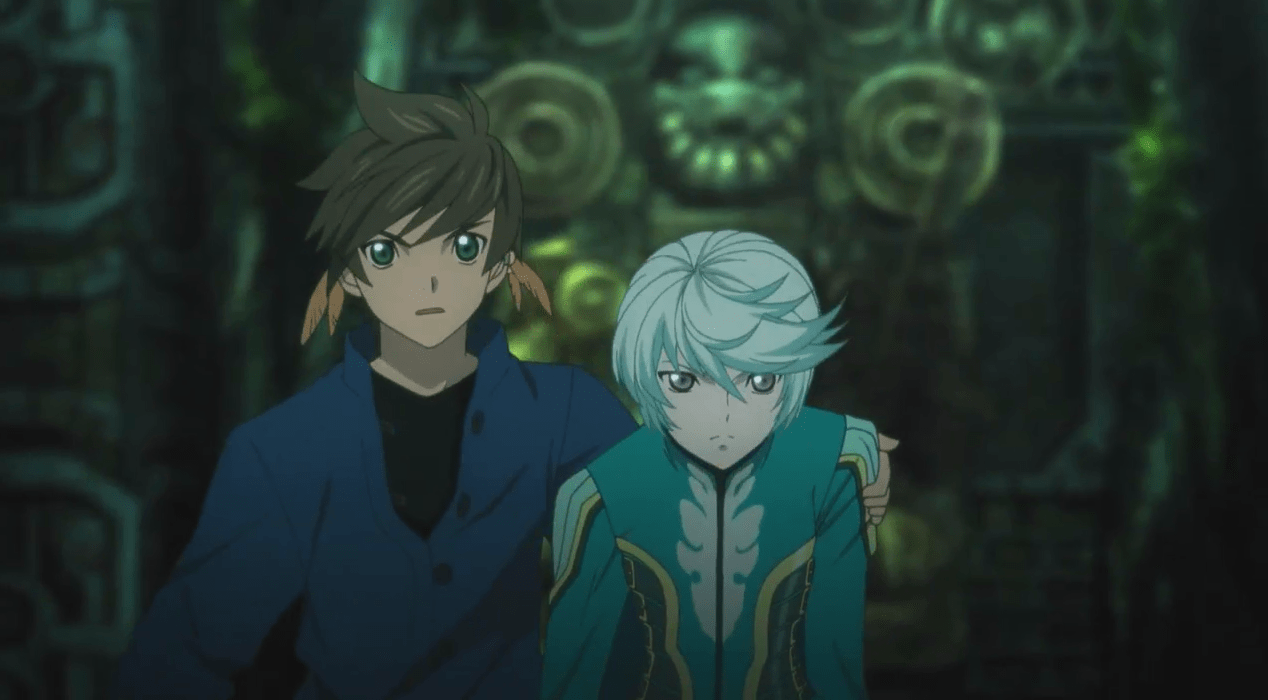 The story is as cliched as they come. It fails to deviate from the typical theme of an innocent country boy who has to set out on a dangerous journey in order to save everyone from some generic evil presence — which in this case is literally called the Malevolence. Sorey discovers, for whatever reason, that his upbringing makes him the prime candidate to assume the role of a world-cleansing savior known as the Shepherd.

After Tales of Xillia’s futuristic focus, Zestiria takes the series back to a medieval setting replete with references to King Arthur and battles with Greek mythological creatures. This change is quite fine on paper, but given how zany and interesting Xillia’s worldbuilding and characters were, I can’t help but think that it was the wrong decision to return to high-fantasy roots. The dialogue is dull and the writing relatively poor, and Sorey and his brother Mikleo are bland. In fact, the entire cast lacks spark and chemistry aside from assassin Rose and outlaw Dezel’s curious relationship. Dezel is a seraphim of wind who remains by an assassin’s side (Rose) for some interesting reasons. I found this story beat to be quite intriguing mainly due to the reasons behind their partnership, and the plot twists that result from it.

Tales of Zestiria isn’t exactly a carbon copy of its competent and enjoyable predecessors, but it still fails to bring enough exciting new changes to the tried-and-true JRPG formula. The game plays it way too safe. The new additions are genuinely clever and great, like the fantastic Armitization-fueled combat system and mammoth open-world design, but it just isn’t enough. Zestiria feels like a downgrade from Xillia and is a sign that this series needs to do a lot more to stay relevant.

Tales of Zestiria is now available for PlayStation 4, PlayStation 3, and PC. Namco Bandai provided GamesBeat with a review copy of the game for the purposes of this review.