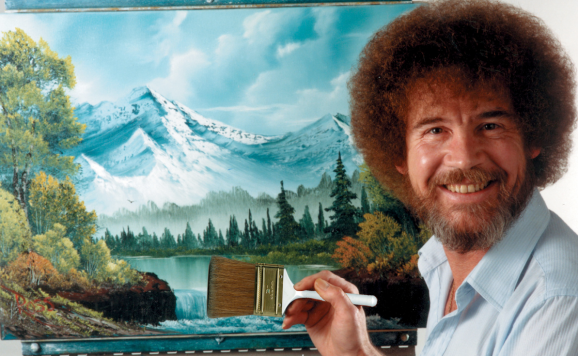 Bob Ross, not painting a scene from DayZ.

Gameplay livestreaming site Twitch took a risk nine days ago when it announced Twitch Creative, a new platform that enables musicians and artists to livestream their works in progress. They celebrated the launch with a live broadcast of all 403 episodes of the TV series The Joy of Painting, hosted by artist Bob Ross, a series aired originally on PBS.

Twitch draws more than 100 million people a month to view live broadcasts of video games. But the social video platform has experimented beyond that core audience as part of an expansion plan that takes its technology to new kinds of creators.

The Bob Ross broadcast, enabled by Janson Media and Bob Ross Inc. to honor the memory of Ross, was watched by 5.6 million unique viewers for 545.9 million minutes. About 3.8 million KappaRoss emotes were used in chat sessions, 7.6 million chat messages were sent in the Bob Ross channel, and up to 183,000 viewers watched at the same time.

Twitch Creative is a dedicated landing page that highlights the streams of broadcasters who aren’t in gaming, such as artists who share their creative processes while they’re working or videos of musicians rehearsing.

Given the response, Twitch will start showing the Bob Ross videos every Monday night, starting at 3 p.m. Pacific time and ending at 9:30 p.m. Pacific time. There are 31 seasons, so repeats will happen only once every seven months. Proceeds will go to the rights holders; the Root division, a local arts organization supporting artists as well as teaching children the arts; St. Jude, a cancer research organization; and Twitch Creative community support.