In World of Warcraft: Legion, the first four to five people or groups who attack a creature each get its loot and quest item drops, even if they’re not in a party with any other players. It’s a godsend in a crowded new starting area, where competition for quest monsters to kill always becomes fierce.

Quest givers in the demon hunter starting area, at least for the demo, also had the same “aura of no mounts” that some significant quest givers had in Warlords. That means no one can go summon a gigantic mammoth mount with their demon hunter and park it on top of the quest givers you need — they poof automatically. Flying mounts won’t work in this or any other Legion zone to start.

The zone itself is like Shadowmoon Valley (the Outland version), with craggy black mountains and lots of green fel lava. That’s not too surprising, since the events surround a demon invasion of Black Temple, which becomes a base to be defended. 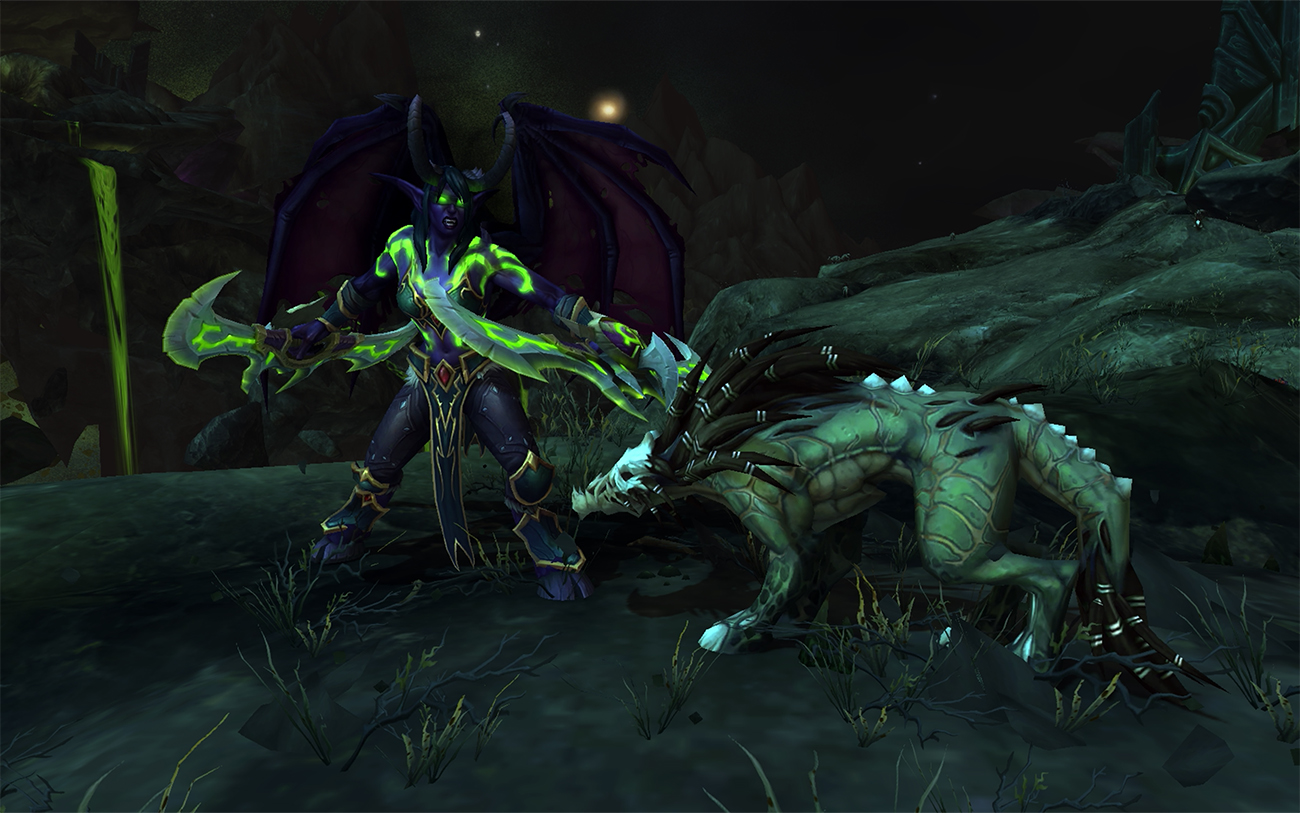 Above: Take that, demon dog.

Demon hunters have two specs: Havoc, which deals damage, and Vengeance, which tanks. Vengeance is still under development, and it’s not available to you until the end of the starting zone. (I’ll talk briefly about what I saw of that spec in a moment.) You play as Havoc throughout the starting area.

You’ll start with a few basic abilities as a demon hunter, and earn a few more as you work your way through the starting zone. Demon’s Bite is a quick attack that does about 5,000 physical damage and builds 20-30 Fury, the resource demon hunters use (it’s similar to warrior’s Rage).

(LeCraft again: “Like rage. You throw in a little smoldering hatred and a dash of purple.”)

Chaos Strike is your initial Fury spender. It does 18,000 damage and costs 40 Fury — unless you get a critical strike, in which case it’s free. Your initial starting zone gear gives you enough critical strike stats to have a 25 percent chance for a freebie.

It’s a super-fun mechanic in terms of being able to sometimes spam that ability, but I found that it made it necessary to keep one eye on your Fury bar the whole time you’re fighting so you don’t waste procs by using Demon’s Bite when you’re already full of Fury.

Watching bars isn’t much fun for melee. If Blizzard doesn’t include a much more visual critical-strike effect for demon hunters (right now the bar flashes when it’s full, but that’s about it), I foresee players using mods to add heads-up notifications.

A side note: You chance to hit an enemy can be an issue, at least to start. I was level 98, and the monsters I was hitting were level 98, and I was missing a notable percentage of the time.

Demon hunters are incredibly mobile, and I spent a good amount of time in the starting zone just jumping off things. For starters, they double-jump, the only Warcraft class to do so, and it’s surprising just how fun that turns out to be. Hold down the spacebar while jumping or falling and you’ll glide on demonic wings. It’s easy to fall into a jump-jump-glide pattern. (Notably, the cosmetic single-jump night elf flips and blood elf spin-jumps don’t appear to work for demon hunters — or at least I didn’t notice them, possibly because of this mechanic.)

If you’ve ever done the large-group raid dungeon Blackrock Foundry, you’ve seen people use goblin gliders to sail down the passages leading downward. Being a demon hunter is like having a permanent goblin glider. It’s fairly awesome anytime you’re running downhill.