Ben Brode has a booming voice that sounds like it could shake the earth itself. On a massive stage at this year’s BlizzCon fan convention, the senior game designer regaled a large crowd with an enthralling story.

Within the Dwarven city of Ironforge is the greatest museum in the world. A hardworking cartographer is looking for the powerful Staff of Origination. She’s gone on hundreds of expeditions and discovered all sorts of ancient items for the museum, but even she can’t find the staff on her own. You must help her look for it by avoiding traps and defeating monstrous enemies in dangerous locales.

It’s an exciting story that, if you didn’t know any better, sounds like the plot of a blockbuster action adventure game. In reality, it’s the backstory to the League of Explorers, the latest single-player adventure (out Thursday, November 12) for Blizzard Entertainment’s popular online card-battler, Hearthstone: Heroes of Warcraft.

Though it’s set in the World of Warcraft role-playing universe, Hearthstone isn’t the kind of game you play to experience a story. You collect cards and use them to battle other players online. But Brode’s stage presence was so impressive that when I met up with him and senior user interface designer Derek Sakamoto for an interview, I had to ask how much of that story would be in the game. With a hearty laugh, Brode told me he embellished some of that narrative for the panel.

The actual tale is much simpler: grab the pieces of the staff by surviving a series of challenges. I was slightly disappointed to hear that. But League of Explorers is still an important milestone. While some of the characters and bosses you’ll meet are from World of Warcraft, the developers created new heroes and villains just for this expansion, much more than they did with previous the adventures, Curse of Naxxramas and Blackrock Mountain.

Surprisingly, one of the core ideas behind League of Explorers predates Hearthstone. 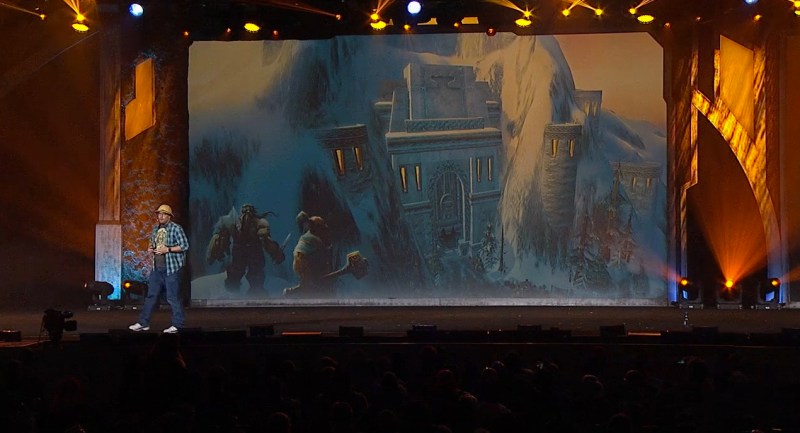 Above: Brode talks about the city of Ironforge at BlizzCon 2015.

Focusing on a smaller corner of Azeroth

In 2011, when Blizzard had a 2D prototype of Hearthstone with basic rules, the developers were experimenting with different mission designs. These were the precursors to solo adventures like League of Explorers.

“One of those missions was a very adventure-y, explorer-y trek through a temple where you had to choose — ‘Do I go left, or do I go right? Do I swing over the spikes, or do I crawl [through them] gingerly?’” said Brode. “We took that feeling of exploring a temple and making new choices as you go through it and brought that to Hearthstone four years in the future. We’ve been waiting for the right time [to bring it back] because we knew it was super-fun.”

The mission fits in well with the pulpy Indiana Jones vibe that Blizzard is going for. But deciding on a theme and setting was also a bit different for League of Explorers. Typically, when the designers comes up with these add-ons, they start with a blank whiteboard. They write every “awesome thing” they can think of (and not-so-awesome things as well, according to Sakamoto) until something pops out for them.

The idea for the latest expansion came from Chris Metzen, Blizzard’s senior vice president of story and franchise development. Metzen was excited about adding World of Warcraft’s Explorer’s League to Hearthstone because they didn’t get a chance to talk about them much within World of Warcraft’s fiction. 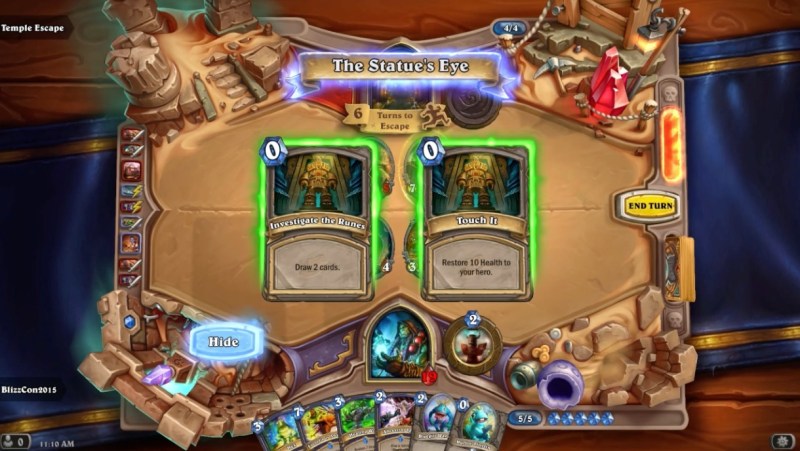 Above: You know you wanna touch it.

Gambling with your life

With Brode and Sakamoto as my coaches (I’m not a good Hearthstone player), I tried out the revamped 2011 mission. The most unusual thing about it is that you’re not fighting a computer-controlled boss. You’re escaping a crumbling temple with one of the pieces of the staff. Instead of attacking the portrait across from you, you have to survive an onslaught of obstacles and minions for 10 turns. I used a custom Shaman Murloc deck that featured some of the new cards (you get 45 total if you can beat all the levels).

The temple itself doesn’t have a deck, but it does have a hero power that summons cards to thwart your escape. You’ll also have to make crucial decisions along the way (as narrated by intrepid explorer Reno Jackson). Some are relatively harmless, like choosing whether to wade through a mysterious glowing pool (and get a Mana crystal back) or to drink from it (draw one card from your deck).

Others are deadly. Early on, I came across a pit of spikes. I could either walk through them and suffer five points of damage, or I could gamble by swinging across the spikes (Hearthstone randomly decides whether you take zero damage or 10 damage).

“It depends on how risky you feel,” said Brode.

I went for the latter and … paid for it dearly. I still had plenty of life left, so I wasn’t too concerned. But the hits just kept coming, like when a boulder appeared on my side of the battlefield. Since it always rolled to the left, I had to make sure to place my minions to the right of it so they didn’t get hurt. A few turns later, the temple’s ceiling collapsed, clearing all minions off the board. It was unavoidable. But it turned out to be a blessing because with my low health, I probably would’ve died the next turn anyway.

“It’s interesting. You don’t actually need a lot of minions because you’re not trying to kill your opponent,” said Brode. “You just need to make sure you don’t die [Laughs]. You play differently when that’s the goal.” 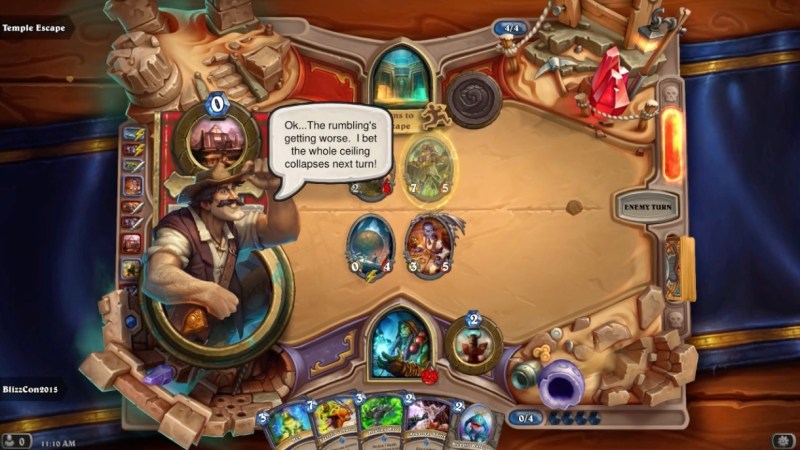 Above: You can blame everything that happens to you on Reno Jackson.

I was playing defense the whole time, trying to use cards that could counter whatever the temple sent in next. Taunt cards (minions that shield you from damage) were lifesavers here, especially when you’re dealing with a sentient statue that has 10 attack points and 10 health points. The last choice I encountered was “Take the Shortcut?”: either you don’t take it, and nothing happens, or you get one turn closer to the exit but face a 7/7 War Golem.

I went for the second choice, but I misread the cards and thought the War Golem would be a random outcome (like with the spikes). Still, things were looking good for me. I drew a 5/6 Master Jouster that solidified my defense (thanks to its Divine Shield, which protects it from hit, and Taunt). But the temple also had a slew of minions on the board — my fate could’ve gone either way. I died with just one turn left as our interview came to a close.

I couldn’t wait to go and try the demo again in the press room (I won the second time around). The increasingly difficult obstacles and dire circumstances reminded me of all the choose-your-own adventure books I read as a kid.

In addition to the usual boss matches, League of Explorers will have two of these race-against-time missions. They’re such a radical departure from anything else Hearthstone has done before. Brode said the team is trying to take risks and do “cool new stuff” to keep players engaged. With 40 million card-slinging players to date, it seems like Blizzard will have no trouble hitting its goals.