Sólfar Studios announced today that it has received a seed investment of €2 million, or $2.15 million, to make new virtual reality games and other apps. The money came from an investment syndicate that includes both Asian and Nordic investors.

One of the company’s cool projects is a demo of Everest VR, a virtual reality travel adventure app that makes you feel like you’re part of an expedition climbing Mount Everest.

“It´s a privilege to welcome a strong and visionary investor group from the Nordic countries and Asia to fuel our growth into the fascinating field of VR,” said Kjartan Pierre Emilsson, the CEO and cofounder at Sólfar, in a statement. “By benefiting from their strong network, experience, and access to a global talent pool, we are dramatically accelerating Sólfar’s ability to create trailblazing content for this medium of the future.”

I tried out the Everest VR app in a demo with an Nvidia-equipped PC and the HTC Vive virtual reality headset. With Vive, you can walk around while wearing a head-mounted display. So in the demo, my first move was a terrifying step forward over a ladder that was bridging two cliffs of an ice chasm on the lower slopes of Everest. I felt that sense of “presence,” or the feeling that I really was there. It was made more realistic by the Vive’s hand controllers and the fact that the system was tracking me as I walked around.

It was very realistic, using photogrammetry. Solfar teamed up with RVX, which has created a graphics processing unit (GPU)-accelerated database of more than 300,000 high-resolution photos of the mountain. RVX created a 3D mesh and textures for the VR app.

Solfar and Nvidia plan to collaborate on the production of the Everest VR app by using Nvidia technologies such as VR SLI, multi-res shading, and other techniques that exploit the Nvidia GTX 970 and Titan X GPUs.

Founded in October 2014, Sólfar’s mission is to create and publish “pure VR games and experiences that thrill players,” the company said.

“We see virtual reality as the new medium to bring fully immersive alternative worlds to the mass population, and high quality, breathtaking content created by innovative studios like Sólfar provides entry to those worlds,” said Tianqiao Chen — the founder, chairman, and CEO at Shanda Group — in a statement. 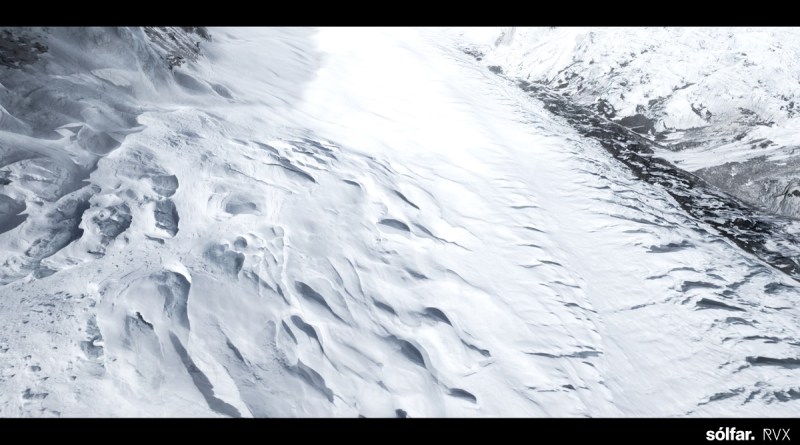 Sólfar’s Reynir Hardarson previously cofounded CCP in 1997 and was the company’s global creative director; Kjartan Pierre Emilsson built CCP´s Shanghai studio and was the lead game designer on the original team behind EVE Online; and Thor Gunnarsson was most recently the vice president of business development at CCP.

“We see Sólfar as one of the rising stars of the Nordic gaming community,” said Helga Valfells, the CEO at NSA Ventures, in a statement. “Iceland has a growing game developer community that is known for embracing cutting-edge technology and taking a creative and artistic approach to gaming. As a fund, we are very excited about VR and believe that the Sólfar team has the right skills to build a global VR success story.”

Back in April, Sólfar showed off a VR game dubbed Godling. And now the company is revealing Everest VR, its second product, at the VRX conference in San Francisco. The title is currently in production with Reykjavik-based visual effects and animation studio RVX. Everest VR is geared to consumers who are interested in virtual exploration. It will debut in 2016.