Rodea the Sky Soldier has had a laborious gestation.

The action/adventure game was originally announced for the Wii and Nintendo 3DS back in 2010 as a joint project between Sonic the Hedgehog creator Yuji Naka’s Prope studio and Japanese publisher Kadokawa Games. Though completed in 2011, it was shelved indefinitely, Naka said around that time that he wasn’t sure what would become of the project. It reemerged in 2014, however, retooled as a Wii U and 3DS game. It’s been a long time coming, but sadly, the Wii U version of Rodea doesn’t live up to five years of anticipation. 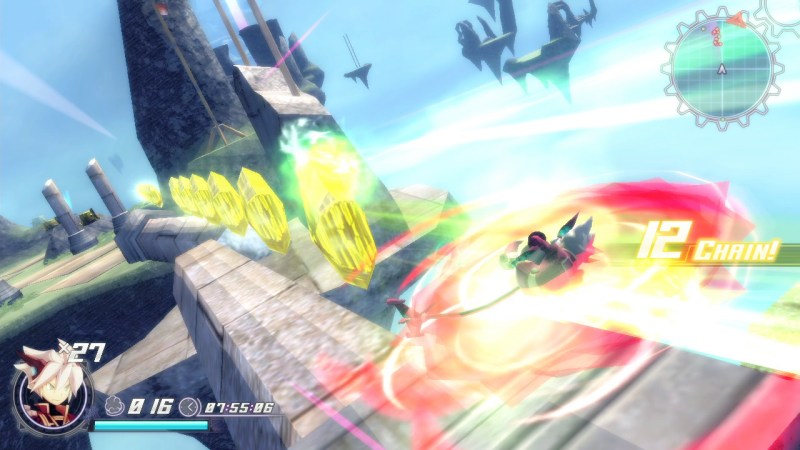 Above: Grabbing oodles of gravitons in one go is one of Rodea’s satisfactions.

The mechanized, skybound realm of Garuda is pure fantasy, far removed from any notion of gritty realism. Huge landmasses hang suspended in the air, intriguing ruins of civilizations past dot the skyscape, and mechanical fish swarm through the sky. You see a dreamlike quality to everything in Rodea’s skylands, and it’s fresh and appealing. It’s worlds like these that games are best at creating, yet they’ve largely fallen out of favor of an emphasis on realism — Rodea works as a reminder of how delightful exploring an imaginative environment bound only by its own rules can be.

Blasting through the air is lots of fun

Many of the games Naka works on have an emphasis on capturing the fun of movement, such as momentum and speed in the Sonic series and flight in Nights Into Dreams. Rodea is also about flying, but in a different form than that of Nights. Here, it focuses on the thrill of blasting off like a jet engine, shooting toward your targets, and crashing into them as a sentient robotic missile. Chaining together your movements is a lot of fun, too: The thrill of jumping up high, careening into an enemy, using the bounce recoil to target a speed booster, smashing into it and turning into an electrified rocket, and then being shot into a string of items that propels you to an entirely new section of the stage is a thrill.

It has lots of sweet secrets

Action games feel more satisfying when they come with lots of places to explore for hidden goodies, and Rodea doesn’t disappoint in that regard. Each level includes several medallions of varying rarity to find and collect, along with hidden bonus doors and collectible parts to upgrade Rodea with on the map screen. The medallions can be used to unlock challenge stages, music, and other goodies. Even though the Wii U might not have any sort of achievement system, Rodea gives you a lot of incentive to probe all over its skyscapes. 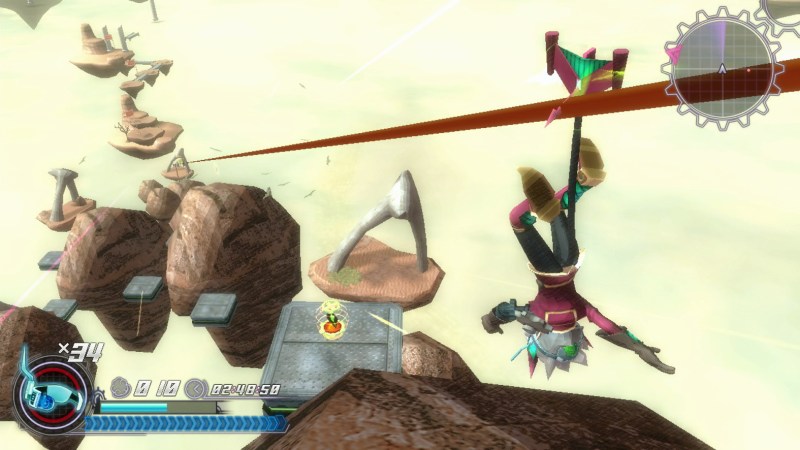 Rodea for Wii U is based on a Wii game that started development in 2010, and it shows. For as imaginative and engaging as the setting is, it really just does look like an upscaled Wii game: It’s laden with rudimentary object geometry and muddy-looking textures. The discrepancy between the concept art and its actual visuals is disappointing. It’s not particularly easy to pick up and play, either: The flight controls take some getting used to, and the rushed tutorial at the beginning isn’t much help.

You don’t always do what you want to do

But even when you do get the controls down, being able to consistently go where you want to and target properly isn’t a guarantee. You aim your flight bursts and attacks with the left stick, but the camera often fights against your best interests. Since you only have a limited amount of flight energy before you need to land, not being able to target quickly and properly is a huge annoyance. This leads to many cheap-feeling deaths as a result of running out of juice and falling off the stage. Attacking can be a big gamble, too: Though it purports to auto-target the nearest destructible object when you tap A then B quickly, it seems just as likely to send you quickly careening off the edge of a level. Rodea has a lot of frustrating moments like these, and since it uses a traditional “lives” system, every accidental death leaves you closer to having the restart the entire (usually fairly lengthy) stage.

The digital version of Rodea is lacking

One of the bonuses included in Rodea’s physical release is the original Wii game. It has numerous significant differences from the Wii U version, such as using the Wii Remote and Nunchuck controls for movement, and is said to be the closest to the creators’ original vision for the product. However, this version is not included with the digital download from the Nintendo eShop. It’s just in the first run of the physical release. Since GamesBeat’s digital review copy did not include this, I did not take it into consideration. 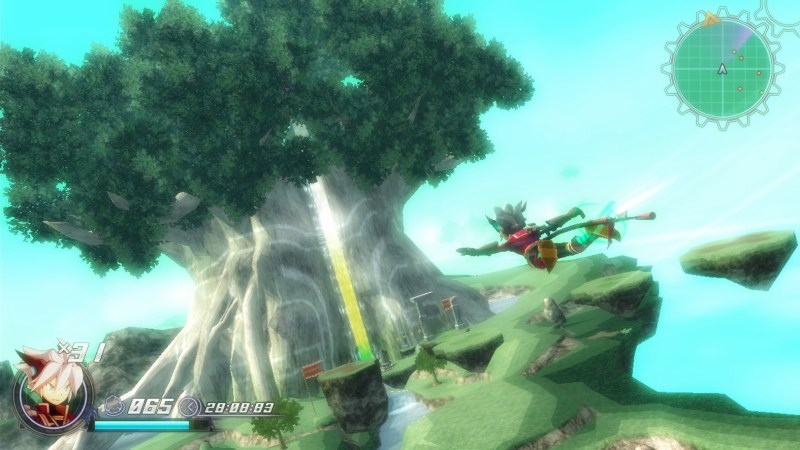 Above: The imagination at play in Rodea’s world is admirable.

The Wii U version of Rodea is simultaneously a game with a lot of charm and one that’s difficult to love as much as you want to. When Rodea works and all of its gears are cranking along smoothly, it’s an exhilarating joy to play. But everything can come crashing down at any time: an enemy encounter reliant on overly finicky aiming or a misplaced attack that sends you careening into the abyss can sour the sense of wonder in a flash.

Rodea’s high points are lofty indeed, but the experience as a whole has too many pitfalls to be wondrous.

Rodea the Sky Soldier is out for the Wii U and Nintendo 3DS on November 10. The publisher provided GamesBeat with a digital download of the Wii U version for the purposes of this review.