It isn’t every day you come across a completely new idea in sales enablement, but today is one of those days.

Along with $1.5 million in seed funding, Spiro has announced today the launch of its new sales assistant app.

But there’s a twist. One that even M. Night Shyamalan couldn’t have conceived.

Spiro — which is available on the Apple App Store today — works as a personal sales assistant. It recommends the tasks salespeople should do at each moment of the day. Spiro was designed on top of a custom-built machine learning engine that leverages existing data in Salesforce, email, and calendars to help salespeople stay on top of open opportunities.

Because Spiro integrates with Salesforce, it understands what salespeople have in their personal pipelines. It allows them to capture actions and engagement with prospects, such as completing a follow-up call or sending an email, within Spiro and then automatically updates Salesforce with all of the details. Since CRM systems carry — by far — the highest total cost of ownership of any marketing technology, automating mundane data entry is a big plus point.

So what’s the twist?

Spiro isn’t your average sales app. First, there are the assistant personalities that you can choose from, which include the Jewish Mother, R-rated, Surfer Dude, Gossip Girl, and Coach. 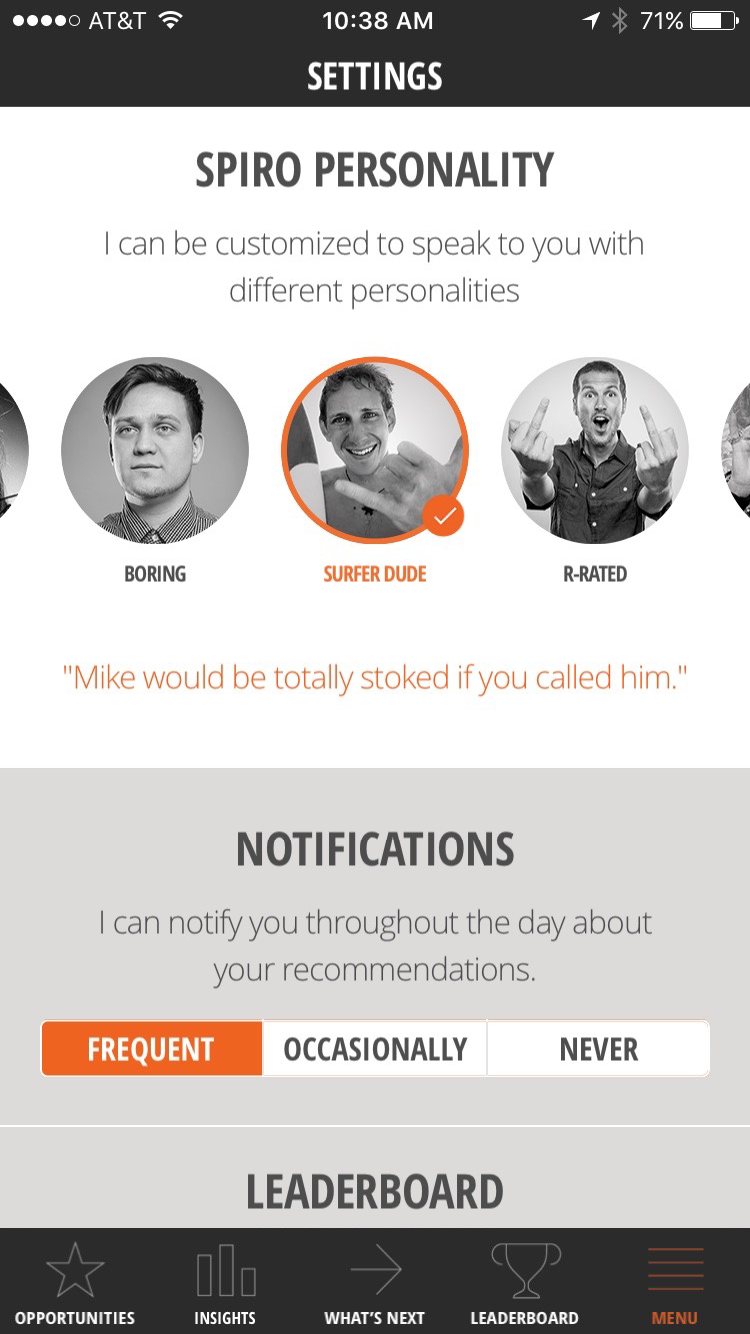 Then, there are the 2,500 jokes that have been embedded in the app to provide humor, motivation, and a little spice.

So why the big focus on humor within the app?

“The majority of salespeople we know are outgoing, engaging personalities who love humor almost as much as they love making money,” Adam Honig, cofounder and CEO at Spiro told me. “In our beta testing of the Spiro app, we’ve seen our users enjoy the jokes and humor so much they’ve been tweeting and texting screenshots.”

And does the choice of personality have any correlation with the type of salesperson?

“The highest performing sales reps use the ‘R-Rated’ personality in Spiro,” Honig said.

For the makers of Spiro, what sounds like a joke is actually a deadly serious business.

“Salespeople are being forced by their companies to use these really boring enterprise applications, which have never told them a joke or shown them a picture of a Victoria’s Secret model,” Honig said. “We find that a little humor goes a long way in motivating salespeople to push past the many obstacles in their way of making more money.”

“We want to show salespeople the image that will motivate them to make the next call,” Honig said. “When a salesperson completes an action in Spiro — a call, an email, etc. — they see a motivational image from a variety of public Instagram accounts, including the Travel Channel, Fitness Magazine, and Vogue, which do also include male models!”

So, while the jokes and the colorful personalities help to motivate the sales team, there’s still an engine behind the scenes that needs to choose the right action, for the right prospect, at the right time. How does Spiro work out what the salesperson should be doing next?

“The founding team of Spiro has built applications which have been used by over 300,000 sales professionals,” Honig said. “We used this knowledge, plus six months of discussion with sales leaders, to develop the algorithms that power Spiro. Spiro analyzes data from the salesperson’s behavior — who he or she has called, emailed, met with — combined with the customer’s response. This is all factored in along with information pulled from Salesforce to make the right recommendation about what he or she should be doing next to make more money.”

The app is available for iOS users now, but what does the future hold?

“We’ve heard from a lot of our beta users that they would like a desktop version of Spiro, which is why we’re developing a Chrome extension,” Honig said. “The Chrome extension will work very much like the iPhone app, except of course it will be harder to hold up to your ear to make a phone call. We are currently in a private beta for the Chrome extension and will be expanding that over the next month. Our engineering team is working hard on the Android version of Spiro and we will be starting a beta program in December. We’ll have more to announce about other editions in the near future.”

So what is Honig’s favorite joke so far? 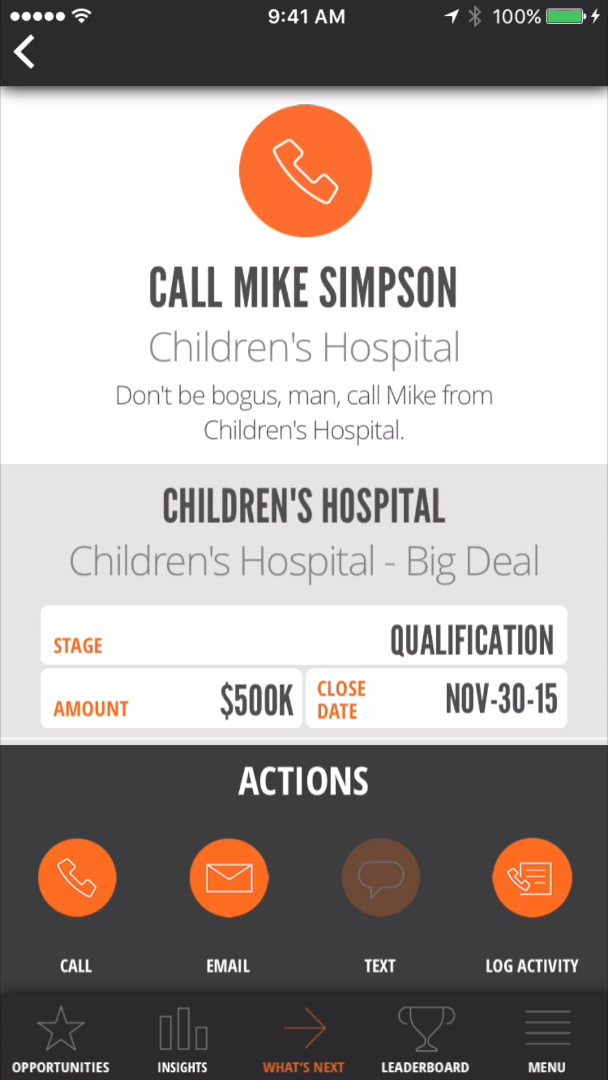 “I use Spiro’s ‘R-Rated’ personality, which is very funny, but often unprintable. The humor is always in the context of a recommendation that Spiro is making to a salesperson. Instead of saying something boring like ‘Call Mike,’ Spiro’s R-Rated personality would say ‘Call Mike and be personable – you know, act like someone other than your sucky self.’ Our comedy writer has written over 2,500 unique messages and jokes across the seven built-in personalities.”

Spiro is available today on the Apple App Store.