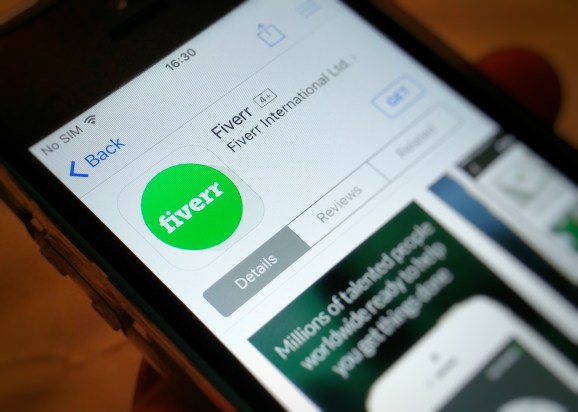 Fiverr, a microtask marketplace for people to buy and sell just about any type of digital service, has raised $60 million in funding to “aggressively attract the vast majority of freelancers who still operate offline,” the company said.

Today’s news takes Fiverr’s total funding past the $110 million mark, and it’s double the amount of its previous biggest round, which came in at $30 million last August. The latest round was led by Square Peg Capital, with participation from existing investors Bessemer Venture Partners, Accel Partners, and Qumra Capital.

Similar to TaskRabbit, Tel Aviv-based Fiverr has carved a sizable niche in the so-called “sharing economy,” letting anyone market their digital skills — such as web design, writing, or marketing — to buyers on the Internet.

Alongside today’s funding news, Fiverr also revealed that freelancers will soon be able to set their own gig prices, as the $5 minimum it has hitherto required freelancers to charge will be removed — this is a notable shift because the company’s name is actually derived from the $5 restriction.

But this will also signal a bigger shift in the pricing structure. In the coming weeks, Fiverr will launch new “easy-to-understand” gig packages across a number of pricing tiers. “This will dramatically simplify the way Fiverr sellers price and bundle services,” the company said in an announcement. “The new gig packages will also help Fiverr sellers easily pocket more cash, create greater value for buyers, and make sellers nimble enough to attract SMBs, entrepreneurs, and even corporate marketing departments.”

Fiverr said it generates around 1 million transactions per month, though it doesn’t reveal the value of these transactions. But the shift to new pricing tiers with a focus on bundles is designed to help workers vie for bigger projects, perhaps with one eye on targeting small businesses. In other words, it’s trying to lure more skilled personnel on board, those with a range of skill sets.

“We started Fiverr to prove that you can bring the world of freelance creative services online and make buying gigs as easy as purchasing a flat-screen TV online,” said Micha Kaufman, Fiverr’s CEO. “Today, we see more freelancers shifting their business online, which grabs the attention of investors, and they’re driving the overall size of the marketplace to dizzying new heights. With the gig economy workforce expected to hit 43 percent of the total workforce by 2020, we’re bullish about the economic opportunities we’ll create in the near future for our community.”