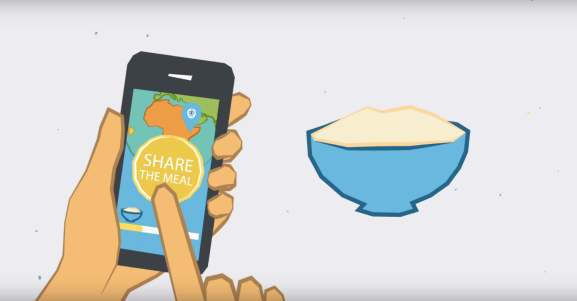 With the ongoing refugee crisis in Europe and the Middle East, some tech companies have put their fundraising efforts behind humanitarian assistance. Building on the success of these campaigns, the United Nations World Food Programme (WFP) is using tech to help the cause by launching a mobile app that lets you feed a refugee child with just a tap.

Called ShareTheMeal, this mobile app allows anyone to virtually “share” the meal they’re having, whether that’s breakfast, lunch, or dinner. “The simple act of sharing a meal is how people all over the world come together,” said WFP executive director, Ertharin Cousin. “This digital version of sharing a meal is a tangible way that Generation Zero Hunger can act to end hunger.” 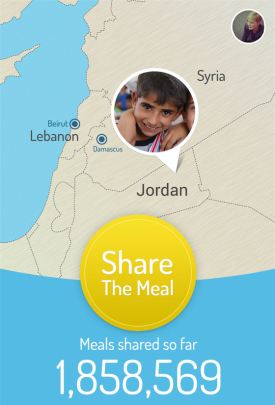 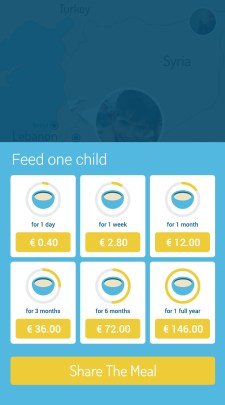 Just by tapping a button on the ShareTheMeal mobile app, you can make a donation to the WFP. Choose how much you’d like to give based on how many meals you want to provide: Approximately $0.50 will feed a child for an entire day, $3.00 for a week, and $12.00 for an entire month.

Contributions will benefit Syrian refugee children in Jordan who participate in the WFP’s school meals program. The organization’s goal for this specific campaign is to provide school meals for one year to almost 20,000 Syrian children in refugee camps. The goal is to keep them fed and in school where they can continue to learn.

The app will also show you the progress of your efforts and how your contributions stack up against those of your friends, which it’ll pull through Facebook’s Login system.

ShareTheMeal started in 2014 as a product of the WFP’s Innovation Accelerator. The startup has now become part of the United Nations organization, and today its namesake app is going to be launched to the global public. The immediate focus is on refugee children, but the larger goal is to end hunger. Around the world, 1 in 9 people currently don’t have enough to eat.

The organization says that right now it has over 100,000 active users who have contributed to providing 1 million meals worldwide. And since we’re so fond of having our smartphones at the table when we’re eating, the WFP wants us to better enjoy our own meals by sharing our good fortune.

“People use their smartphones to buy books, groceries, and to pay their rent. So why not use it as a means to help other people?” asked Sebastian Stricker, a business innovation advisor to the WFP. “The idea of ShareTheMeal is simple and that’s exactly why it works. We can move fundraising into the 21st century. This is a tool to ‘crowdsolve’ global hunger.”

In early tests in Germany, Austria, and Switzerland (starting in July 2015), the WFP said that more than 120,000 people donated to provide more than 1.7 million daily rations to children in need.

It’s estimated that there are 60 million people worldwide who are either displaced or are deemed refugees and, over the past few months, the world has been paying much more attention. Companies like Google, Apple, and Facebook have stepped up to provide some form of assistance to refugees. Private individuals have started their own campaigns, answering the call from President Barack Obama to offer whatever assistance they can.

The ShareTheMeal app is available for both iOS and Android devices.