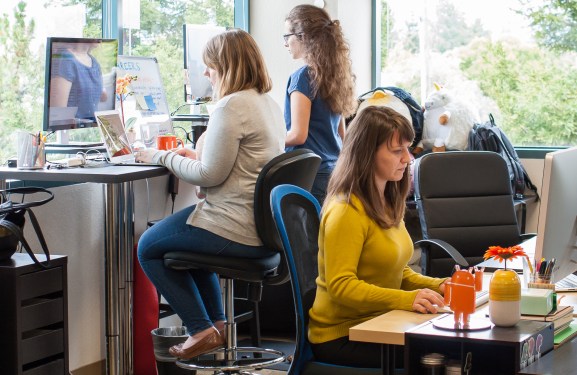 Online education startup Udacity, whose students have gone on to join the likes of Google and Facebook, is now a $1 billion company.

Today the education company shared that it talked its way into a $105 million investment from Google Ventures, Andreessen Horowitz, media company Bertelsmann, and others in order to expand internationally.

Udacity’s international plans aren’t exactly new — 30 percent of its users are based outside the U.S., the company told VentureBeat. “We are going to new markets … and there is no magic number … to where we go. We are going where there are a lot of people attracted to tech, but there is a lack of integration,” Udacity’s president and COO, Vish Makhijani, told VentureBeat.

Udacity said it’s not doing this on its own. Partnerships with global conglomerates, like Google and India’s Tata, have been key to the international mindset of the company. In India, for example, Tata advised Udacity on the local tech trends and adoption so the educational model could fit better that of the country. The localized technique, said the COO, also led Udacity to cut the class prices, as the $200-a-month per-class fee was not affordable after the dollar-to-rupee conversion rates.

The same thing happened in Egypt where, Makhijani said, companies helped them with the localization process. Udacity, with the help of Google, “worked with the Government of Egypt to localize [its] Android courses into Modern Standard Arabic.”

Makhijani said that the company is open to any other place that wants to adopt its educational model and that the service already has closed captions in over 50 languages. Yet there is no current plan to expand in other parts of Africa or in South America.

Udacity now offers nine online “nanodegrees” and plans to put together somewhere between 40 and 50 new degrees by the end of 2016, said Makhijani.

As for the U.S., Udacity’s effort to diversify white male-dominated engineering teams includes partnerships with AT&T to provide scholarships for students in inner cities, Accenture’s scholarships for veterans, and a 50 percent rebate off the tuition price after completion of a program.