Virtual reality pioneer CCP Games has raised $30 million to continue with VR game development. The funding shows the level of excitement, even for old game companies like CCP (the maker of Eve Online, one of the most popular massively multiplayer online role-playing games in the world), in augmented and virtual reality, which tech adviser Digi-Capital expects to be a $150 billion industry by 2020.

The Reykjavik, Iceland-based game publisher has been developing two VR games, Eve: Valkyrie and Gunjack, for upcoming VR headsets such as the Oculus Rift, which debuts next year from Facebook’s Oculus VR division. 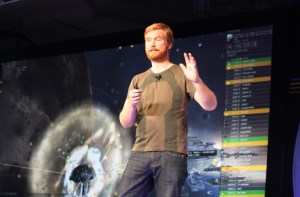 New Enterprise Associates led the investment, with participation from private equity firm Novator Partners. The amount of investment shows that VR gaming will be expensive, mainly because it will take a while for the experimenters to get it right. CCP Games jumped into VR early with Eve: Valkyrie. The Samsung Gear VR mobile headset will launch on November 20, but major PC-based and console-based systems aren’t arriving until next year.

Jason Rubin, the head of worldwide studios at Oculus VR, said at our recent GamesBeat 2015 conference that game developers have to dive in, experiment, and even fail a few times to have a shot at the financial “gold rush” that will happen if VR truly becomes a mass market.

The investment will be used to further position the company to drive innovation in VR as the technology begins to transform the entertainment industry.

Harry Weller, the general partner at NEA, has joined CCP’s board of directors. Andrew Schoen, also of NEA, will be joining as deputy director.

Eve Valkyrie is expected to launch with the Oculus Rift in the spring 2016 and on Sony’s PlayStation VR in the first half of 2016. Gunjack, which is being made at CCP’s Shanghai studio, is scheduled for release on Samsung’s Gear VR platform later this month.

“We believe VR will revolutionize not just video games, but the wider technology and media industry as a whole,” said Hilmar Veigar Pétursson, CEO of CCP, in a statement. “We were there at the beginning, and this investment will give us strength to maintain our leading development efforts.”

CCP Games was founded in 1997 in Reykjavik, Iceland. It launched Eve Online, a successful massively multiplayer online sci-fi game, in May 2003. CCP’s major shareholders include Novator, General Catalyst, and NEA.

“We’ve been admirers of CCP for quite some time,” said Weller in a statement. “Their legacy with EVE Online and early investments in VR have put them in a leadership position, and we want to partner with them to further build on the great platform they have already established.”