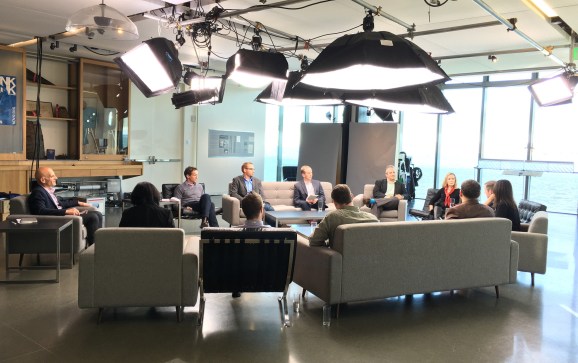 The Internet of Things might finally start going mainstream when detergent brands, for example, begin building sensors into their containers that can auto-order a new bottle when the supply runs low.

A group of CMOs, platform execs, pundits, and analysts discussed the issue at a roundtable organized by Adobe on Thursday in San Francisco. The twelve people around the table discussed the prospect of fifteen percent of all purchases being “passive” by 2020.

That is, many of the products we use may “know” when they are running out, and will make a network call to replace themselves. The consumer wouldn’t have to do anything beyond setting things up and can make changes via an app.

“If you’re Tide, you put a sensor in the bottle that says they’re using it at X rate,” said VMware mobile strategist Brian Katz. “If it works well, you’ll see that [consumers] will start to trust those brands more.”

Katz pointed out that the sensors won’t help in all situations. If a consumer suddenly wants to bake a chocolate cake, it won’t matter if the sensor in the egg container says they still have enough eggs for normal usage rates. They’ll need more eggs.

Amazon’s Dash Buttons may turn out to be a pioneer product in the consumer IoT space. These are physical buttons that can be hooked to a Wi-Fi network, placed near a product, then pushed to automatically reorder a product that has run out, like detergent.

But the buttons are a rather clunky experience, and they don’t offer a truly “passive” way to buy stuff, since the consumer still has to push a button. Still, some of the roundtable participants believe that the buttons may be a good way to introduce consumers to the concept of passive buying.

“The baseline has to be simple, and then I would have to opt in to the more elaborate experience,” said Banner Health CMO Alexandra Morehouse.

Others believe that brands should start from scratch. “A passive purchase is not pushing a button, in my mind,” said AnyPresence CMO Susan Miller. “It’s having that sensor in the bottle.”

Miller said brands shouldn’t think of passive buying as “just an iterative improvement” to what they already do, but rather think hard about the customer experience, and ask “what’s the ideal?”

Unfortunately, big brands are known for being slow to catch on to, and commit to, new ways of selling and distributing products. Most were late to the advent of the Web, and most were slow to embrace mobile.

Not that it’s easy to make major strategic shifts.

“The far future is easy, but the near future is very difficult because you don’t know if the next big thing is going to be real,” said Colin Raney, CMO of Formlabs.  “You have to have a lot of vision and commitment and you have to follow through on that commitment.”

If passive buying catches on, and it very likely will for some products, brands will have to determine their role in the distribution process. Will they simply create the products and leave the distribution to big technology platforms like Amazon? Who will hold the power in the relationship — the brand or the distributor?

Some in the room said they’d put their money on the platforms.

“It is more likely that those aggregators will be the ones to win, because they are not thinking of just one dynamic,” said AnyPresence’s Miller. She explained that they are looking at change across verticals; they aren’t looking a single product, but rather at people’s lifestyles.

Miller said that the large platforms will own all the marketing and usage data from IoT transactions, and will be all the more powerful because of it. The brands, on the other hand, will control only their own customers’ data.

Formlabs’ Raney believes that brands will be forced to become far more specialized in terms of what they sell, when passive buying becomes commonplace.

“I think we’re going to see brands get blown into a thousand different pieces,” Raney predicted.