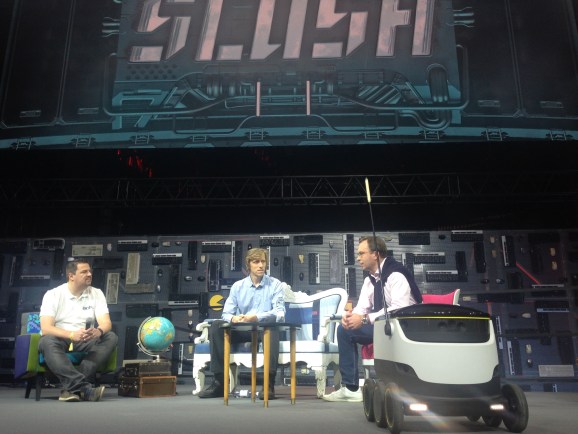 HELSINKI, Finland — Just a week after Starship Technologies announced it was developing a fleet of delivery robots, the company demonstrated one on stage today for the first time.

Starship, an Estonia-based company created by two Skype cofounders, says these fleets of pint-sized lunar rover-type robots will dramatically reinvent the $4 billion delivery service. Rather than embracing the dream of drones flying through the air to deliver toilet paper, Starship argues that a land-based robot is safer, cheaper and more practical.

“Robotics have a huge potential to change the world and improve people’s lives,” said cofounder Ahti Heinla, in an interview on stage at Slush 2015. “We’ve always been attracted to big problems. and delivery is still a big problem, probably a bigger problem than helping people communicate over along distances.”

The company has already been testing the robots in five markets: San Francisco, London, New York, Dublin, and Boston. They estimate that more than 10,000 people have likely seen the robots in the wild, and claim the robots provoke little reaction.

“[People] don’t react to the robot much at all, which is important because it shows they’re accepting the robot as a part of their daily lives,” Heinla said.

(Side note: I have a terribly hard time believing that the site of a six-wheeled robot rolling down the sidewalk draws few stares or remarks from people who see it.)

The cofounders also claim that they’ve seen no anti-social behavior toward the robots, no attempts to kick, push, or knock them around. And they said breaking into the robots’ compartment is as difficult as breaking into a car.

The Starship robots will deliver groceries and small packages (up to 40 pounds) to locations in suburban neighborhoods.

The company is building a series of hubs where the robots will be housed. People who are scheduled to receive a delivery will be able to indicate when they are available via an app on their smartphone.

The robot is autonomous, and will make its way to the customer’s home or office on its own. Once the cargo is delivered, it will return to the hub.

The company plans to launch its first official pilot in the London area in either late Q1 or early Q2, 2016. It hopes to launch a U.S. pilot in the second half of 2016. The goal is a full consumer launch in 2017.