First launched for Android earlier this year, Yallo is a slick call-recording app for both inbound and outbound calls that works with your existing mobile telephone number. And today it launches for iPhone too.

Alongside the new app launch, Yallo has also announced a fresh $2.5 million funding round led by German telecom giant Deutsche Telekom, which invested $2 million through its T-Ventures investment arm, with the remaining $500,000 coming from Carmel Ventures. This is in addition to the $4 million Yallo raised from Carmel Ventures back in March.

If you’ve ever sought an easy-to-use solution to record calls on your mobile, there is a good chance you’ve been disappointed. Apps that promise the world are often tediously difficult to use or simply don’t work. Often both. There are some promising ones out there, such as TeleStar’s Call Recorder which only records incoming calls, and TapeACall Pro which costs $10 to download and only works with carriers that support 3-way (conference) calling. But Yallo wants to remove the “ifs” and the “buts” from the process — it promises a call-recording app that just works.

Setting up is easy, but you do need to divulge your phone number — if you prefer not to give out your personal number to a third party, then this won’t be for you.

Though Yallo is pitched primarily as a call-recorder, it’s much more than that. You can use the app without recording calls, as it also serves as an alternative VoIP dialer that uses Wi-Fi to make and receive phone calls with your own telephone number. So this is also useful if you’re abroad or in an area with patchy cellular coverage.

It’s also worth noting here that Yallo-to-Yallo calls are completely free at all times for the existing feature set, though there may be charges in the future for add-on services. To call normal (e.g. mobile or landline) phone numbers, you will require credit, pricing of which varies from country to country but generally hovers around the 1 cent-per-minute mark. And it’s completely free to receive incoming calls.

If you want to record an outbound call, you must switch on “Recording” in the Settings. Then, you don’t really have to do anything else. 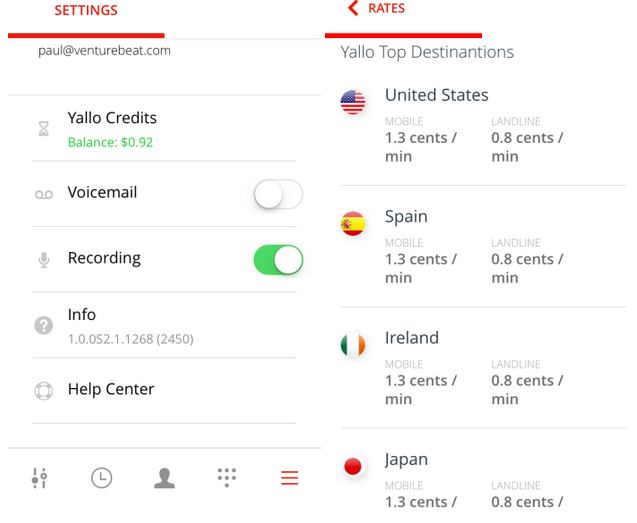 You’re given $1 credit to begin with so you can test the features out. Simply call a number, and it will start recording. Once it’s finished, you can give the call a name (e.g. “Interview”) and play it back there and then. 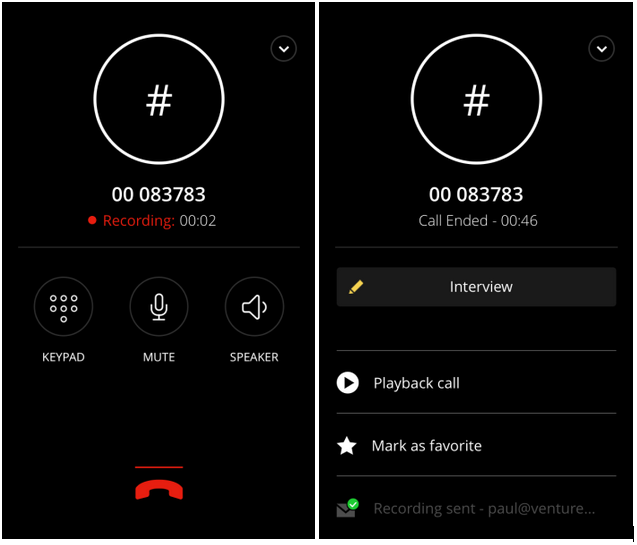 Yallo also saves the call to the cloud, and emails a copy of the conversation to you as soon as the call has ended. This may not be entirely to everyone’s liking, though. For super-sensitive calls, it would be nice to have an option to only save files to the device, but the company said that it omitted this option to ensure users didn’t run out of local storage and also to help conserve battery. That’s not to say that future versions couldn’t include such a feature.

For incoming calls, the recording process is slightly different. Yallo can only intercept an inbound call if you specifically choose to divert calls to Yallo in the settings. So if you’re never sure which calls you may wish to record, you’ll want to have this option permanently on. It’s easy to switch on and off.

In my tests, the recordings were perfect and the app was easy to use. I encountered a compatibility issue with dual-SIM mode on Android, but that will likely affect few people who use the app.

Yallo is also set up well for sharing recordings, which may appeal to businesses. And there are some interesting features on the horizon, too. The company already has a working transcription feature internally, a tool that it’s currently tweaking before launching to the public. So effectively, you could have a fully written version of your conversation in your inbox shortly after the call ends. It has not yet been decided what this feature will cost, if anything.

There are some potential legal issues related to recording calls, but Yallo has considered this. So if you are in a country or state that requires all parties to know that a call is being recorded, Yallo issues an audio alert automatically notifying everyone.

The extra $2.5 million Yallo has in its coffers will no doubt come in handy, but Deutsche Telekom’s involvement is notable. Indeed, the telecom company is viewing this investment strategically, as it could complement its own offerings in the future.

“We are excited to have Deutsche Telekom join our journey,” said Tal Elyashiv, CEO of Yallo. “This is a clear vote of confidence in our technology and in our ability to revolutionize the voice calling experience. Deutsche Telekom is a global leader and pioneer, and has brought multiple innovative solutions to its customers. We believe that with their support we will be able to help an even wider community of users benefit from radically richer voice communication experiences.”

You can download Yallo for iPhone and Android today.