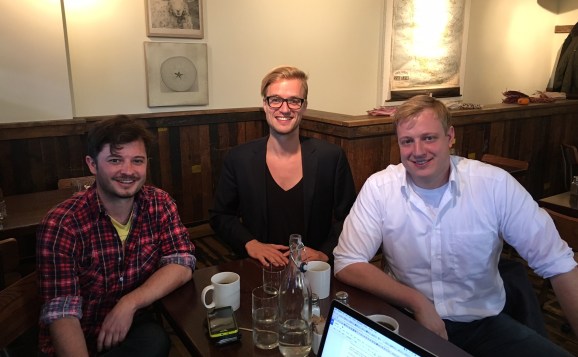 As the largest developer of ad blockers, Eyeo, with its popular Adblock Plus, has found itself at the center of a fierce debate about ethics and, potentially, the legality of blocking mobile browser ads.

The subject has been a popular one in Europe for some time, but it caught fire in the U.S. in June when Apple announced that its iOS 9 mobile operating system would enable (and some say welcome) mobile ad-blocker apps on iPhones. (A new Adblock Plus iOS app for iOS 9 was approved by Apple in September.)

Apple opened the door to ad blockers because it wants to improve the browser experience on its iPhones. And many, many mobile consumers do want to block the ads. There are now 198 million active users of ad blockers around the world, and ad blocking grew by 41 percent globally in the last 12 months, according to a study by PageFair.

But publishers may suffer, or even die, if one of their biggest revenue sources — mobile ads — is suddenly choked off. The PageFair study said ad blocking will cost publishers nearly $22 billion in lost ad revenue during 2015.

Many in the advertising world see Apple’s enablement of ad blockers as an irresponsible bite to the hand that pays for the Internet.

The Interactive Advertising Bureau‘s CEO Randall Rothenberg had this to say about ad blocker apps:

The war, it seemed, was on. 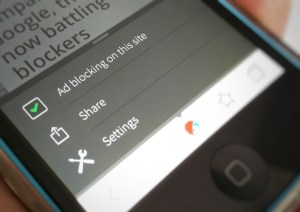 Above: Adblock Plus – iOS

Rothenburg used the “extortionist” word in reference to the fact that advertisers can pay Eyeo/Adblock Plus to “whitelist” or permit their ads to pass the ad blocker. Google, for one, pays the fee. Amazon, for another.

Many advertisers refuse to pay. Why, they ask, should a small company like Eyeo be the arbiter of what sorts of mobile browser ads pass muster and which are considered disruptive?

The short answer: Adblock Plus is the most widely used mobile ad blocker. The app’s developer, Eyeo, says Adblock Plus has been downloaded 400 million times, has 60 million active users, and is averaging about 3 million downloads per week.

Still, Adblock Plus was in New York City last week — the week of the Ad:tech conference — waving the olive branch to the advertising world.

The company invited advertisers, publishers, brands, and consumer groups to a meeting it dubbed “Camp David,” with the intention of creating a board that would, in a democratic and inclusive way, create a new set of standards for acceptable mobile ads.

I met three of Eyeo’s principals at a restaurant near the Ad:tech conference to talk about the results of Camp David.

Eyeo communications manager Ben Williams was upbeat, saying that his company was pleased with the 20 or so people who showed up for the meeting, and with the dialogue that resulted. His team, he said, heard lots of good feedback about how to set up and operate the standards board.

But many of the players that would need to be involved in such a discussion did not attend the meeting.

The IAB was invited but did not attend. Asked why he didn’t attend Eyeo’s meeting, IAB COO Patrick Dolan told VentureBeat, “We don’t agree with their business model.”

Nor did the advertising conglomerates Omnicom and Publicis attend. One Omnicom executive I talked to, however, said he would have attended — if he’d been invited.

Jason Kint, CEO of online publishers trade group Digital Content Next, was invited, and explained his decision not to attend in a blog post. Here’s the meat of it:

As much as your independent board is empowered to align better principles with what ultimately will drive consumer value long-term, I’m highly supportive. However, I’m still troubled by the existence of models where your company profits from allowing ads to be served. I must send my regrets and pass on the invitation.

“Everybody now is looking for a solution,” Eyeo’s Williams said. The real question many in the ad industry are asking is why Eyeo is the right player to organize the standards board.

The IAB’s Dolan was quick to mention that his organization has been very involved in the establishment of all kinds of ad standards, and should be the body that establishes mobile browser ad standards.

I personally attended several sessions at Ad:tech that discussed ad blocking. It is a hot topic among advertisers now. But not once did I hear the Adblock Plus or Eyeo names mentioned in the discussions. The advertising people I spoke with know what Adblock Pro is, but did not seem to take very seriously the group’s plan for creating an industry-inclusive standards board.

Williams pointed out that Eyeo has gained a lot of experience with mobile browser ads and is well positioned to recognize whether an ad is “disruptive” or not. He said his company has conducted user surveys and conducted eye-tracking studies to understand user sensitivities to various types of ads and ad formats.

“With that data we can decide what is acceptable or not,” Williams said.

Eyeo’s high-level position on the evolution of mobile ads is that advertisers have focused too much on getting lots of impressions on mobile devices and too little on the user experience.

“Advertisers have used a short-term approach that has alienated users,” Williams said.

So people began to block them — first on the desktop, and now on mobile.

“There has been shockingly little innovation since 1995; there is still lots of dependence on banner ads,” Faida said. He stated that the only way users will accept ads is if they become more interesting and relevant. “That’s why they (web users) opt out; they need to be addressed in a more innovative way,” he said. 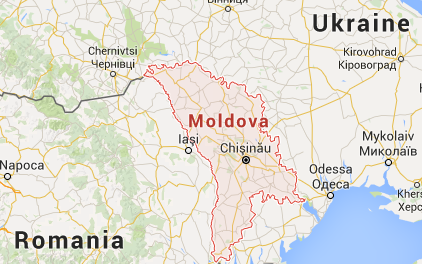 “No one wanted the landscape that we were kind of left with,” Williams said. “We didn’t see anybody doing anything, so we thought ‘how can we do something positive?'”

Eyeo sees the issue from the user perspective. Its primary goal is to rid users of annoying or distracting ad experiences. Adblock Plus was originally developed by a programmer from Moldova named Wladimir Palant in the mid-2000s. Shortly after Palant quit his day job to work on the product full time, the Acceptable Ads program came into being as a way to support the project.

A secondary goal emerged — to find a (profitable) way to get offending advertisers and their ads back onto the screens of mobile devices.

“The bad user experiences in advertising have created this problem,” Faida said. “We want to establish a second chance to get those users back.”

That second chance, Faida said, is Eyeo’s Acceptable Ads program, and the reason the company has come under such scrutiny from the advertising community.

In the program, large publishers and ad networks (like Google) pay a certain amount to be put on a whitelist of advertisers whose ads are not blocked by Adblock Pro. And they agree to make sure their ads comply with a set of user experience criterion developed by Eyeo.

From the user’s point of view, ads from whitelisted advertisers make it through the ad blocker by default, but the user can make a tweak to the settings so that all ads are blocked.

Williams said that Eyeo continues to review the ads coming from publishers or ad networks to make sure they are the right size and not too disruptive.

“They bring their ad to us and we run it through a technical process, a series of tests,” Williams explained. “The ad is put on the whitelist only after we agree that they fit the criteria.”

“It’s a manual process,” Williams said. “Doing it manually is the only way of doing it, and manual is better.”

“We have to think of our user experience,” Faida added. “If we start letting in ads that don’t fit the criteria, our users will think our ad blocker is broken.”

The amount paid to Eyeo by large advertisers in the Acceptable Ads program depends on the amount of revenue the advertiser captures as a result of not having its ads blocked by Adblock Pro.

“Every partner that works with us benefits by being able to reach a much larger audience,” Faida said.

However, Faida pointed out that 90 percent of the 700 advertisers Eyeo works with — the smaller ones — get all the services offered in the program for free.

“We have everything from Russian kiddie blogs to large search engines,” Williams said. “The majority of the large partners are in the U.S.”

Many in the advertising industry have called the Acceptable Ads program “extortion,” or some variant of that. The implication is that because there is money changing hands, Eyeo may not be discriminating between “good” ads and “bad” ads in a fair and unbiased way. Because Google and other big advertisers are paying Eyeo, the thinking goes, they may be able to exert undue influence over the definition of an acceptable ad.

This may be the real reason Eyeo wants to get many other industry players involved in the creation of mobile ad standards — to create the appearance of objectivity.

On the other hand, advertisers might be using the fact that Eyeo gets paid as a way to quickly dismiss the company’s, and its whitelist’s, legitimacy.

Williams said he’s heard the extortion argument too many times, and insists it’s a wrong-headed view of what Eyeo is really about.

“It’s an incorrect way of looking at it. If you look at the history, Adblock started as one guy’s hobby, and grew because of a need to make the browsing experience better,” he said.

“I admit that the process developed imperfectly,” Williams said, “but the idea of whitelisting is making the browsing experience better.”

The real question now is whether or not publishers, especially small ones, can find ways of dealing with the increasing popularity of mobile ad blockers. Some might engage more with platforms like Facebook or Twitter as a way to get their ads out. Others might deliver marketing messages only through their own apps. After all, studies show that the vast majority of mobile users’ time is spent in apps, not in a browser, and so far no ad blocking product has shown up to block in-app ads.

Still, many publishers are likely to be harmed. Accordingly, the IAB is not ruling out taking legal action against players like Adblock Plus.

“Yes, we’re looking at it,” said the IAB’s Dolan. “Why wouldn’t we look at that option?”