Facebook has activated its Safety Check feature, following the horrific attacks in Paris, France. With it, users can let their friends and family know immediately that they’re safe.

Unveiled as a response to the 2011 earthquake and tsunami in Japan, this Safety Check feature will let people not only notify their loved ones that they’re unharmed, but also check in on others in the affected area and mark their friends as safe. Previously, it was activated for natural disasters like the Nepal and Chile earthquakes. This is the first time it has been used for a non-natural disaster event.

Update at 4:22 p.m. Pacific on Saturday, November 14: In the 24 hours since the attacks, 4.1 million people marked themselves as safe using the social network’s Safety Check feature, Facebook told VentureBeat in an email. In doing so, 360 million people were notified that their loved ones were safe. Additionally, the company said that 78 million people had 183 million interactions on Facebook related to the tragedy in Paris.

Head to the Facebook Safety Check page and, if you’re in the affected area, you can click on this link to let others know that you’re safe.

This is what the notifications look like for others: 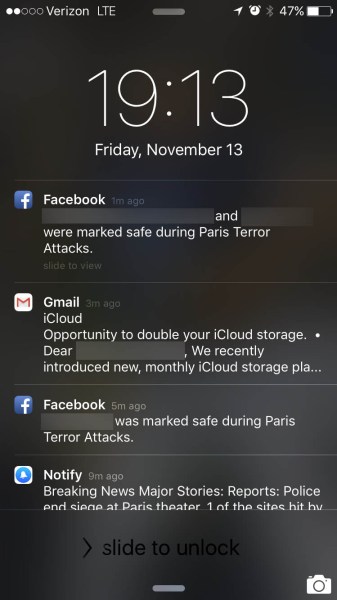 A Facebook spokesperson told VentureBeat: “We are shocked and saddened by the events unfolding in Paris. Communication is critical in these moments both for people there and for their friends and families anxious for news. People turn to Facebook to check on loved ones and get updates, which is why we created Safety Check and why we have activated it today for people in Paris.”

As this is the first time Facebook has activated this feature for a non-natural disaster event, the company was criticized for not having done so for similar incidents, like the one in Beirut. In a Facebook post, Alex Schultz, the company’s vice president of growth, wrote:

We chose to activate Safety Check in Paris because we observed a lot of activity on Facebook as the events were unfolding. In the middle of a complex, uncertain situation affecting many people, Facebook became a place where people were sharing information and looking to understand the condition of their loved ones. We talked with our employees on the ground, who felt that there was still a need that we could fill. So we made the decision to try something we’ve never done before: activating Safety Check for something other than a natural disaster. There has to be a first time for trying something new, even in complex and sensitive times, and for us that was Paris.

Facebook will be changing its policy around Safety Check following this week’s events. Schultz explained that he wanted this tool to “be available whenever and wherever it can help. We will learn a lot from feedback on this launch, and we will continue to explore how we can help people show support for the things they care about through their Facebook profiles.”

If you’re in Paris, please stay safe. If you find yourself stranded, Airbnb hosts have also banded together to open their doors to take people in — just tweet using the hashtag #PorteOuverte, or “open door.”