(By Liana B. Baker and Suzanne Barlyn, Reuters) – Top daily fantasy sports companies DraftKings and FanDuel filed lawsuits on Friday to contest an order to shut down their online gaming operations in New York state, asking a state court to rule that the games are not illegal gambling.

The New York attorney general’s office on Tuesday ordered the two companies to stop taking money from New Yorkers and declared the games to be against state law because customers “are clearly placing bets on events outside of their control or influence, specifically on the real-game performance of professional athletes.”

DraftKings said in its lawsuit that New York Attorney General Eric Schneiderman was “using strong-arm tactics and defying the rule of law,” accusing him of acting as judge, jury and executioner of the companies.

Being forced to shut down in the state could be a crippling blow for the fast-growing, multibillion-dollar industry, as New York has more daily fantasy sports players than any other U.S. state, according to Eilers Research.

DraftKings accused Schneiderman of abusing his authority by threatening to take action against the company’s payment processors, Vantiv Inc and PayPal Holdings Inc, if they did not stop working with DraftKings.

New York’s Constitution prohibits gambling though the state has carved out a handful of exceptions, including horse racing and the state lottery. But each of those changes required amending the state’s Constitution, a years-long process that requires approval of legislation by two successive legislatures, followed by a public vote, he said. 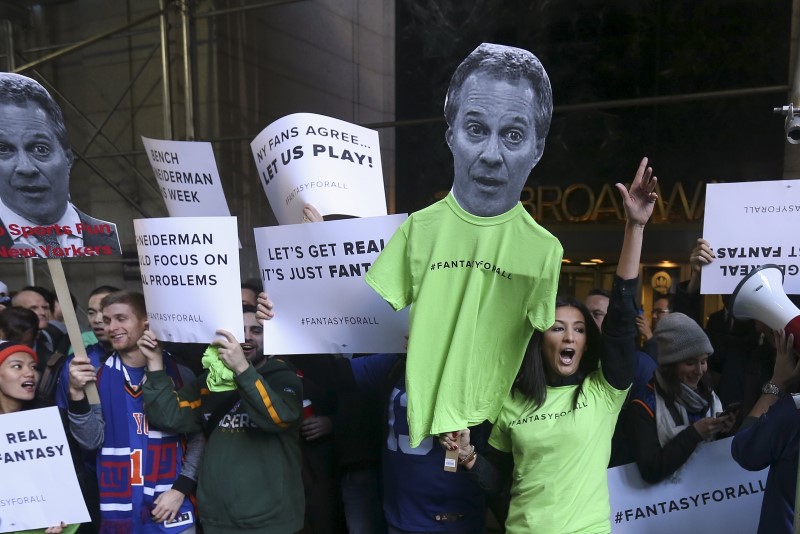 Earlier in the day, around a hundred protesters – a significant number of whom work for daily fantasy sports sites – gathered outside Schneiderman’s office to protest his decision.

Jason Green, 35, visiting from Nashville for a daily fantasy sports conference being held this weekend, came to the protest after reading the cease and desist letters to the companies from Schneiderman’s office.

“Regulation is one thing, but this isn’t regulation – just one guy making a decision,” he said. “There’s a lot of misinformation out there and hopefully we’ve shown that people should be allowed to keep playing.”

Green works at a video game company and enters up to twenty hockey lineups per night, spending a few hundred dollars a week on the games.

Modern fantasy sports started in 1980 and have mushroomed online with participants typically creating teams that span an entire season in major professional sports, including American football, baseball, basketball and hockey.

Daily fantasy sports, a turbocharged version of the season-long game, has developed over the past decade. In these, players draft teams in games played in just one evening or over the course of a weekend.

The companies may have painted targets on their backs through aggressive advertising at the start of the National Football League season that promised large winnings to participants. FanDuel has said it planned to pay out $2 billion in cash prizes this year.

“They got very big, very fast,” Schneiderman said on Thursday at an event, saying New York won’t be the first or last state to make daily fantasy sports illegal. “New York state regulators and regulators in a lot of other states weren’t paying attention.”

The companies have been at the center of controversy since early October when a DraftKings employee won $350,000 from a $25 entry in an American football contest on the rival FanDuel site.

The two companies then banned their employees from playing, but local and federal authorities began to investigate whether the fantasy sites offered games of chance, which were essentially gambling.

As the companies grew, they raised hundreds of millions of dollars, giving both DraftKings and FanDuel valuations of more than $1 billion. Investors in the companies include Fox Sports, Major League Baseball, the National Hockey League, KKR & Co LP, Raine Group, Google Capital and the venture arms of Time Warner Inc and Comcast Corp.

Daily fantasy players are not the only ones fretting about the possible loss of the games. A cottage industry of blogs, magazines and apps that provide advice and information to fantasy players has sprung up and the revenue lost from daily fantasy sports sites could hurt their bottom line.

RotoGrinders.com, for instance, is a popular blog offering tips by “grinders,” or professional daily fantasy sports players who spend thousands per day on games. RotoGrinders also has a daily satellite radio show on SiriusXM.

Fantasy advice is often the lead story on ESPN.com, and Matthew Berry, the company’s senior fantasy analyst, is a paid spokesman for DraftKings. NBC Universal also saw success with their own news website for fantasy sports, Rotoworld.