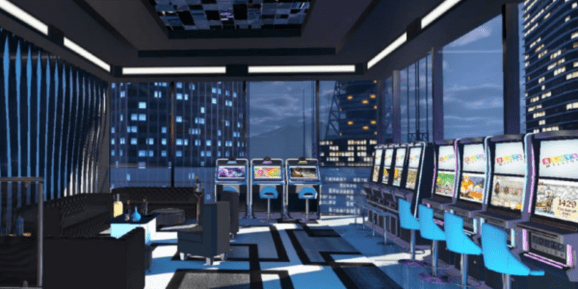 Virtual reality is a new medium, which is why it inspires as much mistrust as it does awe. Some view it as the stuff of dystopian science-fiction, and the idea of adding gambling into the mix will horrify politicians and anti-gambling pressure groups alike.

It’s clear that a future virtual reality online casino industry, if such a thing develops, will face many regulatory hurdles.

Some gambling jurisdictions are likely to prohibit it completely, while others may impose restrictive regulations, which could stymie the development of a market and limit the customer reach.

And yet, for all its creative potential, the use of virtual reality for online gambling is perhaps as inevitable and unstoppable as its user for the consumption of pornography.

In fact, VR casino gambling is already here and ready to launch.

Despite the fact that the Oculus Rift headset is unlikely to become commercially available at least until Q1 of 2016, online gambling company SlotsMillion has spent the past seven months rendering its online casino experience in VR.

The result is a casino lobby in the clouds, on the 80th floor of a skyscraper in a futuristic, Blade Runner-esque cityscape. Here, you can prop up the bar, choose to play any number of immersive 3D slots games, interact with other players, and experience very real vertigo when you lean against the windows and look down.

While building our online casino, SlotsMillion worked closely with its own regulator, the licensing jurisdiction of Malta, as it sought to develop a new set of best practices for a completely new medium.

Interestingly, Malta insisted that, unlike most land-based casinos around the world, clocks should be visible on the walls, so that players cannot ‘lose’ themselves in the games. It also imposed restrictions on a multi-player tournament games feature SlotsMillion wanted to develop, in which a player’s cash balance were visible. The regulators ruled that a customer’s wins and losses should remain private.

The online casino industry is facing greater regulatory controls than ever before, as more and more countries around the world opt to license and tax online gaming, and the watchword for operators is compliance.

But, of course, a large unlicensed ‘offshore market’ exists, unbound by the rules of governments. Thus, just as in the real world, we have the intriguing prospect of the emergence of both safe, licensed VR casinos — and edgier, illegal VR gambling dens, where anything goes.

Changing face of the gambling industry

But while the augmented reality on show at SlotsMillion is undeniably impressive, here is a product with, as yet, no market and no customer-base.

Is this, then, a mere gimmick or a real glimpse of the way gamblers will interact with casino operators in the future? And when a customer-base develops, what will it look like? How big will it be?

When it comes to market, the Oculus Rift will retail at upwards of $350. All very affordable, but the goggles will not work without a serious gaming PC, pushing the costs up to a good $1,500.

Thus, the first users of virtual reality casinos will likely be gamers of the millennial generation, and not the casual or traditional gambler. SlotsMillion itself has said that the vast majority of customers will experience the project via the no-goggles-required, in browser 3D version, rather than the Oculus Rift.

The casino giants of Nevada have long lamented the millennials’ reluctance to embrace traditional casino games. Reared on console gaming, they naturally get their buzz from Halo 5 rather than staring hypnotically at spinning reels.

Meanwhile, the unstoppable rise of esports has not gone unnoticed by a casino industry that is becoming increasingly desperate to appeal to a younger generation.

Both Nevada and New Jersey amended their gaming laws this year to permit “variable payouts” on their gaming machines, in order to pave the way for the presence of slots that incorporate some form of video skill-gaming.

For example, gaming law usually dictates that payout odds must be the same for all players, but variable payouts will allow better odds for players who are able to gain proficiency at a skill-based bonus game.

The lines between video gaming, esports, and gambling are already becoming blurred. And the advent of virtual reality will increase the need for further crossover.

Social casinos are likely to be a big hit in virtual reality. The industry is currently worth some $3.4 billion, according to Eilers Research. A figure that is set to become $4.4 billion by 2017, as this industry, too, seeks to expand its demographic through the introduction of more skill-based elements.

Social casinos can be used effectively by land-based casinos as a marketing tool, and virtual reality recreations of big Vegas casino resorts are likely future projects. MGM Resorts has already done this in 3D with its MyVegas social casino, which allows players to explore MGM properties on the Las Vegas strip.

Adam Krejcik, analyst at Eilers Research, recently told Venture Beat that he believes social games may be the first genre to monetize the Oculus Rift.

Again, although there is undoubtedly some crossover, social casino customers are not the same as traditional online casino customers. They think like gamers, not gamblers, and their concerns are to beat the game rather than experience the thrill of risk-taking.

Thus, the virtual online casinos of the future are likely to be hybrid hodge-podge of skill games, video games, social games, and traditional casino games — geared towards the millennial generation.

Sarah Blackburn is the founder of GameOn Marketing and has worked in online gaming for the last 10 years.