Some of these expressions aren’t huge, but they’re still notable, because the Francophilia hasn’t spread across the board. Twitter, which is typically a place where people break news and discuss it, right alongside Facebook, hasn’t done anything visibly pro-France. Neither has LinkedIn or Apple.

Airbnb has activated its disaster relief program, enabling people displaced in Paris to stay with certain Airbnb hosts free of charge. The program covers reservations for those who check in between November 13 and November 17. Earlier, the company sent an email to hosts offering to reimburse them if they allow guests in France to extend their stay for free. 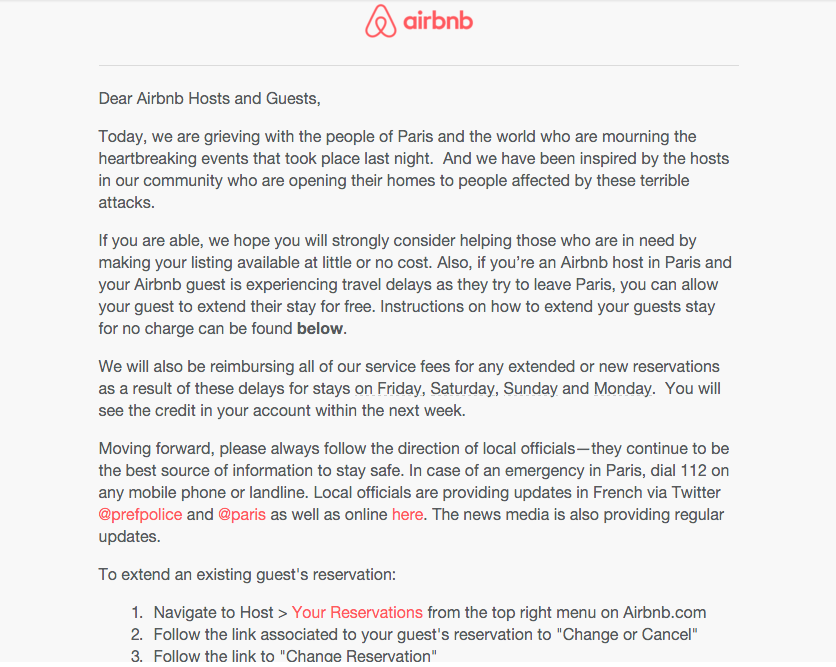 Above: Airbnb’s email to hosts.

Amazon is now displaying a big banner with the French flag at the top of its homepage, with the caption “Solidarité” (translation: solidarity). 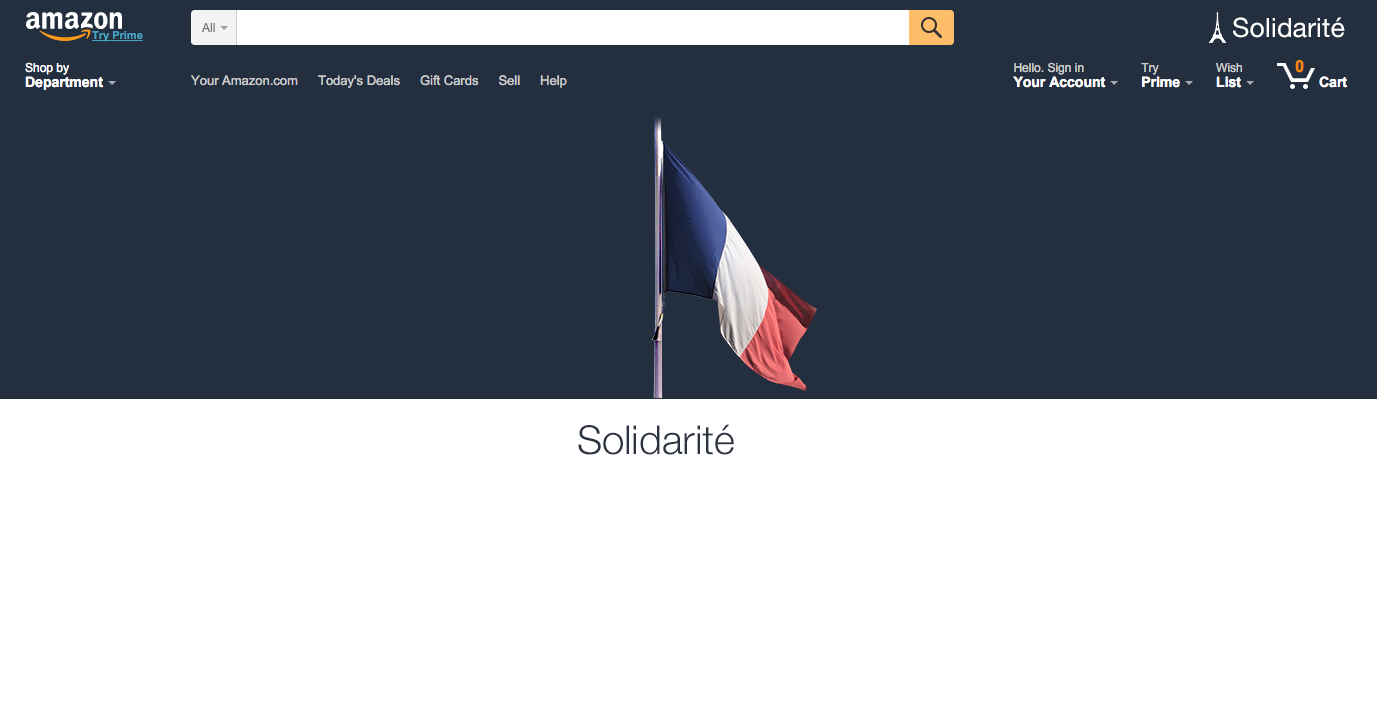 Above: Amazon’s homepage banner this morning.

Facebook has rolled out a profile picture filter with the French tricolor flag.

And last night Facebook turned on its Safety Check feature to allow users in France to indicate if they’re safe.

Google is allowing people to make calls to people in France using Hangouts for free. The announcement came last night in a Google+ post. And the YouTube homepage now features a logo at the top left featuring the French flag, and a “We stand with Paris” banner is placed prominently in the center of the page, where some videos would normally be shown. A “Latest news” link brings users to the France 24 English YouTube channel. 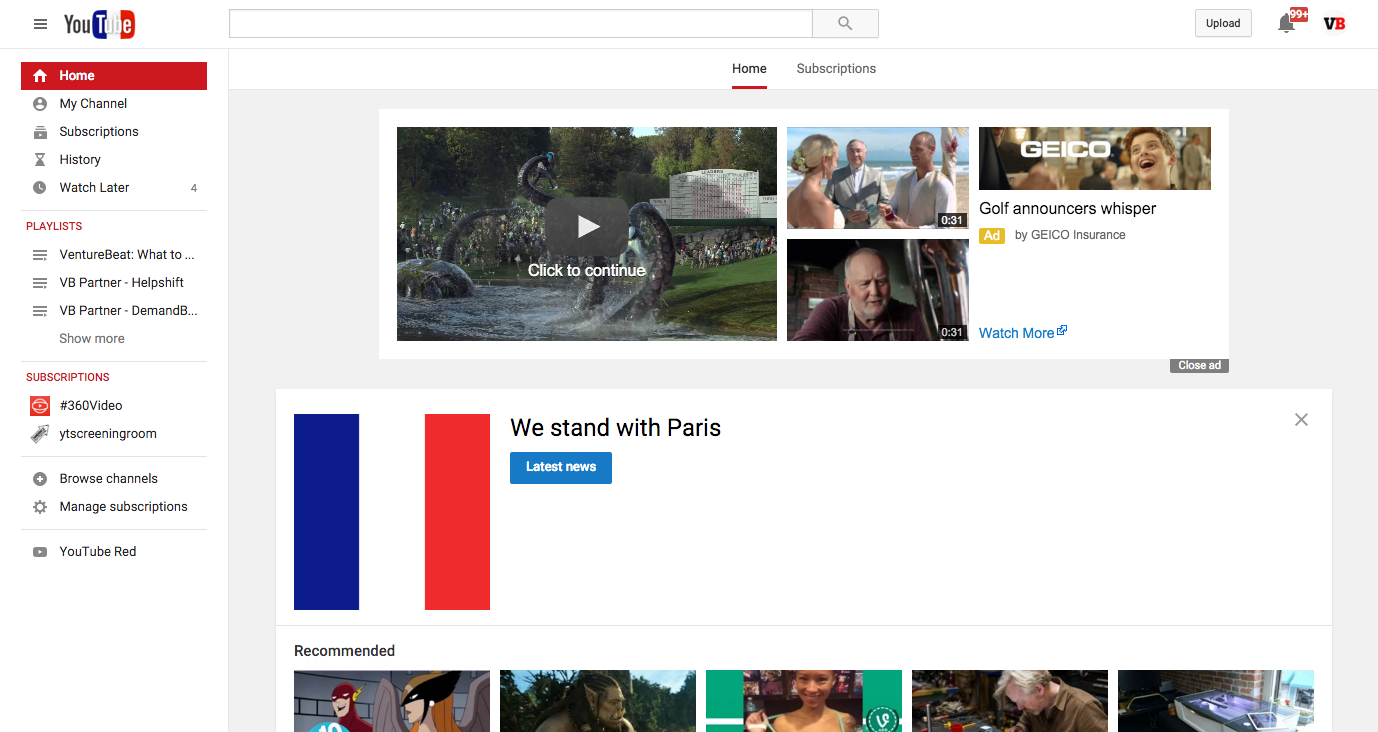 Microsoft is allowing people to make free domestic and international Skype calls to landlines and mobile phones in France for the next few days, according to a blog post.

Reddit has given its mascot at the top right corner of its homepage a French flag to hold. And the mascot is no longer smiling as it usually does.

Salesforce cofounder and chief executive Marc Benioff tweeted out an image that indicates the company’s support of France.

Sprint is offering free calling, roaming, and texting to France for all Boost Mobile, Sprint, and Virgin Mobile customers, according to a statement. The offer does not have an expiration date.

T-Mobile is offering free calls and text messaging between France and the U.S. through Sunday, according to a statement.

Verizon is allowing customers in the U.S. to make calls and send text messages to people in France free of charge this weekend, according to a statement.

We’ll update this post as we come across more pro-France declarations from tech companies.