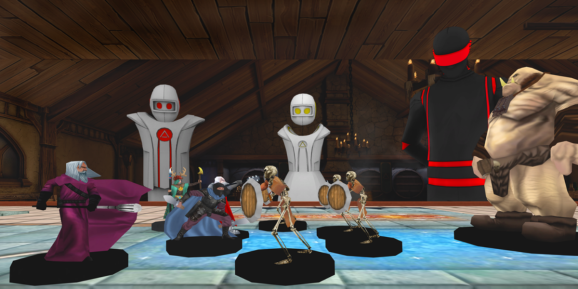 Now, dungeon masters won’t have to clean their house or purchase snacks for their friends in order to run a game of Dungeons & Dragons.

That is, as long as everyone in the group has a virtual reality headset.

AltspaceVR is a free social service that supports the Oculus Rift, HTC Vive, Perception Neuron, Leap Motion, and Microsoft Kinect. Think of the service like a virtual-reality hybrid of Skype and IRC in that people can create rooms and invite friends to private sessions. When in a room, users can hold a conversation, watch videos, and run presentations in a low-fi, yet technologically practical, virtual-reality environment.

This makes AltspaceVR perfect for activities involving groups that might not be able to meet in the same place in the real world. Like, say, a crew playing through a Dungeons & Dragons campaign.

Eric Romo, CEO of AltspaceVR, explains, “D&D is extremely social, which is why we are so excited to offer it in AltspaceVR. Players love it! We’ve seen them hang out together for sessions lasting six hours — previously only developers spent that long in VR.”

As of today, AltspaceVR users will have access to official Dungeons & Dragons game items in order to run a session. These will include character sheets, monster figures, and environmental tiles to help build out the adventure.