Guitar Hero Live became my surprise hit of the year (you can read about why in our review). It drastically changed the way I played music games, turning me from someone who had to get five stars on every song in the game to someone who was cool with just relaxing for a couple of hours and playing whatever song I wanted.

This is such a boon for music games that I think anyone with even a passing interest in music games should play it. So I was naturlally curious about the iOS version. Divorcing a game like Guitar Hero Live from the need to own a dedicated console makes a lot of sense on paper, but I had a few doubts: Would you be able to play all of the same songs from GHTV on your phone? Would the guitar that came with the phone version of the game be different? How would it look on a TV? I had to know.

To answer those questions: Mostly, no, and fine.

But a bigger question stands: who should buy Guitar Hero Live for their iPhone or iPad, since it’s also available on PlayStation 4, Xbox One, PlayStation 3, and Xbox 360? The answer varies depending on your situation, but thanks to a number of issues that plague the mobile version of the game, it’s mostly like going to be “not you.”

No console? No problem

Guitar Hero Live on iOS means not having to boot up a console if you want to play Guitar Hero. All you need is an iPhone or iPad, the proper AV/HDMI adapter, and a TV. This may not be the best thing to get excited about, but it ties into the game’s aesthetic and mood, in a way; the new Guitar Hero wants to be more approachable and fluid, and if you’re willing to keep a plastic guitar in you car, you can pull out the entire setup at a party the second you’re done explaining to someone why you’re so interested in “that new Guitar Hero.”

The mobile version plays the same as the others, and when it works, it’s just as fun. It feels strange, not having to power on something else in order to get a game like this to work, but it feels natural. It gives people without consoles or a PC a way to play a big-budget game, which is rarer than it should be. 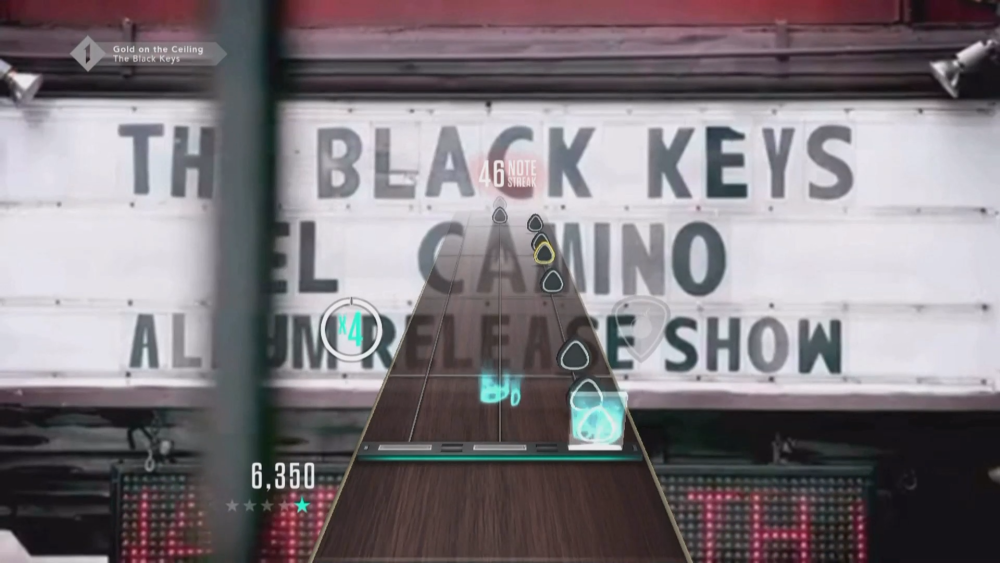 Above: When hooked up to a TV, the game looks exactly as it does on consoles, except on a lower resolution.

GHTV on the go

Guitar Hero TV, the 24-hour streaming service with hundreds of songs to play, made Guitar Hero Live, and it also makes the iOS version. Not only can you set it up anywhere, but you can also play without the included guitar. It changes interface if you don’t use one, swapping the directional single-color notes for black and white ones (which normally serve as the one for bar chords), turning the whole experience into a more traditional rhythm game, where you simply tap notes as they come down the fretboard.

It still hooks into the same stream as the other versions of Guitar Hero Live, and pulling out your phone to whatever happens to be playing on GHTV while you’re in line or waiting on friends feels cooler than it has any right to.

You’re paying the same for a lesser game

It might play like the console versions, but that doesn’t mean this version of Guitar Hero Livemirrors its console counterparts perfectly. For starters, GHTV has fewer features here than on any other platform. You have access to the service’s two channels but nothing else: no option to earn and use tokens to play specific songs, no Premium channel to play songs before they hit the regular channels, and no live leaderboard to encourage you to do better.

These minor things add up to a huge letdown. I didn’t think their absence would impact how I felt about the game, but without them GHTV feels less substantial; playing these two streams by themselves feels lonesome.

The video quality tends to oscillate between “fine,” “You Tube,” and even though you really only see the video feed out of the corner of your eye, you’ll still notice that it doesn’t look quite right. I also couldn’t find a comfortable spot to manually sync my game and TV, and the “game calibration” didn’t seem to work for me. It played fine, but it looked like I was hitting every note a smidgen later than I was. 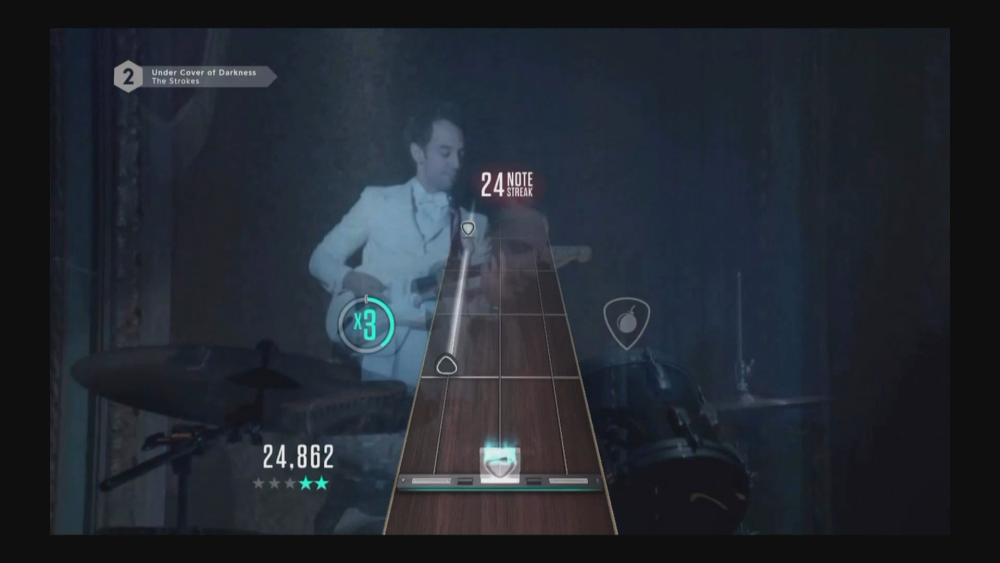 Above: Occasionally, connection issues will cause the game to adopt a strange resolution and fretboard (see previous shot for reference).

It loses a fight on three fronts

You can play the iOS version Guitar Hero Live three ways; hooked up to TV with a guitar, on your phone or tablet with the guitar, and on phone/tablet without the guitar. As mentioned above, the TV setup loses some important features. And without that, I don’t see where Guitar Hero Live fits on the app market. You could technically play the game in your car, but good luck finding a comfortable way to do it, since you’ll have to find a place to put your phone.

And as phone-only game, it suffers from being shackled to the brand name. With guitar, the game is $100, but you can buy it on the App Store for $50. And for that much money, you could buy just about every other rhythm game for the iPhone and have a better time.

This isn’t exactly a problem with Guitar Hero Live, per se, but Apple’s Lightning AV adaptor gave me nothing but problems. The first one my editor sent me didn’t work at all. The replacement I got at the Apple store makes the game flash on occasion. So if you want to hook it up to a TV, you may want to look into getting an Apple TV (though we were unable to test that configuration for this review).

You don’t have play Guitar Hero Live on a console, but you probably should. The iOS version loses features and quality the console versions have, and although this version is more portable, it finds itself in a strange spot; who, exactly, does not own any kind of console but desperately wants to play Guitar Hero?

If you have no other recourse, then getting the iOS version of Guitar Hero Live might be for you. But even then you may want to reconsider.

Guitar Hero Live for iOS is out now for iPhone, iPad and Apple TV. The publisher provided GamesBeat with a copy of the guitar version of the game for this review.