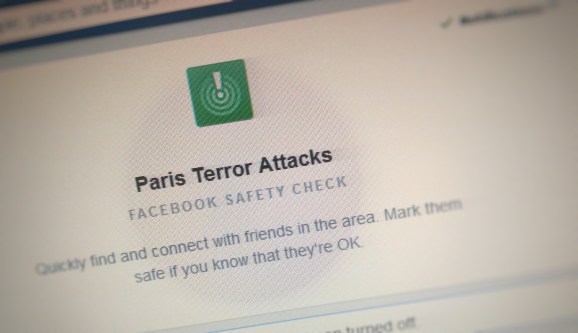 In the wake of the terrorist atrocities that left 129 people dead and many more wounded in Paris on Friday, tech companies did what they could to express solidarity with a grieving nation. One of those companies was Facebook, which activated its Safety Check feature to help people in the French capital tell loved ones that they were safe.

Facebook launched its Safety Check feature in October 2014, with the intention that it be used for people caught in natural disasters. While many appreciated being able to use the feature in the recent Paris attacks, the social network was heavily criticized for its selectivity in activating the feature for the Paris attacks but not for the Beirut bombings, which had happened a day before (not to mention the many other terrorist attacks that happen around the world, such as the Kenyan university massacre which also happened this year). Mark Zuckerberg eventually responded to the criticism on his Facebook page.

“You are right that there are many other important conflicts in the world,” he continued. “We care about all people equally, and we will work hard to help people suffering in as many of these situations as we can.”

Alex Schultz, vice president of growth at Facebook, also responded to the criticism, saying that the decision to activate Safety Check specifically for the Paris attacks was due to the level of activity Facebook was witnessing on the social network. “In the middle of a complex, uncertain situation affecting many people, Facebook became a place where people were sharing information and looking to understand the condition of their loved ones,” he said. “We talked with our employees on the ground, who felt that there was still a need that we could fill. So we made the decision to try something we’ve never done before: activating Safety Check for something other than a natural disaster. There has to be a first time for trying something new, even in complex and sensitive times, and for us that was Paris.”

It is true that there has to be a first time for trying new things out, but it was the timing of the launch, so close to the Beirut tragedy, that raised people’s suspicions that Facebook was showing preferential treatment to a specific region of the world, namely Western Europe. But moving forward, Facebook has committed to activating Safety Check for other “serious and tragic” incidents. “We want this tool to be available whenever and wherever it can help,” added Schultz.