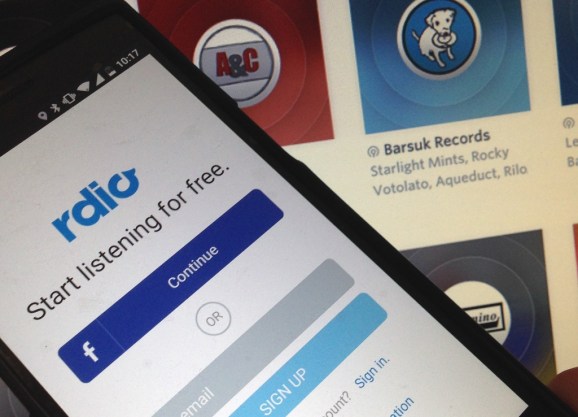 Pandora will acquire “key assets” from streaming music technology company Rdio for $75 million in cash. The move comes as Rdio revealed it sought bankruptcy protection in the U.S. Bankruptcy Court for the Northern District of California. Pandora will be gaining technology, product, intellectual property, and people from Rdio.

In an email provided to us by Rdio, the company said that the acquisition will allow Pandora to build a stronger, ad-supported radio service experience: “The result will be the industry’s best combination of streaming radio and subscription songs on demand.”

A “significant number” of Rdio’s employees will be retained at Pandora, but some have been laid off. Perhaps the most notable of those is Rdio’s head, Anthony Bay, who will not be joining the new company.

In a canned statement, Pandora’s chief executive, Brian McAndrews, said: “Whether streaming through radio, on-demand or in-person at live events, Pandora is building the definitive source for fans to discover and celebrate music. Wherever and however fans want to hear music, we intend to be their go-to destination.”

On an investor conference call, McAndrews said that the Rdio acquisition is all part of a broader plan for growing Pandora’s user base and transforming the company. The move follows deals the company has with Sony/ATV, as well as its purchase of Ticketfly. He added that the vision is to be the “go-to destination for music,” spanning on-demand streaming, radio, live events, and much more.

So why buy instead of build in-house? Pandora felt that once it had determined its strategy, the next step was to execute as quickly as it could. By buying Rdio, the company is now able to “leapfrog” over obstacles and mistakes that it may come across. However, McAndrews was adamant in maintaining that Pandora could have built an on-demand service on its own if it had wanted to. Moreover, he clarified that the company only wanted the technology and people to help it get to the next level — purchasing all of Rdio would have been a “challenge and a drain.”

Based on what McAndrews called Pandora’s position of “strength,” the company also feels that it continues to be in a strong position to compete against the likes of Spotify and Apple Music. McAndrews claimed that Pandora is the only one that has monetized the service the right way and said the company has an enormous amount of data at its disposal. With discovery, personalization, and effortlessness, he said that Pandora is capable of building a whole slate of offerings across recordings and live music.

With the newly acquired technology and staff, Pandora is opting to bring its own “upper-tier offerings” that will supplement Pandora One.

Founded in 2010, Rdio’s service has been available in 60 territories worldwide and allowed on-demand access to over 12 million songs. The company has raised $125.7 million in funding from Atomico, Skype, Mangrove Capital Partners, and famed entrepreneur Janus Friis. In October 2014, the company’s parent entity, Pulser Media, raised $108 million to fund Rdio — so where did that money go?

Shares in Pandora closed down 0.15 percent at $13.42 in normal trading, but have fallen another 0.50 percent after hours.

The acquisition deal is expected to close in the first quarter of 2016.