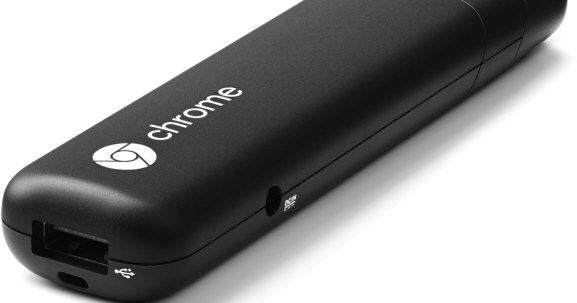 Google and Asus today launched the Chromebit, an $85 HDMI stick that allows users to plug into any screen and run Chrome OS straight out of the box — assuming they also link up a USB or Bluetooth mouse and keyboard. First unveiled in March, the Chromebit is the most affordable way to get Chrome OS.

The 75gm candy bar-sized dongle is “a full computer,” Google says, and envisions it for use-cases like watching videos and movies, showcasing photos, exploring Google Earth, or playing games through the Chrome Web Store (as well as “some apps from [Google] Play”).

In a nutshell, the idea here is to “upgrade any screen—even a TV—to a modern computer that’s easy to maintain, secure, and manage.” Emphasis is also being placed on its being an ultra-affordable solution.

To that end, Google is today announcing Single App Chrome Device Management (Single App CDM), which it calls “a more streamlined console just for digital signs and kiosks… priced at $24 per device per year.”

“Single App CDM offers ongoing reporting that monitors the health of your kiosks and signage at all times. You’ll get alerts if a device goes down and can remotely reboot the device without dispatching a technician. You can also get live updates about system usage and capture screen grabs to see exactly what viewers see,” Google said.

The Asus Chromebit comes with 16GB of internal storage and 2GB RAM.

At the end of September, Google announced the new Chromecast Audio and second-generation Chromecast, for $35. But unlike the new Chromebit, Chromecast is a simpler media-streaming device that allows users to “cast [their] favorite TV shows, movies, music, sports, games, and more” from their smartphones.