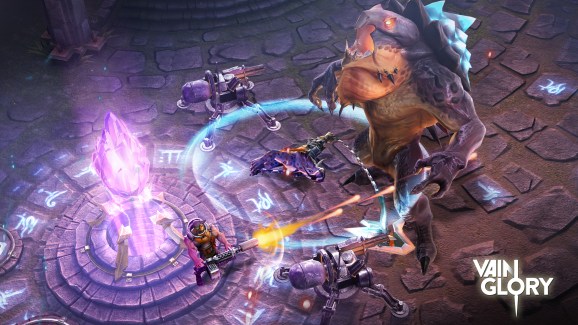 League of Legends and Dota 2 get all of the attention, but a different kind of competitor is also growing.

Vainglory told GamesBeat that Nvidia and Amazon will sponsor the season finals for the mobile multiplayer online battle arena (MOBA), which take place at the Esports Arena in Santa Ana, California, for North America and at the ESL Studio in Katowice, Poland for Europe. MOBAs are one of the most popular kinds of game these days, largely because of their competitive and exciting esports scenes. The top 20 nations alone will spend $83 billion on video games by the end of 2015, according to intelligence firm Newzoo. However, while the big dogs in the genre like League of Legends and Dota 2 are PC games, Vainglory is for mobile.

While being on mobile might seem like a negative for a complicated kind of game like a MOBA, Vainglory continues to grow. It had 1 million views in Twitch in September, which is five times as many as it had in March. Vainglory also expands internationally, with the game entering the Chinese market today.

“From the start we focused on creating a game that we hoped one day would be worthy of competitive play,” Kristian Segerstrale, chief operating officer and executive director at developer Super Evil Megacorp, told GamesBeat. “The growth of the competitive community this year has taken us by surprise, however. We’re thrilled that this quarter’s global prize pool has grown to over $150,000 and with major tournaments on four continents and professional esports teams like G2 Esports and SK Gaming involved. ”

It’s been a slow battle for Super Evil Megacorp to convince gamers that MOBA can work on mobile.

“Whenever you do something that hasn’t been done before you inevitably get early adopters, and you get sceptics,” Segerstrale said. “It’s been amazing to see what a difference the past year has made. As more and more players have started playing Vainglory, the overwhelming scepticism of ‘MOBA on touch screens’ has turned into a mix of grudging acceptance and enthusiastic support from some of the most vocal influencers in the MOBA community.”

With expansion into China, it seems likely that Vainglory will continue to grow.