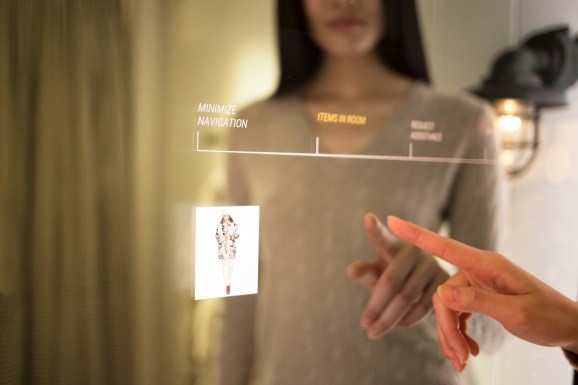 A new startup called Oak Labs is bringing smart dressing rooms to Ralph Lauren and the broader retailer landscape ahead of the holidays.

To compare Oak Labs mirror to character Cher Horowitz’s computerized closet in the movie Clueless is a disservice. The mirrors are far more technologically advanced than Cher’s old white IBM.

When a customer walks into one of Ralph Lauren’s smart dressing rooms, the lighting immediately brightens and the items they’ve picked out from the store appear on the mirror. Oak Lab’s smart mirror recognizes and accounts for any clothing a customer brings into the room and allows them to ping a sales representative if they need something in another size or want to try a different article of clothing altogether. The mirrors also come equipped with five language options and allow users to change the lighting in the room to one of three schemes.

The technology is very similar to a project cofounder Healey Cypher was working on a year ago at eBay.

Oak Labs was cofounded earlier this year by a former head of retail innovation at eBay enterprise group, Healey Cypher, along with Michael Franklin, Flynn Joffray, and former head of design at eBay retail innovation, Darren Endo. While at eBay, Cypher worked on developing interactive mirrors that do many of the same tasks that Oak Lab’s mirrors do, like recognizing clothing using radio frequency identification tags. But eBay’s mirrors also included a checkout option, allowing users to make purchases directly from their dressing room using PayPal. The company launched the new technology at the Rebecca Minkoff store in Soho last November.

EBay’s retail innovation unit was in flux after a key investor pressured it to reorganize. As part of the change-up, it was decided that eBay enterprise would be sold or spun off. At that point, Cypher decided to quit eBay and go into business for himself.

Since its founding in May, the company has raised $4.1 million in funding, led by Wing Venture Capital.

In the last 15 years, a handful of retailers have played around with putting touch screens in their dressing rooms. Prada, most notably, spent millions of dollars making its stores “smarter” in the early 2000s. More recently, Macy’s added smart dressing rooms to five of its stores. Retailers believe that if they can quickly get customers into the fitting room with the right clothing, in the right size, those shoppers are more likely to make a purchase. Smart dressing rooms help cut down on the inefficiency of hailing a sales rep and sending them out onto the floor to search for an item.

No retailer has yet been able to really nail this experience or make it cost-effective, and Oak Labs certainly has its work cut out for it. To make the business work, it will need to hit a large number of retailers and likely expand into other products.

In the meantime, you can go to Ralph Lauren’s 5th Avenue store in New York to get a little taste of the future.

*Update: This article has been corrected to reflect the correct spelling of Oak Labs cofounder Healey Cypher. An earlier version referred to him as Healey Cipher.