The second wing of Hearthstone: Heroes of Warcraft’s newest adventure, The League of Explorers, is out now. This guide will help you beat all of the bosses (or mine cart chases) inside so you can earn those new cards. 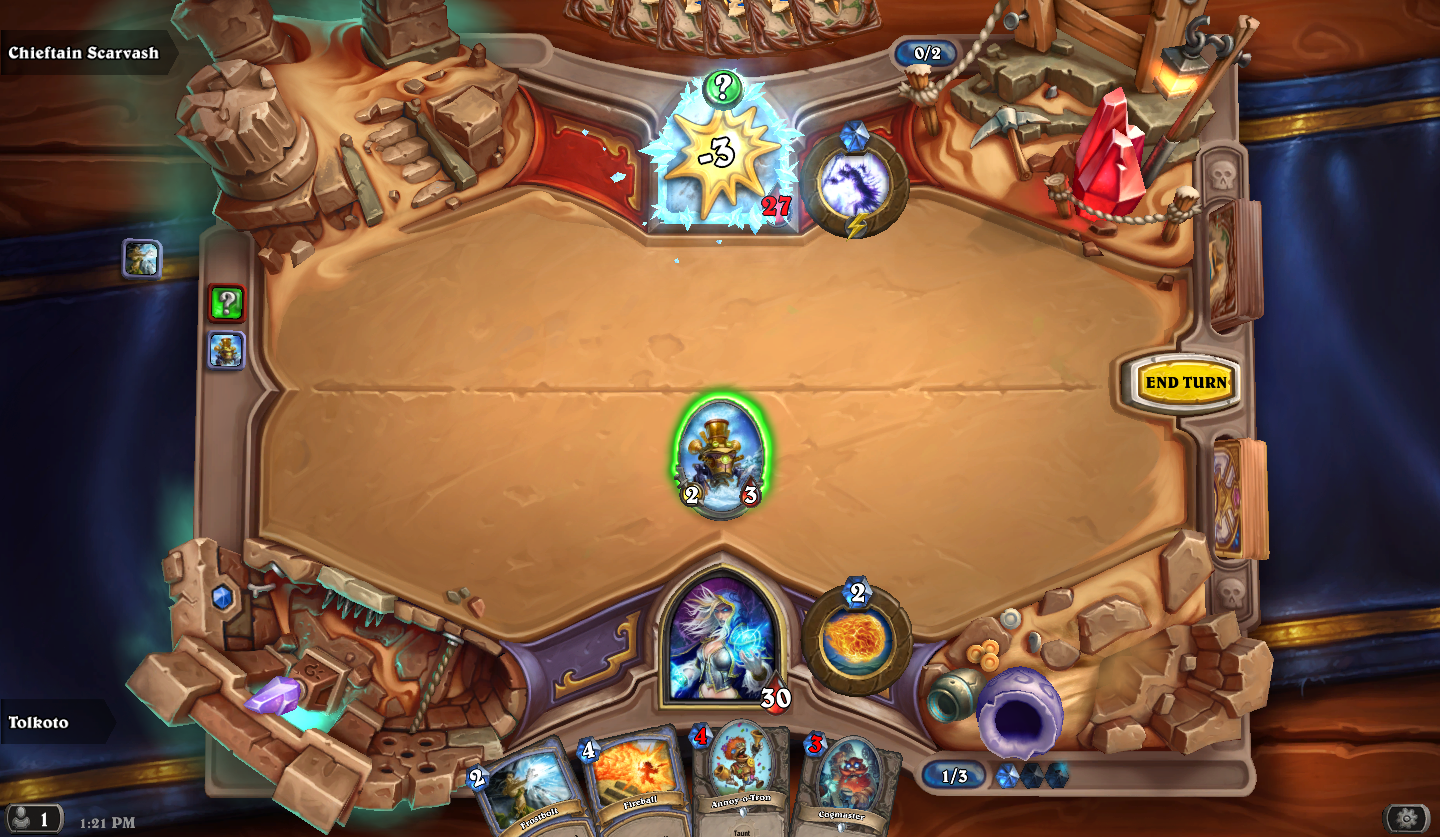 Above: Use your cards wisely in this one.

Scarvash’s passive hero power will make either your Minions or Spells cost 2 more mana than normal. You can combat that this by using a deck that has a decent amount of both, so you can still play cards at their normal cost. I used a Mech Mage deck, which has good tempo and damaging spells like Fireball and Frostbolt. Mage is the way to go here, since it has the most spells that can cause early damage to hero’s face. Hero power: Flee the Mine! (Escape the troggs.)

This is a unique encounter. It’s similar to Temple Escape from Temple of Orsis in that you simply have to survive for 10 turns to win. However, you don’t get to select one of your own decks for this fight. Instead, you play with a premade deck filled with special cards, all 1 mana spells and minions. You also get a 1 mana Hero power, Throw Rocks, that deals 3 damage to a random enemy minions. Your mana pool never goes above 2.

The enemy’s board will spawn with three random minions, with two more showing up every turn. The toughest possible one that can show up is the 6/6 Lumbering Golem. One of the spells you can draw is Dynamite, which deals 10 damage. Save these for the Lumbering Golems.

A lot of this is going to depend on luck. You can’t make a deck, so can’t really prepare for this fight. You just have to hope you get the right cards to help you deal with the enemy’s board. Boom!, a spell that deals 3 damage to all enemy minions, is definitely a big help, but make sure you don’t waste it early when the enemy’s board is relatively empty. If you have two of them, you can clear out all of the enemy’s minions in one turn. Above: So many statues.

Hero power: Stonesculpting (Summon a 0/2 Earthen Statue for both players.)

Every turn, Archaedas will give both players an 0/2 Earthen Statue. Alone, they’re useless, but other cards can make them more powerful. He can use a 2 mana Spell called Animate Earthen that give +1/+1 to all of his minions. He can also use cards like Dire Wolf Alpha (which gives +1 attack to adjacent minions) to make those Statues more useful. He can also play a 2 mana spell called Shattering Spree. It destroys all Statues on the field, but deals 1 damage for each one. This is actually a blessing in disguise, since it can help remove Statues from your board and make room for more useful minions.

To beat him, take a page from his own playbook. Use minions and spells that will buff your Earthen Statues. I was able to beat Archaedas with my Tempo Pally deck thanks to spells like Blessing of Kings and the Avenge Secret making those Earthen more powerful. Having Consecrate, a spell that does 2 damage to all enemy Minions, also really helped. Sword of Justice is also great, since it adds +1/+1 to any minions that spawns on your side, including those Statues.