The Legend of Heroes: Trails in the Sky Second Chapter has been a long time coming. Though released in Japan back in 2006, an English translation of the game has taken years to complete, due to various obstacles and restructuring the translation team faced (you can read more on that story here). And with the coming deluge of JRPGs, it seemed fitting we’d get a game to remind us why the genre’s so great.

Second Chapter, available now on PSP (reviewed), Vita (thanks to backward compatibility), and PC, features an enormous world filled with dozens of characters to talk to and all sorts of parts unknown to uncover. In my 78 hours with the game, I saw of lot of fun, intimate moments propped up by a great main cast and even better supporting one. These characters fleshed out their world and made it seem much larger than the areas I visited. This world reminded me why I loved inhabiting these fanciful realms.

But though I liked a lot of what it had to offer, Second Chapter also showed me why they don’t make games like this anymore. And for most of my time with it, but I slogged through it, waiting for the moment it would end.

The world and characters make you care

Second Chapter makes a big deal out of creating a large, overarching world with a rich political history. Even though the plot uses the conflict between the countries of Liberl and Erebonia as a backdrop to the main plotline revolving around the mercenary Bracer organization, you get a great sense of the region’s history. My story was only a small part of this world, even as that late became key to its survival. It has too many other people with their own problems to think otherwise. What’s more, I wasn’t pushed to solve most of them, but rather observe.

Nothing makes this shine through more than Second Chapter’s characters. Although many of them fall into JRPG tropes (the spunky hotheaded heroine and her stoic boyfriend, the angry bruiser, the martial arts master, etc.), the dialogue between them makes you feel like all the characters live in a world existing outside of these conversations. It has the occasional long-winded explanation to a character that feels out of place, but for every one of those, a dozen or so conversations play out naturally.

I’ve never played the first chapter of Trails in the Sky and have likely missed a lot of the nuance of a few character interactions, but the moments I felt the world was at its most real was when Estelle, the main character, reunited with a new party member I’d never heard of before. It was as though I was taking a vacation with someone returning home, and it showed how much thought developer Nihon Falcom has put into creating moments that have little to do with plot but make every character more relatable.

This is all amid a world-ending conflict, and these moments made me understand why fans were so desperate for this sequel — not for a resolution to the larger story, but for its myriad smaller ones. Even not having played the first game, I wanted to know where these characters would end up.

The characters and the world they inhabit set Second Chapter apart from its JRPG competition, and it looks like Falcom knows that. No matter what difficulty you’re playing on, you have the option to lower it for any encounter that gives you trouble before you retry, and on one occasion, I could continue without having to face a particularly difficult boss toward the end. Because the combat system doesn’t live up to its ambitions (more on that later), I appreciated the ability to power through some of the harder fights.

And because of the number of party members you have at your disposal (and because you can only take four of them out at a time), I also appreciated the leveling system, which greatly accelerates the amount of experience an underleveled character gets. Certain parts of the story required that I add to my party a character I’d completely ignored until then, and by the time I got rid of them, they were on par with the rest of my party without me having to go out of my way to level them up. 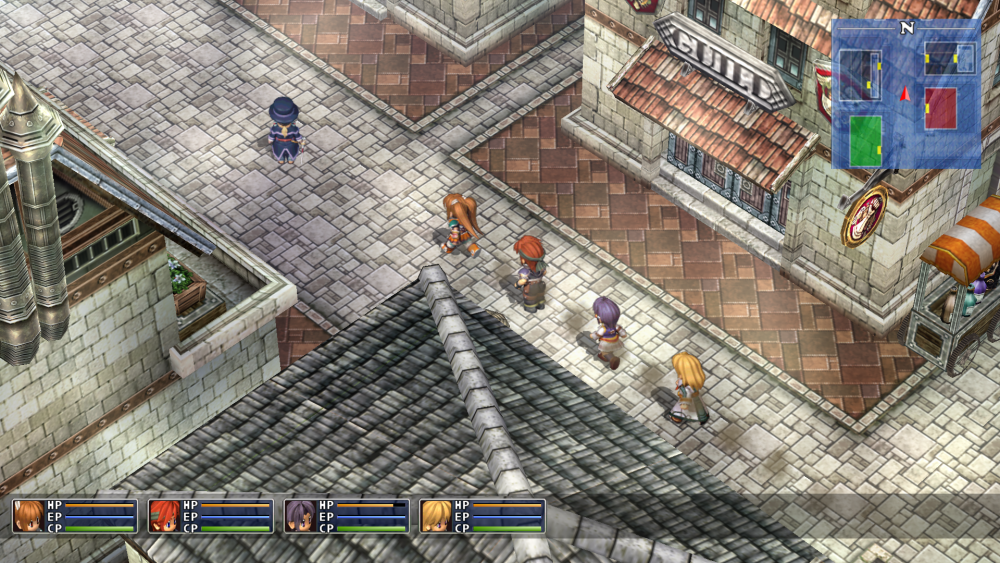 Death by a thousand shortcuts

Second Chapter begins just as Joshua (one of the first game’s main characters) discovers he’s been the unwitting puppet of Ouroboros, an illuminati-like organization, and suddenly leaves Estelle (the other main character) behind to deal with the repercussions of his absence. At first, I thought this was an interesting twist since JRPGs rarely follow each other this directly (instead choosing to create brand-new, self-contained scenarios). But it quickly devolves into another save-the-world plot. Estelle rebuilds her party from old and new friends and sets off to stop the world from ending. Even as I started, it felt like I’d done this a dozen times before — not a good start.

And while I liked many of the characters, others felt like plot conveniences to help writers create intense moments without earning them. Joshua specifically made me roll my eyes countless times, as his newfound omnipresent awareness allowed Second Chapter to create inescapable situations for the rest of the main cast, only to have him swoop and find an impractical way of getting everyone out unscathed. Other characters also perform some questionable leaps of logic that lead to them being on opposing sides. The plot prioritizes having a few key moments play out and then takes the easier, less convincing route to get there.

Second Chapter also feels like it takes a few shortcuts when it comes its structure. It simply doesn’t do enough with its own formula to really differentiate from other JRPGs; even series as old as Final Fantasy or Dragon Quest have found ways to keep their core conceits fresh by reinventing themselves. In Second Chapter, however, you’re following a quest line from town to town, and the first 40 or so hours felt like an absolute grind even though I was ignoring most of the monster encounters. You venture into a city, do a few part time jobs as a Bracer, solve a mystery if you want to, and then head toward the end-of-chapter boss, telegraphed from miles away.

This is the most standard of JRPG setups in both plot and structure, and it doesn’t do anything to make them worth revisiting.