SANTA CLARA, California — Intel acknowledges that demand for PCs is sliding. But it has a strategy for stabilizing the market by segmenting the market, innovating with new products, and improving experiences for users with ideas such as making passwords go away, said Kirk Skaugen, head of the Client Computing Group at the world’s largest chip maker.

Intel is the bellwether of the PC industry, and it shares the burden with Microsoft of having to invest heavily to keep demand growing. Intel’s four-year collaboration with Microsoft on Windows 10 and the development of the code-name Skylake processors (renamed Intel 6th Generation Core processors) represents the biggest part of Intel’s efforts to keep the PC relevant.

Hundreds of Skylake-based PCs are launching this year. Compared to older PCs, those machines have 2.5 times the performance of the previous generation, 30 times better graphics, three times better battery life, and built-in security. With Windows 10, for instance, you can log into your computer using face recognition.

“We truly believe this is our best processor ever,” Skaugen said, speaking at Intel’s investor day in Santa Clara.

Skaugen said that the PC has an opportunity now because there are 600 million PCs out there which are four or five years old. There are a billion PCs in the installed base. Those PCs are ready for a refresh. And tablet demand is “saturated,” Skaugen said. He noted that market researcher Gartner reported that there are more people who want to replace their tablets with PCs now than vice versa. 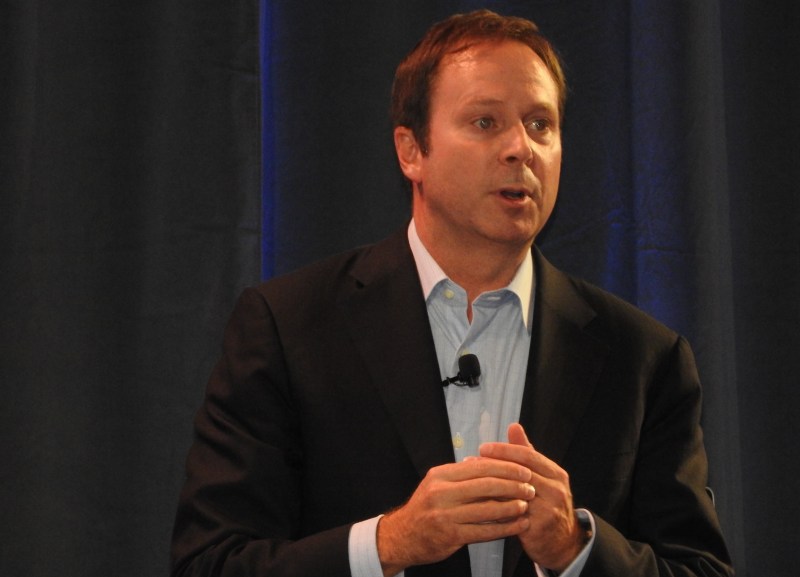 Above: Kirk Skaugen, head of the Client Computing Group at Intel.

“Our vision is to eliminate all passwords forever starting this year,” Skaugen said.

The company is committed to eliminating wires from computing, both on the networking side and in power delivery. Intel is also adding more segments for its chips across the brands such as Atom and Core processors.

Intel is also promoting new form factors: all-in-one computers, mini towers, and tiny “compute sticks.” Skaugen said that 2-in-1 computers, which combine tablets and laptops in one device, are now starting to eat away at demand for tablets. Intel has also invested heavily in low-end computing chips, and it is now 80 percent of the mix for Chromebooks, compared to 30 percent when those devices first began appearing. 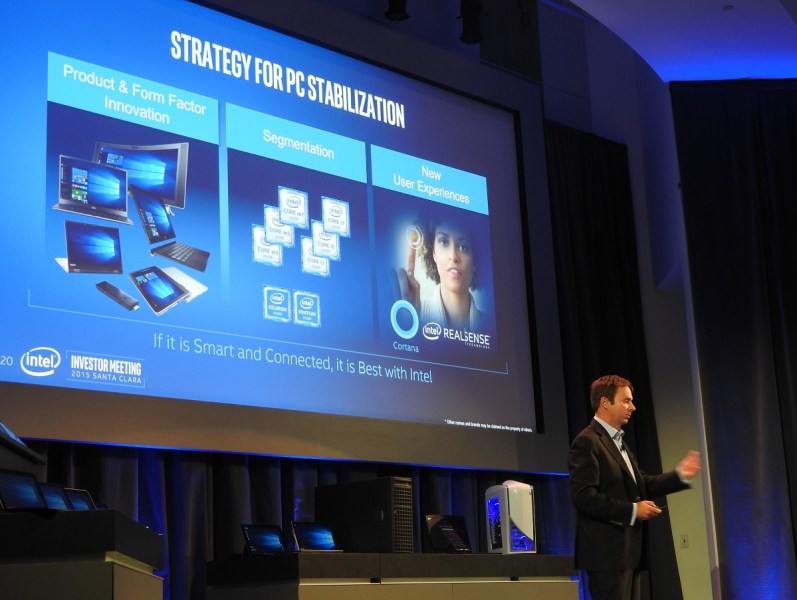 Above: Kirk Skaugen, head of the Client Computing Group at Intel.

Intel also continues to integrate different kinds of sensors, wireless connectors, and other new technology into the PC. The best $700 laptops now are about 9 millimeters thick and weigh around 1.7 pounds, with full Intel Core i7 processors, Skaugen said.

Intel is projecting flat to low-single-digit growth in revenue for the Client Computing Group.

“My job is to do better than that,” Skaugen said.

By 2017, Intel plans to introduce its first 10-nanometer processors, code-named Cannonlake, Skaugen said. Current chips are 14-nanometer devices, with 14 billionths of a meter in between the circuits. The 2017 chips will be smaller, faster, and more power efficient.

Linley Gwennap, founder and principal analyst of the Linley Group, said in an interview, “The innovation in the PC isn’t as reliant on the processor as much, and it’s more about the form factor. They aren’t pushing performance as much. They are focusing on things like RealSense cameras and Cortana voice recognition. That may make use of the performance. In the near term, they may get a little upturn from the form factor innovations.”

Intel folded its mobile division into the Client Computing Group. The mobile device part of Intel’s business has been weak, as ARM-based rivals have won the lion’s share of the smartphone and tablet chip businesses.

Intel is trying to reduce the losses for mobile-related businesses in 2016, improving overall mobile profitability by $800 million in 2016. That number tells you that Intel has been losing billions a year in mobile.

“We believe everything has to be connected and smart,” Skaugen said.