MONTREAL — After Electronic Arts scored a deal to make Star Wars games in partnership with Disney’s Lucasfilm, the company decided to add more creative firepower. Among the new blood are Jade Raymond, the former creative exec at Ubisoft and now founder of EA’s Motive game studio in Montreal, and Amy Hennig, a former script writer and game director at Naughty Dog and one of the principal creators of the Jak & Daxter and Uncharted video game franchises. She’s also the new creative director at EA’s Visceral Games studio in Redwood City, Calif.

Creators like Hennig and Raymond have kept triple-A console and PC games at the top of the pyramid of the $91 billion game industry. Their games have generated hundreds of millions, if not billions of dollars for the companies they have worked for. They are reminders that video games are fundamentally at their heart a creative business, and they believe deeply in the importance of stories in video games.

Now they’re teaming up to create games based on the Star Wars universe to coincide with the launch of the new Star Wars movies coming from Disney. We asked them why they wanted to join EA to make Star Wars games and how they became convinced that they would have a lot of creative freedom to create new stories within the canon of George Lucas’ enduring entertainment franchise.

Neither Hennig or Raymond contributed to EA’s first Star Wars title, Star Wars: Battlefront, and they’re not ready to talk about what they’re working on for future games. Multiple EA studios are working on Star Wars titles. Raymond oversees both Visceral and Motive while Hennig is attached to Visceral, which is run by general manager Scott Probst.

Along with Gamesindustry.biz journalist Brendan Sinclair, I was able to interview Hennig and Raymond about game storytelling at a dinner during the Montreal International Game Summit this week. I caught them just before they did a fireside chat the next morning in front of the MIGS 15 audience. 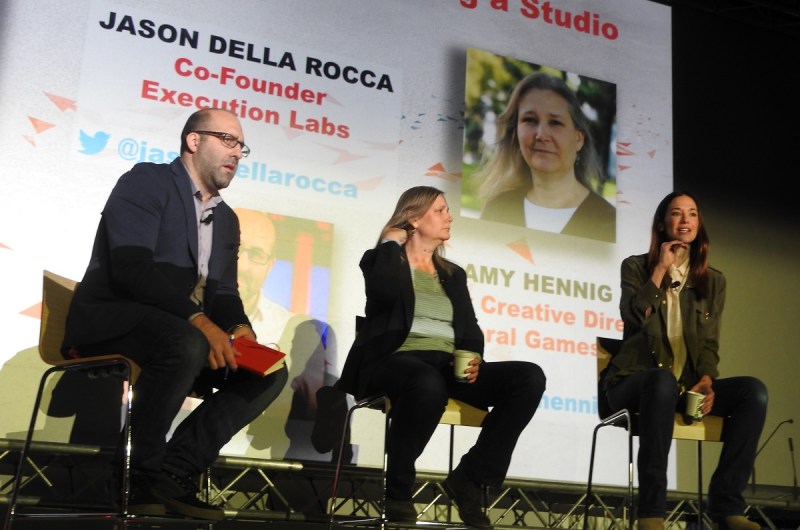 GamesBeat: What philosophy do you have about storytelling? What’s your own talk you would give about how to do story in a game?

I would argue that people who call out Journey as not being a traditional narrative—It’s an incredibly traditional narrative. But the player engages with that story through inference, so you feel like you’ve experienced it. Our challenge as game designers is not so much to be dogmatic about the right or wrong way to tell stories.

One form of interactivity is interpretation. I find poems and lyrics more interactive than a non-fiction book, because I’m actively engaged in interpreting that experience through the collision of metaphor and information. Games are like that. If you lead the player, even at the level of a linear-authored story that allows room for interpretation, it’s already more interactive in some way. The more austere a story is, like Journey, it leaves even more room for a player. But it doesn’t mean that anywhere else on that spectrum of authorship is right or wrong. It’s just a different genre.

Our goal as game-makers, always, is to make sure we enable as much player agency and choice as possible within the space that makes sense in the game. That doesn’t mean we want to make absolutely linear games where the player is just along for the ride. They should be able to freestyle within that experience. But there’s also a lot of evidence that people love being taken on a journey by a good storyteller.

GamesBeat: Your stories are better than the stories that other people tell, though.

Hennig: My stories? No, no.

GamesBeat: Or the stories in the games that you’ve made.

Hennig: That’s very flattering. But the games that have moved me the most are games like Journey, Ico, Shadow of the Colossus, and I think it’s because—Even though I’ve made very authored games, very traditional stories, my ability to interpret that experience within the frame of my own experience has been a more emotional journey for me.

Jade Raymond: I agree that there are different types of players, though, and they’re looking for different experiences in their games.

Hennig: Something I think is interesting philosophically is that idea of, what does a story mean? I don’t want to get dogmatic either, because I don’t like dogma about things. Like I said, story implied authorship. It implies intent and structure. A well-told story generally doesn’t meander. It has very specific landmarks and beats and upturns and downturns and obstacles and reversals. It has a resolution that you want to feel both surprising and inevitable. That’s story.

The risk of a game that is a completely open experience for the player, without any structure, is that a series of events will happen to the player and they may interpret that as story in their experience. But in the literal sense, is there a story if there’s no author? 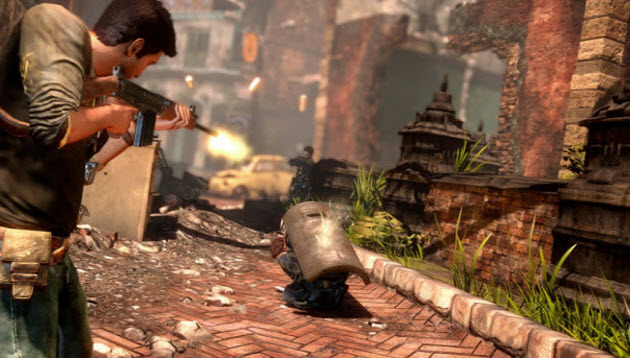 Above: Battle scene in Uncharted 2: Among Thieves.

Hennig: The more you leave the player to interpret their experience – if you don’t crowd them or control them too much – and the more room you leave for choice and the ability to freestyle the experience, the more they’re going to feel like they really lived that story. Those values are still present no matter what kind of story you’re trying to tell in a game.

While that’s something we’re still exploring, it’s completely valid to tell an authored story in a game. We’re just trying to figure out the best way to do that, with as much choice as possible, with as much discovery and creativity and agency on the player’s part that we can.

GamesBeat: I’m a big Uncharted fan. I do think that the leap from Uncharted to Uncharted 2 was a huge leap in storytelling. I’m not sure what it was, but —

Hennig: We were just firing on all cylinders.

Raymond: It’s always the second game, where you finally get to do what you wanted to do the first time.

Hennig: We didn’t even have that much time. But we had the whole studio. Everyone was raring to go and do all the things we weren’t able to do before. You’re just finding your feet the first time, writing the engine. Sometimes the stars just align, too.