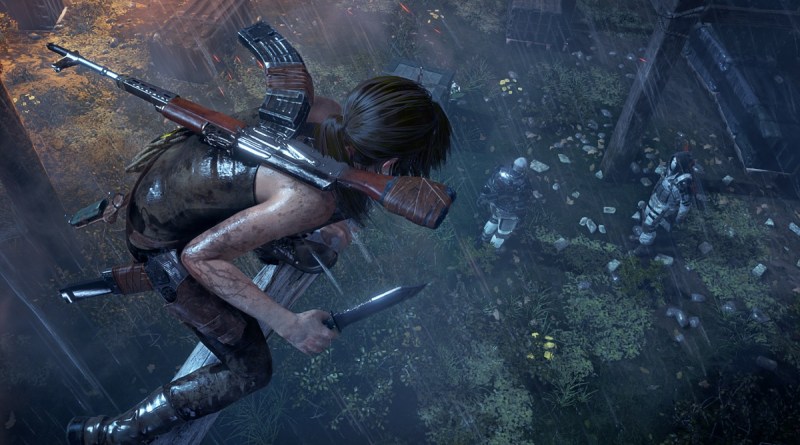 Above: Lara Croft is poised to kill from above in Rise of the Tomb Raider.

Hennig: That keeps happening to me. I’m finding games that are still in the plastic at home. What’s been your favorite game lately?

Raymond: How much have you played?

GamesBeat: I finished it. I had a pretty hellish last month or so. I finished Halo 5, Tomb Raider, and Call of Duty as well. I had to almost do some all-nighters. But Rise of the Tomb Raider, they’re living up to the empowerment side of that story now.

Hennig: That’s the one I want to play first and most. I love it.

GamesBeat: The last one transformed toward the end into this mass-murdering thing again.

Hennig: Tone is so hard in these things. But I just mean, the whole franchise holds a special place in my heart. And a lot of my friends still work there.

GamesBeat: They give better justification for all the action in this one. But the action at the end of the reboot was getting ridiculous. She’s going from being sympathetic for the deer she kills to taking out ten guys at a time.

Raymond: That’s always the dichotomy that I feel like would be easy to fix. But no one’s ever done it very well. Even in Batman. You race around your Batmobile running over pedestrians so you can save people. It just isn’t reflected so well. I can only criticize so much. I’ve done tons of dumb things like that.

Hennig: But it was called Assassin’s Creed. You kind of gave yourself permission.

Raymond: But that’s the hard thing in general about games. If you’re trying to be a hero, but you have the ability to do all these things, how do you follow a story that’s written in a particular way when the player is able to do anything?

Hennig: And what we do is so variable, so iterative, building these things. Sometimes the solution is in genre. It’s easier to work around that stuff if it’s a fantasy in some way.

Raymond: But I feel like the link should be—If, for example, you’re writing 2000 lines of dialogue for your story anyway, wouldn’t it be easier to just say, “I have these five bits I’m tracking. How many civilians have you killed?” And just reflect that somehow in the story, so that when you encounter someone, they comment, “Okay, you must be a real badass now, because you’ve been driving like an asshole.”

Hennig: But if you have a game that has cinematics, now you have to maintain all these branches. This character’s going to call you out for being a murderer versus—

Raymond: But maybe there’s a smart way to do it. The camera’s on you when the character says X line, but then—You have to plan for it, but you can probably do something smart.

Sinclair: I like the way developers account for that but don’t quite do it adequately enough. Do you remember True Crime? I loved that game, because as a cop, I could go out and shoot five people in the street and get negative five cop karma, and then give five speeding tickets and go back to neutral. And people would react to you based on the cop karma numbers, so clearly the developers looked at it and said, “We need to make some kind of adjustment here for whatever actions you’re performing.” They had the idea, but the implementation is just kind of —

Raymond: When I think about games—You go to school and you take tests. You get it back and you got a 90. Great, good job, you’re a smart kid, pat on the back.

After you finish school you go out in the real world. You get evaluations at your job, but it’s all in this soft style. Who knows? It’s not like I got the math questions right. I don’t really know how well I’m doing. Your life is missing that sense of clear accomplishment and doing well. Promotions are so vague.

What I love about games is that a lot of these systems are trying to boil down the rules we deal with in real life into something simple. You can have the sense of clear satisfaction that you don’t necessarily get in real life after you finish school.

Sinclair: We play games because we miss math tests?

Raymond: That’s what I’m saying, if you want to put it very simply. We miss that digestible—There’s no formula. It’s interesting. In RPGs you see it in the clearest way. You can invest in different points and things that try to distill the skills we use in life. You want to be strong? You want stamina? You want intelligence? You want charisma? All of those things.

I’m playing Fallout now, and it’s funny. It just takes the rules of human interaction and systematizes them so they’re understandable. In real life you can’t do that, because it’s not as simple as going with your strategy of maxing out charisma. But I think that’s cool about games. You get to experiment with a lot of different approaches.

Sinclair: Is that another uncanny valley, though? Where you have systems that get closer and closer to being accurate to life, and any flaw stands out that much more?

Raymond: Maybe? But that’s what’s interesting in games. If you get the tone right, it can be a comment, a social commentary, rather than—For example, I’m a huge fan of science fiction. What I always loved about it is the way it exaggerates things going on in the present day to an extreme level as a way of highlighting what’s going on. “If you continue what you’re doing now, this is where you’ll end up.”

Games, by doing that kind of simplification—If you do it with meaning and intent, you can also make people more aware in a powerful way. Instead of falling in the uncanny valley, the opposite way to look at it is you can highlight some part of the human condition, some part of the rules we have in place in society.