MONTREAL — In ways big and small, China is expanding its presence in the global gaming market without interruption. This is surprising in part because the Chinese stock market fell this year, and that hurt the ability to raise easy money.

But this week, Chinese companies showed what they could accomplish even during a so-called downturn. Shanda Games went private in a $1.9 billion transaction in a kind of deal that is increasingly common as publicly traded Chinese companies seek higher valuations in private markets. China’s NetEase, which publishes Blizzard’s World of Warcraft in China, also reported a billion dollars in quarterly revenue for the third quarter ended Sept. 30. It is about to launch a Kung Fu Panda mobile game. Chinese companies are becoming very large on a global scale, as China has become the world’s largest games market, and Chinese companies are showing up in places you wouldn’t expect.

I had a chance to discuss the continuing expansion this week with Chinese game companies that attended the Montreal International Game Summit (MIGS 15). Daniel Su, general manager for North America at Chinese game company Game Hollywood, recently relocated to Montreal. The Guanzhou-based publisher of the popular Wartune game bypassed the more popular West Coast of the U.S. to go after the programmers and other creative professionals in Montreal as part of an expansion into the Western game market.

“In Montreal, the business cost isn’t very expensive,” Su said in an interview with GamesBeat. “We are looking for graphic artists and others who can improve what we do. We also want to develop our PR and marketing resources in North America. Montreal is a good middle place for this.”

Game Hollywood was founded in 2011, and it has more than 250 employees in six countries. It could stay in China and thrive, but there is an increasing amount of competition in the Chinese market, both in online games and mobile. The Chinese government is urging China’s game companies to expand worldwide to grab a greater share of the world market.

But Song Jianxin, the deputy director of the digital publishing department for the Chinese government’s SAPPRFT agency (State Administration of Press, Publication, Radio, Film, and Television), said that it is increasingly important for Chinese game companies to expand worldwide and own their own intellectual property that can be popular not just in China but in the global market. 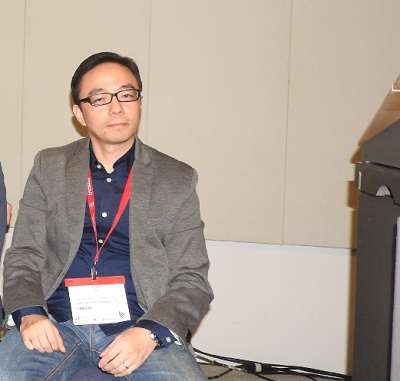 Above: Ringo Zhu of China’s CMGE.

He added, “We should not merely emphasize the domestic market. We have to go out into international competition. Then we can have more opportunities to occupy the high land of the gaming industry in the world. Only by doing so can we promote Chinese games and Chinese culture to the globe. We should not merely visit the overseas market. We need to go further, and be involved in intellectual property collaboration and content creation.”

Game Hollywood’s Su is doing just that by being one of the only Chinese game companies to plant roots in Montreal. His company has the benefit of owning its own intellectual property, Wartune, which has 10 million registered players. It also recently released DDTank Mobile in North America, Europe, and Asia.

Meanwhile, Ringo Zhu, business development director at China Mobile Game and Entertainment (CMGE), has also set up an office in Toronto, Canada, as part of a plan to expand the mobile gaming company’s presence in the West. CMGE has 1,200 employees in five countries, and it is looking to invest in mobile game companies in the West.

“Investment in the game industry has dropped a certain percentage, but from what I’ve seen and heard, Chinese companies and Asian companies are still trying to expand their investments in the western world,” Zhu said during my panel on game funding at MIGS 15. “CMGE, with our investments in mainland China, Korea, and Taiwan. We’ve invested in game engine providers, game developers, instant messaging developers, and comics and animation creators. But we’re also trying to find opportunities in Canada and other parts of the western world.”