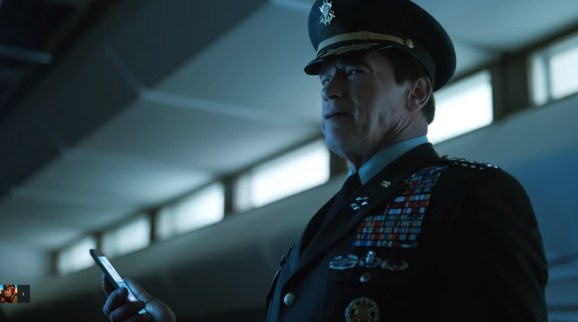 Arnold Schwarzenegger stars in the new ad for Mobile Strike from Machine Zone.

Schwarzenegger is the celebrity promoter for the new title from Palo Alto, Calif.-based Machine Zone, which is currently at the top of the heap in the $30 billion mobile-game business thanks to its mega hit Game of War: Fire Age.

Published under Machine Zone’s Epic War studio name, Mobile Strike is currently No. 23 in top downloads on the app stores, according to market researcher App Annie. It is No. 46 on the top-grossing list. That is a pretty good result, considering Machine Zone is only now beginning to advertise the game.

The ad shows a war room where a big battle is being monitored in real time. Schwarzenegger, dressed as a general, shows up and says, “The best defense is defense. Use everything you can to protect your alliance. … Join me, and strike!”

The app is clearly getting some benefit from the huge audience of millions that have downloaded Machine Zone’s big hit, Game of War. That fantasy-strategy game (promoted with ads that starred supermodel Kate Upton and pop singer Mariah Carey) has been a top-grossing game since it came out two years ago. Game of War has been No. 1 on the top-grossing list on the app stores since the summer, when it surpassed Supercell’s Clash of Clans.

I’ve been playing Mobile Strike since it came out. It is a carbon copy of Game of War in terms of gameplay, monetization, and alliance combat. But it has a modern-combat setting, and clearly the Terminator is the right pitch man for that kind of title.