At the Android Dev Summit today, Google announced Android Studio 2.0, the second major version of its integrated development environment (IDE). Version 2.0 adds Instant Run, a faster Android emulator, and a new GPU profiler. The latest release isn’t yet ready for all developers, but you can get a preview of the first feature now in the Canary channel.

After two years of development, Google released Android Studio 1.0 in December 2014. Over the past year, the company has released five new versions, the latest one just last week. To be clear, version 1.5 is a stable release, while 2.0, which you can run in parallel with your current version, is still in preview. Stephanie Cuthbertson, Google product manager for Android, told VentureBeat that since the IDE’s announcement, the team has made 103 public pushes into Android Studio’s channels (Canary, Beta, and stable). She added that these five major releases focused on making Android Studio “delightful” and “stable.” Version 2.0, meanwhile, is all about speed. 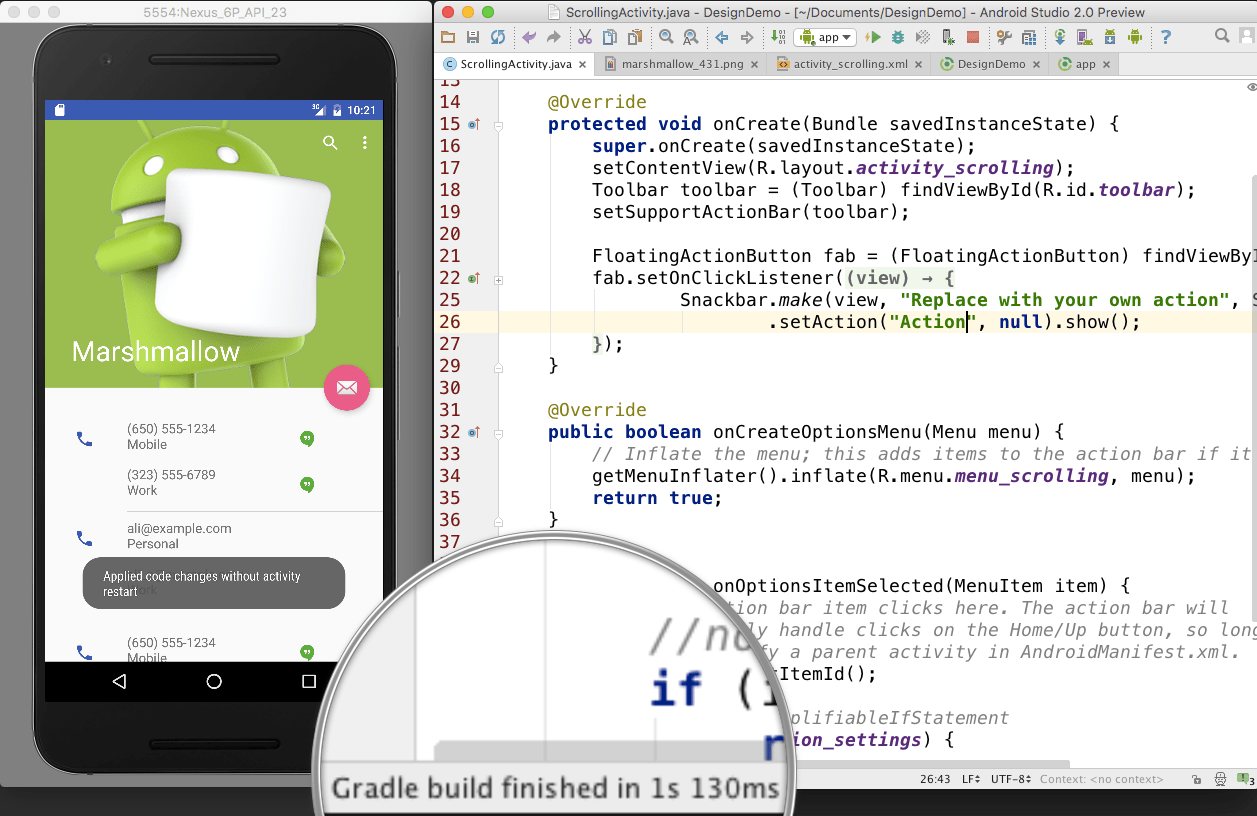 Now that Android Studio has a proper foundation, Cuthbertson emphasized the focus is on the fact developers specifically requested making app builds and deployment faster. She said Android Studio 2.0 is 2x to 2.5x faster for building code (for a full build), while incremental builds can be up to 50x faster.

If you’re an Android developer, Instant Run is supposed to dramatically improve your workflow by letting you quickly see changes running on your device or emulator. The feature lets you see your changes running “in a near instant,” which means you can continuously code and run your app.

New projects created with Android Studio 2.0 are set up to work with Instant Run automatically. For pre-existing apps, you can ensure the correct Gradle plugin is selected by opening Settings/Preferences, clicking Build, Execution, Deployment, Instant Run, and then finally on “Enable Instant Run…”

The first time you hit Run, Android Studio will perform normal compilation, packaging, install steps, and run your app on your device or emulator. After you make edits to your source code or resources, however, pressing Run again will deploy your changes directly into the running app.

The Google search team has also added some functionality to Android Studio: Developers can generate and test deep links directly right from the IDE. Just last week, Google revealed that its search index has 100 billion deep links into apps and that over 40 percent of Google searches on Android now surface app content.

Android Studio is based on IntelliJ, an open-source Java IDE. Android Studio 2.0 is based on IntelliJ 15, which launched just a few weeks ago, and thus has the following features: instant preview for Find in Path, Run configurations with a state indicator, enhanced debugging for the Java programming language with Force Return (gives greater control over flow of execution), improved UI for testing, one-click run of application or tests, and adjustments for color deficiency. Android Studio 2.0 will also include an Android emulator that is faster and features a new user interface. It isn’t included in today’s Canary release, but you can expect it to show up in a future Canary release.

The emulator will have a new toolbar for the most common emulator actions (instead of relying just on the command line), including volume control, screen rotation, taking screenshots, and window zooming. You’ll also be able to drag and drop APKs onto the emulator window directly, and rescale the window by just dragging the corner. Last but not least, Cuthbertson promised that full keyboard controls are on the way. Android Studio is also getting a GPU profiler. The tool will make it easy to profile your code: You can see details about the GL State and Commands, record entire sessions, and even walk through the GL Framebuffer and Textures as your app is running OpenGL ES code.

To take advantage, you’ll have to download the GPU Debugging Tools package from the Android Studio SDK Manager. But again, this is coming in a future Canary release.

Google wouldn’t say when it expects to release Android Studio 2.0 in the stable channel. That said, we’re betting it will be ready in time for the company’s I/O developer conference next year.