Throughout its life, Heroes of the Storm has had to deal with its heroes being compared to the ones in competing releases. While many of the game’s hero designs are brand new, several have come from the original Dota mod for WarCraft III, which both Dota 2 and League of Legends used as inspiration. But Cho’Gall, a new hero added last Tuesday, features a design completely new to the multiplayer-online-battle-arena genre.

As GamesBeat discussed in our interview with Blizzard Entertainment designer Kent-Erik Hagman, Cho’Gall actually consists of two heroes (or heads) in one body. Cho controls movement while Gall deals most of the damage. Each has a unique set of abilities (including separate Heroic abilities) but share one skill. Cho must throw out his Rune Bomb like a bowling ball before Gall can use Runic Blast to detonate it.

Here’s what I discovered about how this dopey two-headed ogre plays. 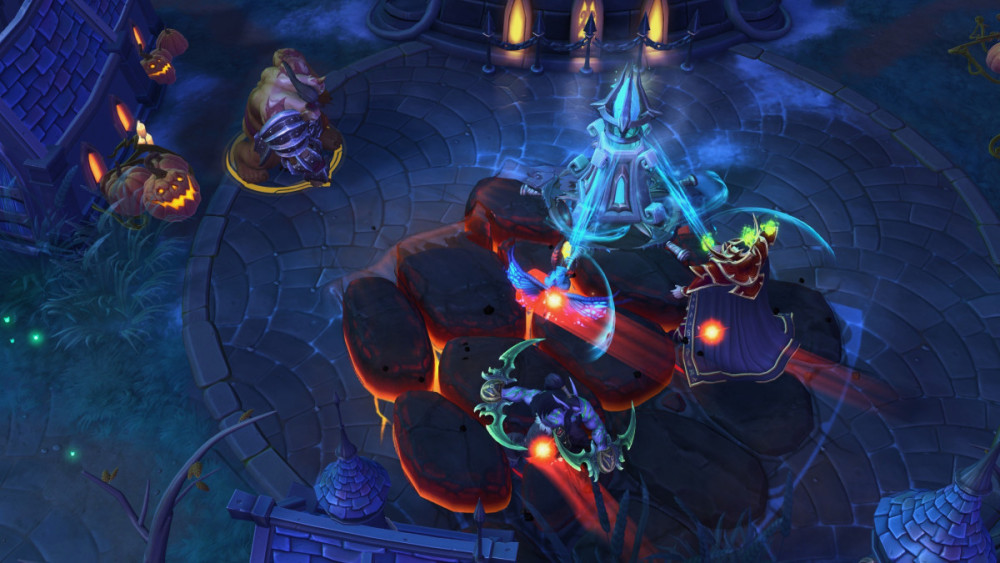 Above: Cho’s Heroic ability, Upheaval, uses molten rocks to drag enemies toward him.

Working together in silence

After playing several matches as both Cho and Gall, I’m surprised at how little verbal coordination the hero actually requires. Besides the Rune Ball/Runic Blast combo, most of the duo’s skills work independently and tend to have clear signifiers as to how the other head can use them to set up combos.

One of Gall’s Heroic abilities, Twisting Nether, slows enemies in an area, then explodes a few seconds later. This goes well with Cho’s Upheaval, which, after a short delay, drags enemies toward him, putting them in prime Twisting Nether range. Because both attacks have a delay before they go off, Cho and Gall both have enough time to know which skill to use as a follow-up without having to say a word.

As Cho, getting the jump on someone and melting them down as they flee never got old. You have the damage output of two heroes (perhaps more), and I felt unstoppable. Gall took a bit more getting used to since I had to focus purely on dealing damage, and seeing someone move my hero for me felt strange at first. But I only had to cast spells instead of worrying about proper positioning during fights, so I ended up having some lighthearted, carefree fun. Gall gets to deal a ton of damage while blaming all the poor decisions on Cho.

Of course, we don’t know what he’s capable of or how he’ll fare in high-tier ranked games, where teams can’t pick him first or last. He can quickly overwhelm entire teams and might have his abilities scaled down in the next patch, but I don’t think the developers will nerf him too much. Sure, he has more health and can deal more damage than just about any other hero in the game, but that’s only if you pit him against one other opponent. Cho’Gall takes up two slots on a team, so his real strength comes from setting up two-versus-one scenarios without having to coordinate and from never getting caught out alone. 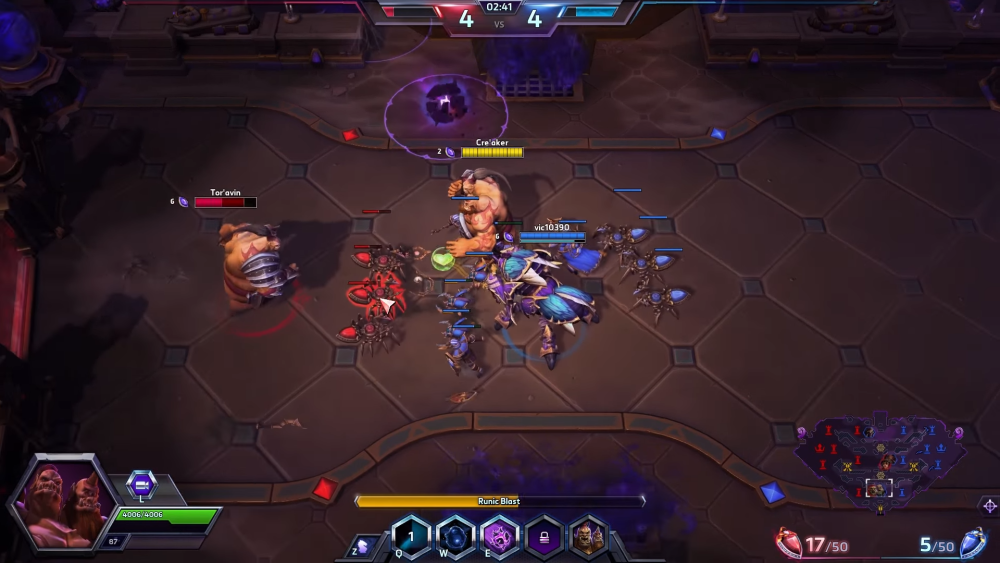 Above: When Cho throws out the Rune Bomb, a timer will appear for Gall to detonate it with Runic Blast.

I’m not so worried about his strength as a hero as I am his potential drop off in popularity. You can’t select Cho or Gall and head into matchmaking alone to find your other head. This won’t be a problem for people who queue for the game with their friends regularly, but I tend to play this game by myself most of the time. So, in order to get enough matches in for this article, I had to hit up friends and family to play with me. I even delved into no man’s land — the Heroes of the Storm in-game chat channel — to find teammates.

As part of the new Buddy Brawl event, everyone who attended BlizzCon and a few lucky random people from the general player base received the hero for free. Everyone else who wants to unlock him for free has to win two games with someone who already has the hero.

I did help other players unlock Cho’Gall after seeking help myself, and I appreciate turning the introduction of a hero into a free-giveaway event. But, I don’t see why I couldn’t just queue solo as Cho and have the game find me a Gall. Maybe allowing Chos or Galls to queue solo would require a change to the matchmaking system, but as of now, if I’m looking through the list of heroes to see who I’d like to play with on a whim, I’m likely to avoid Cho’Gall because of the extra work it’d take to use him.

I may not agree with that one decision, but make no mistake, Cho’Gall represents what makes Heroes of the Storm so different from every other MOBA — the persistence to upend everything about the genre. So, I hope this isn’t the last crazy trick Heroes of the Storm has up its sleeve because it needs more of this — heroes that employ new and exciting concepts, which make the game harder to compare to its competition.