It’s been 25 years since the Super Famicom — better known to us Westerners as the Super Nintendo, or SNES — launched to long lines and countrywide sell-outs in Japan. While the console enjoyed a healthy dominance in its homeland, it was a participant in an incredibly fierce marketing battle against Sega abroad — the story of which has been turned into a hit book titled Console Wars and an upcoming movie of the same title.

A lot happened during the 16-bit generation, and the emergence of real competition in the arena kept Nintendo on its toes. To counter the increasing threat that Sega’s Genesis hardware posed, Nintendo made a lot of strategic moves — some very smart, and some with absolutely dire consequences for the legendary company. 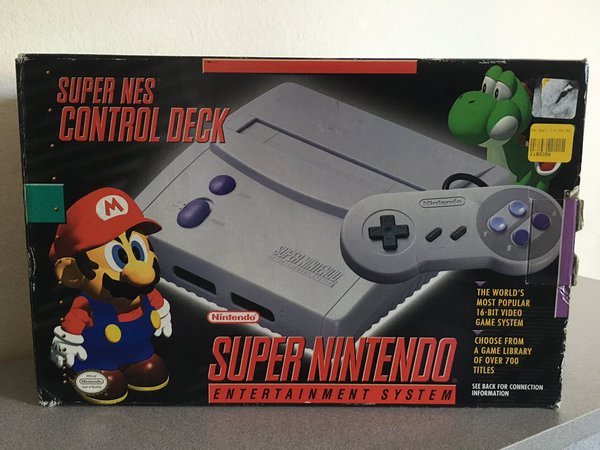 Above: A later reissue of the SNES hardware with a redesigned case.

One of the key areas in which Nintendo suffered was competitive pricing. The Genesis was cheaper than the SNES when the system launched, and throughout the life span of the two consoles, Genesis games were also typically cheaper by 10 to 20 dollars. (This author can attest that this was a key factor in her choice of which console to buy.) What could Nintendo do to make its software offerings have better value to consumers at retail? The answer was shockingly obvious: Give them several games for the price of one.

Super Mario All-Stars was an enhanced repackaging of four Mario games from the original Nintendo Entertainment System (NES) era, including one that had not been released outside of Japan. The graphics and sound were updated to meet modern standards, and other features, such as a battery-backed save function, enabled play sessions to be split up.

In many ways, Super Mario All-Stars pioneered the idea of retro compilations, offering a bunch of games that were already considered classics in a nicely redone, value-added package. Nintendo also offered All-Stars as a mail-in bonus to people purchasing SNES hardware, effectively giving four extra free games to people who purchased the console and making it look to consumers like it had a better value than the competition.

Lesson learned: Looking at your library of past hits and offering them in a value-oriented package can work well to win over consumers.

Mario Paint wasn’t the sort of game that would seem like a megahit in the game market of 1992 — in fact, it wasn’t really a “game” in the traditional sense. The software, which came bundled with the SNES mouse controller, was a creativity suite that enabled users to create digital artwork, compose music, and combine these to create rudimentary animated clips. 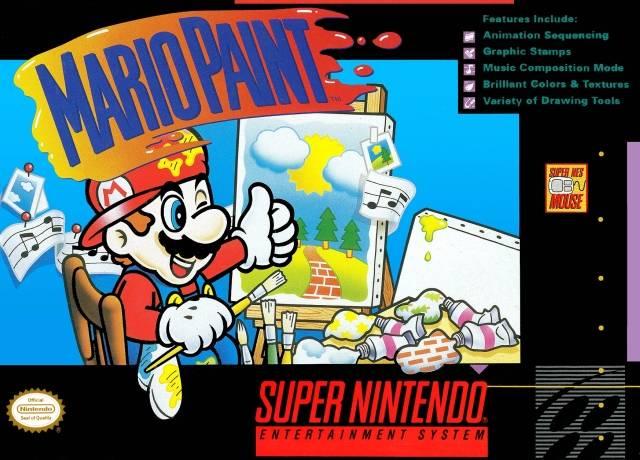 Above: Mario Paint was one of Nintendo’s first successful forays into non-traditional game software.

While PCs at the time had more robust creative software, they were also much more expensive and less common, making Mario Paint’s lower-priced creativity package considerably more appealing and accessible to the average consumer. The charming, engaging interface of Mario Paint also made the act of creating things enjoyable — many of the ideas from Mario Paint’s interface are still present in modern Nintendo efforts like Super Mario Maker.

Many budding creative types spent a great deal of time playing around with the functionality that Mario Paint offered, and several beloved creators, such as the Brothers Chaps of Homestar Runner fame, have described the time they spent with Mario Paint as an inspiration for their future work. Nintendo has since found success with other non-traditional software endeavors like Wii Fit and Tomodachi Life.

Lesson learned: Not every hit software release is a “traditional” game — thinking outside the box can appeal to different types of players and open new markets.

Early SNES sales suffered in the wake of Sonic the Hedgehog, a Genesis exclusive that was shifted to be a pack-in with the cheaper console around that time. Up until this point, Nintendo had enjoyed extreme market dominance in North America, and seeing another console encroach on its space with exclusive software made the company look both internally and externally for ways to fight back.

The first major exclusive SNES game came out about nine months after the system’s initial launch. Capcom’s Street Fighter 2 was a megahit in arcades, and at the time, a home port was only available on the SNES. Gamers eager to play a re-creation in the comfort of their homes bought the SNES solely on the strength of SF2’s must-have quality. Though later versions of the game eventually came to the Genesis as well, it’s safe to say that Street Fighter 2’s then-exclusive status played a huge part in getting the Super Nintendo into homes.

Later offerings, like the technically impressive Star Fox, also helped make the SNES stronger against its competitors. In 1994, Rare’s Donkey Kong Country wowed critics and audiences alike with its prerendered CGI visuals and is often credited with helping the Super Nintendo finally pass the Genesis in lifetime sales. By offering consumers a compelling reason to own a SNES, Nintendo managed to fight back against one of its fiercest competitors.

Lesson learned: Hardware alone isn’t going to inspire sales — you need great games, both first- and third-party, to offer reasons to own one console over another. 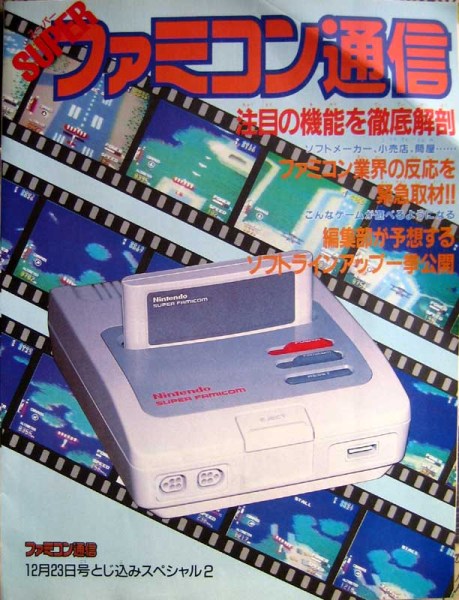 Above: An early prototype of the Super Famicom, as pictured on an old issue of Famitsu magazine.

One of the biggest deficiencies of the SNES was the Ricoh 5A22 processor, which clocked in at a meager 3.58 mHz top speed. (The 68000 processor of the Genesis, meanwhile, ran at more than double the clock speed.) Despite all the other neat bells and whistles on the Super Nintendo, the clock speed hindered things greatly — a problem Sega was eager to mock in its advertising. A well-circulated rumor is that early SNES hardware had an additional DSP-1 chip onboard to help aid the sluggish CPU, but it was removed in a cost-cutting measure – a move that hamstrung development of launch title Pilotwings, which was developed to use this chip.

Instead, Nintendo designed the console to enable use of enhancement chips — like the aforementioned DSP-1 — on cartridges to create better graphical effects and support additional processing power. A showcase of this was the hit SNES exclusive Star Fox, one of the first consumer-level games to feature 3D polygon-rendered visuals in a cartridge housing the “Super FX chip” — an additional onboard RISC CPU.

The problem, however, was that these chips were costly. Even though Nintendo later made the DSP-1 and Super FX chip available to third parties, few opted to use the expensive additional hardware. In fact, only a handful of developers opted to use additional enhancement chips at all. Cartridge sales were already risky business, with orders needing to be placed well in advance and with slim profit margins that additional chips would take another bite of. Many developers decided to simply deal with the headache of the slow CPU — or just not do SNES development at all.

Lesson learned: Don’t expect third parties to shoulder the burden of your hardware’s deficiencies. (It could be argued that this is a lesson Nintendo still needs to learn.)

Playing it too safe

Nintendo of America established an extremely restrictive set of rules on in-game content from the beginning of the NES era. Among the many regulations were mandates against the depictions of particularly graphic violence. Arguments over Nintendo’s staunch position on game content came to a head with the release of Mortal Kombat in 1993. While the notoriously gory arcade game came to Sega consoles with blood intact, Nintendo insisted on replacing the blood with “sweat” and removing several of the game’s finishing moves. Fans were not amused, and Nintendo immediately gained a reputation for watered-down kiddie garbage.

While Nintendo tried to use this to gain appeal with parents buying games for children — even making store displays and pamphlets extolling their commitment to games being family-friendly — the truth was that, even then, the average age of game players was creeping upward, and they resented “sanitized” content. After sales and company image suffered, Nintendo relented by letting games like Mortal Kombat II go on sale with their controversial content intact, but with warning labels attached. Eventually, Nintendo joined in on the industry-wide ESRB rating system that’s still in place today. 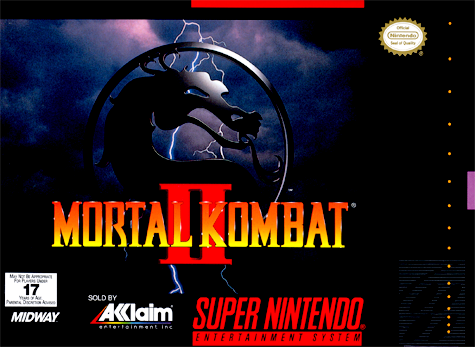 Lesson learned: Sticking to “safe” content and practices doesn’t always pay off. Sometimes you need to follow current market trends — or create new ones — even if it means courting controversy.

Sega and NEC (makers of the PC Engine console series) both offered console add-ons with CD-ROM functionality, enabling more storage capacity, better audio, and full-motion video playback. Nintendo was eager to hop in on the CD-ROM bandwagon and eventually forged a deal with Sony, which had developed the SNES sound DSP, to create a CD-ROM add-on for Nintendo’s console. The deal allowed Sony to market a combination SNES and CD-ROM system under their own name, the PlayStation. (A semi-working prototype of this system found recently made headlines not long ago.)

But even before the SNES released in North America, Nintendo was unhappy with the arrangement. Sony had more control over the CD-ROM software and marketing than they felt comfortable with. At the same CES trade show where Sony announced its work on the SNES CD-ROM, Nintendo announced it was dumping Sony and working with competitor Phillips on a SNES CD-ROM instead. While Nintendo tried to appease Sony by offering the opportunity to produce Sony-branded, SNES-compatible consoles, the resentment and anger at the public snub drove Sony to re-create the PlayStation as a standalone, 32-bit console. 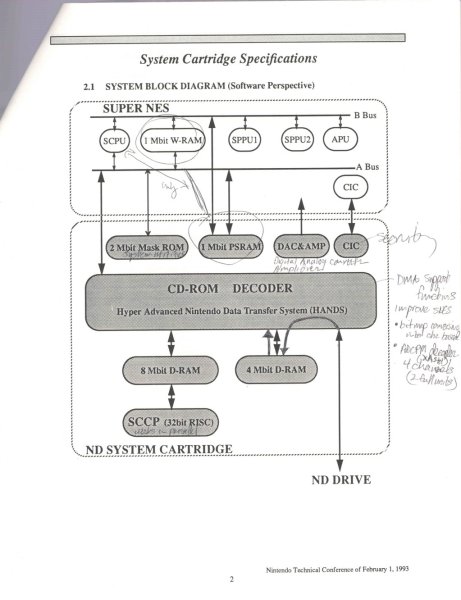 Above: Circa 1993 documentation of the unreleased Phillips/Nintendo SNES CD add-on hardware.

In the end, the Phillips SNES CD deal didn’t pan out, either. (The residual licensing agreements from the Phillips deal also resulted in the worst Mario and Zelda games in existence, but that’s another story entirely.) Betraying a partner over a few less favorable contract clauses cost Nintendo massively as the PlayStation brand dominated the industry in the late 1990s and early 2000s.

Lesson learned: Your business partners are valuable. Treat them well because if you wreck the relationship, it could have far-reaching consequences.