Making it easier to play with friends in Legion 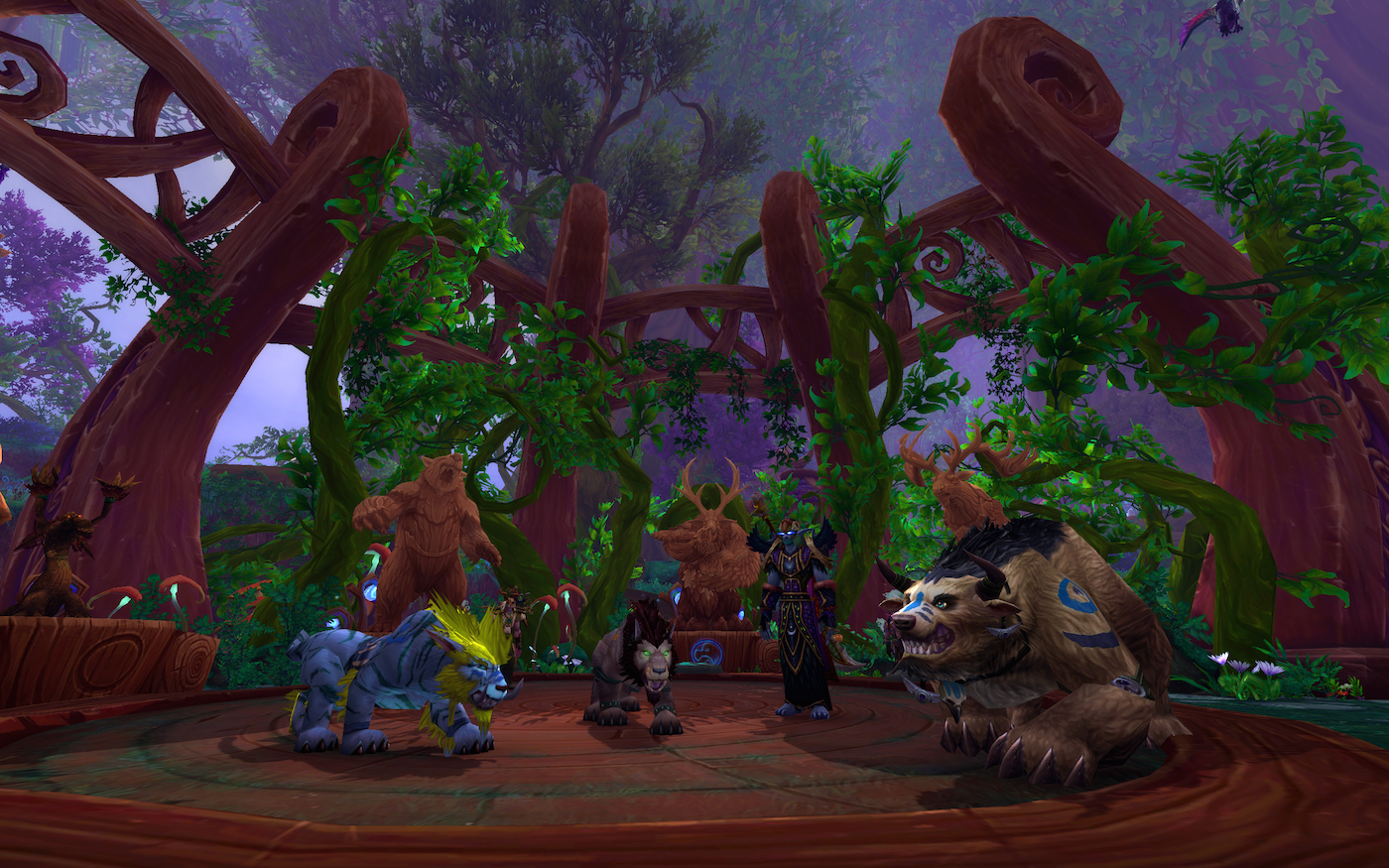 Above: Druids hang out in one of the new class halls that are part of the World of Warcraft: Legion expansion.

The upcoming Legion expansion introduces a number of substantial changes to Warcraft in-game systems, with an eye toward making it more fun to play — and easier to play with buddies who don’t have an identical schedule.

“One of the big things about that is the player agency we give to players to choose,” Brack said. One of those systems is a dynamic level system, where to players, monsters in the game’s zones appear to be the same level as their characters. That allows players to more easily group with friends who aren’t the same level they are.

That’ll give Legion players five zones to choose from, essentially, allowing players to join their friends at any point in the leveling process.

The idea came from the pre-expansion events the company was planning for Legion, he said. They wanted players at all levels to be able to fight in the demon invasions that form the core of the pre-expansion festivities, but they didn’t want lower level players to be annihilated by high-level enemies.

“We’re doing some work because we want this to feel cool for level 1 people as well as level 100 people,” he said. “We did some work and said hey, we think we can extend this to a little bit further on. That was the original genesis of that idea.”

Other big changes to come

Above: Warlock PvP gear from the World of Warcraft: Legion expansion.

Brack outlined several other major changes, most of which Blizzard announced during the panels recently at its BlizzCon fan convention. One was a new progression PvP system, which will have talents and separate progression for those interested in battlegrounds and arenas.

“That’s not something we’ve done in a very long time: PvP-specific talents,” he said. “We’ve had talents that were primarily for PvP, but this is a very different philosophy, that no, this talent actually is for PvP and does not do anything in PvE.”

Professions are being completely revamped, and crafters will enjoy quests, levels of proficiency for each recipe, followers who can assist them with their professions, and other new features.

“You recruit a guy to help work with you on your professions. There are different things you can do to focus on your professions on a daily basis,” Brack said. “We’ve got more designers focused on crafting specifically than we ever have in the history of WoW — that’s something we’re doubling down on in terms of making that a more-integral part of the experience.”

The company is also working on better timing for smaller patches that bring new content, keeping it coming at a more-steady rate, he said.

“We’ve experimented with different structures to let people deliver smaller patches and not affect the overall cadence of the next expansion coming out,” he said, giving an example of current patch 6.2.3, which included the return of valor points to upgrade gear, a new set of dungeons for the game’s Timewalking system, and a new moose mount available for killing the game’s end boss on heroic difficulty or better. “It’s got a lot of stuff to make people excited.” 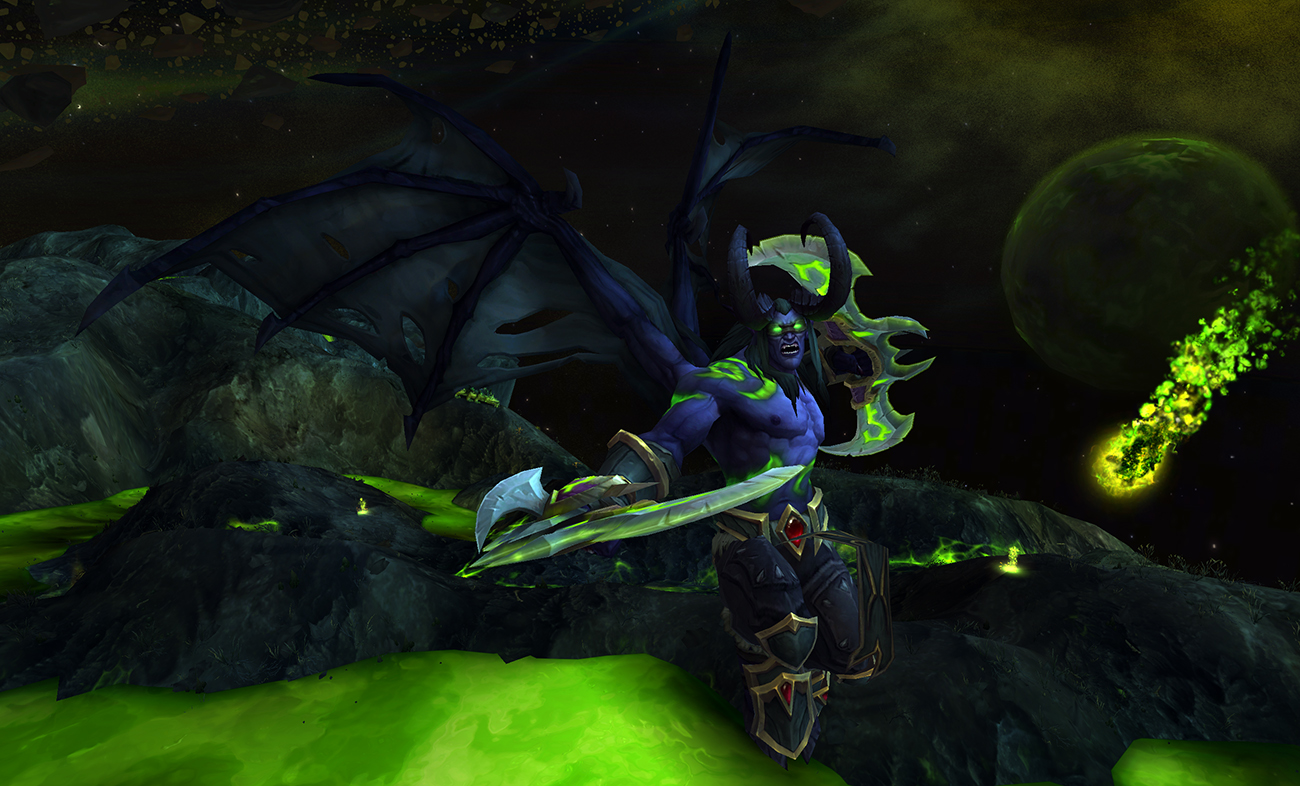 Above: A demon hunter on the attack in the new World of Warcraft: Legion expansion.

That said, the focus of WoW’s developers is on cool new content, not just bringing in new or returning subscribers, he said.

“The team itself can’t spend a huge amount of energy focusing on, how can I get 50,000 subscribers out of this next quest that I’m going to do? It would be a terrible, terrible job,” Brack said. “This raid boss has got to retain people for three months. You just can’t operate in that way.”

Blizzard is listening to its gamers, he said, and combining that with the data they garner from what players do in game.

The company is more committed to Warcraft than it’s ever been, he said.

“The team is larger than it’s ever been in the history of World of Warcraft. We’ve got about 250 people on the team,” he said. “The team is huge. We want to do more and we want to do it faster.”

That includes expansions. Interviews in years past speculated about the idea of shipping an expansion a year, but Brack’s chuckle suggests he’s not expecting to see that anytime soon.

“One of the things we’ve been pretty open about is this idea of wanting to ship expansions faster, being able to decrease the amount of time,” he said. “We’ve had cases where after the last content patch, it was a year until the expansion comes out. That feels like an eternity. I think people are ready for the next thing far before we’re actually able to deliver it.”

So is he ready to talk about what’s next after Legion, then? Not a chance. That aim of reducing expansion time is still very much a work in progress.

“I don’t know what the schedule for that is yet — we don’t even know what that is,” Brack said. “We’re focused on trying to get Legion done. But if you look at the time period when Warlords shipped and when we’ve announced when Legion is going to ship, we’re nowhere close to one year. We’re very far from one year.”