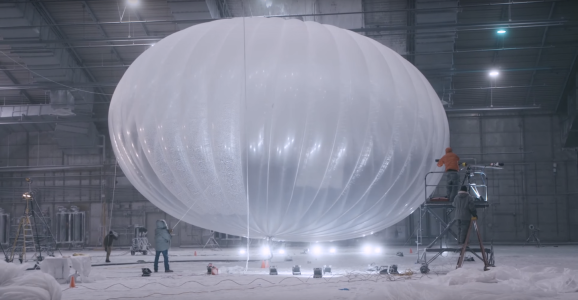 An Alphabet Project Loon balloon being tested in a Florida laboratory.

Alphabet, Google’s recently formed parent company, is making a bunch of bets. One of them is a project for broadcasting Internet to people who ordinarily wouldn’t get it — using big, fluffy balloons.

Googlers — no wait, uh, Alphabeters? — are quickly getting better at manufacturing these balloons and making them more effectively withstand conditions in the stratosphere. They cruise at an altitude of 65,000 feet, and up there it’s -76 degrees Fahrenheit.

They’ve found a place in Florida, of all places, where they can simulate these conditions — the McKinley Climatic Laboratory on Eglin Air Force Base — as manufacturing lead Mahesh Krishnaswamy explained in a new video posted today on the Project Loon Google+ page. Check out the video below:

Google first unveiled Project Loon in 2013 and announced an expansion into Indonesia in partnership with multiple telecommunications companies last month.

Meanwhile, Facebook has its own program to beam down Internet connections from a drone.