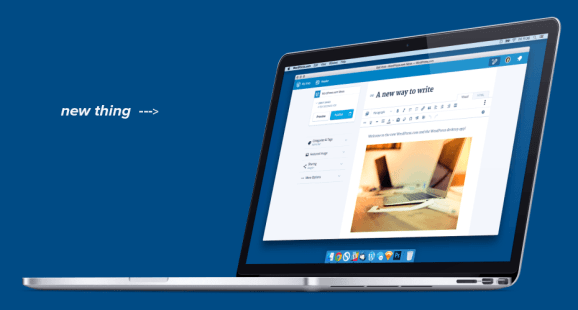 Yesterday Automattic, the company behind WordPress, revamped and open-sourced its biggest asset: WordPress.com.

It’s a massive change for WordPress, which claims to already power about 25 percent of the Web. So we sat down, metaphorically, with WordPress creator and Automattic CEO Matt Mullenweg to learn more. Here’s our interview, trimmed of my “ums” and “likes” for clarity.

VentureBeat: So would you mind dumbing down the update?

Matt Mullenweg: For users, it basically means that there’s a new, fast WordPress. And if you’re on a Mac, you can get this awesome app you can put on your desktop.

For developers, we sort of redid 13 years of work in about 20 months and instead of PHP, we wrote the whole thing in JavaScript.

MM: So I think what might happen is that the technology that drives the server side of WordPress and what drives the client side can diverge. Again, this is really up to the community, so we’ll see where it takes us. This thing we released has only been out there one day. Maybe someone will make something much better? But PHP is still really fantastic for server-side stuff, so it drives the API fantastically.

But for the client-side experience, I think this Calypso approach is going to be both better for users immediately and also developers will be able to iterate faster.

VB: I’m looking through comments on Twitter as well. I was kind of expecting people to freak out. Do you expect pushback?

MM: I’ll say as well that learning new things is scary. Personally I now have 13 years experience coding in PHP, and you kind of have to — if you’re learning a new language — you’re kind of back in that beginner phase which can be frustrating at first. I’m sure there will be some people who are sort of scared or worried about the change. It’s a very disruptive change. But the benefits are pretty huge. What’s on the other side is totally worth it.

I think the reason WordPress is still relevant 13 years later, which is almost unheard of for technology products, is that we’ve always been really honest with ourselves about what’s good and what’s bad.

VB: Another question that’s been asked on Twitter: Are you competing with Medium?

MM: We don’t see Medium as a direct competitor. I think some people might choose to write there versus writing on WordPress, but certainly this move was not started because of it. In fact the roots of it predate Medium. And also I think it’s a different scale. We’re very much north of a million people per week publishing using the current stuff. And I think we can grow that to many, many more with this new interface.

VB: Is Windows and Linux support coming soon? How important is the desktop?

MM: Desktop’s really important because laptops and desktops are still the best tools for blogging. iPads with their split screens are getting better but still, when you write, you do research and you open up a ton of tabs, you’re probably on a desktop.

What we’ve seen from initial data is that the folks who use the desktop app (maybe because it’s so much faster) are actually engaging at a higher rate than in the browser on desktop. So I’m very excited about both Windows and Linux. We don’t have a date to announce, but we’re not far from supporting Windows and Linux.

VB: This is a pretty well-organized push … Seems like everything was considered, but at the same time you say this was very risky. Is there anything you’re concerned about? Are you the most confident you’ve ever been in the future of what you’re doing?

MM: I have all of the feelings — all of the feels. The first feeling is probably pride. I’m very proud of the team because this was a big thing to pull off. I’m anxious, right? Because this is a new thing in the world. And we’re proud of it, but you know, usage is oxygen, and this is the first time most of the world is having this new experience. So that’s a little bit nerve-racking.

And the next feeling I have is probably “time to get back to work,” because there is so, so much left to do. Just in the next couple weeks, we’re launching more things for the remainder for the year. Our big once-a-year conference is coming up. This is a beginning, not an end. What Calypso allows us to do is to iterate on things much faster. But I think you’ll see, as a WordPress user, it will feel better and better every day.

In which @photomatt breaks his laptop screen on launch day. Except from interview (coming) which didn't make the cut pic.twitter.com/eZtWemcdns