MONTREAL — Contrary to what you might think, the creators of upcoming Star Wars games are not just waiting to get the scripts handed to them by the makers of the new episodes of Star Wars movies. The video games are not going to be carbon copies of the movie experiences.

Amy Hennig, creative director at Electronic Arts’ Visceral Games studio in Redwood City, Calif., and Jade Raymond, head of the new EA Motive studio in Montreal, are hoping to create interesting new experiences in the universe of the upcoming Disney/Lucasfilm Star Wars movies, the first of which, Star Wars: The Force Awakens, debuts on Dec. 18. EA’s Star Wars Battlefront multiplayer game is out now (Hennig and Raymond did not work on this game, which was created by EA’s DICE studio), but we haven’t heard much about the console games based on the new trilogy of films yet.

EA has the license to make Star Wars games based both on the new films and other parts of the Star Wars universe. And Hennig and Raymond say they’re working closely with the Lucasfilm creative teams and are carving out their own roles in an endeavor that many video game creators have to experience: how to create something that gamers will universally like without violating the creative rules laid down by movie makers for a franchise that was created for another medium.

Hennig has been working at EA for 18 months, and Raymond just started earlier this year. Their games won’t appear for some time, and they haven’t announced any details beyond the fact that they are both working on Star Wars games.

They spoke about the creative process during a fireside keynote session at the Montreal International Game Expo in Montreal last week. Jason Della Rocca, cofounder of the Execution Labs game accelerator in Montreal, moderated the talk with Hennig and Raymond. We also interviewed Raymond and Hennig in a separate discussion here.

Here’s an edited transcript of the discussion. 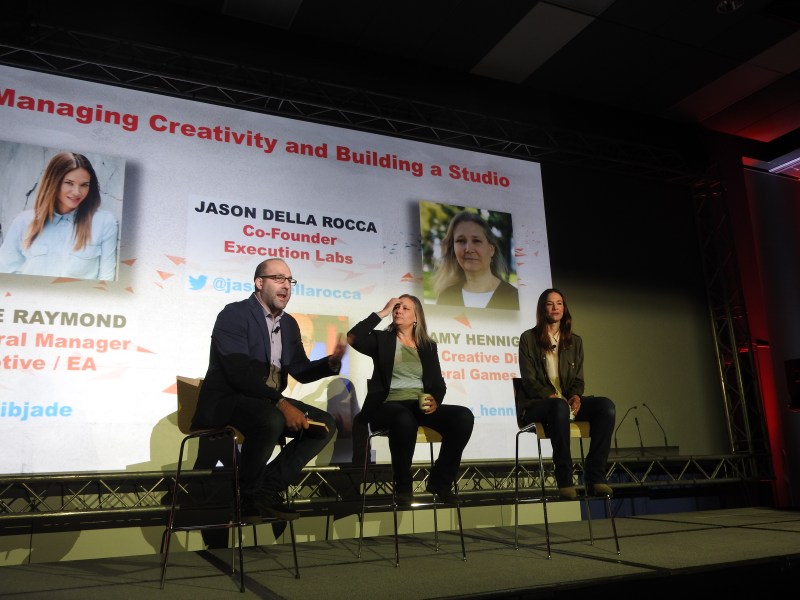 Jason Della Rocca: Whenever I think about creativity, the creative process, a lot of developers tend to think about the creativity, but not the process. Certainly going back a decade or two, as designers and developers, we didn’t even have a vocabulary to articulate what we were doing. We just did it from our gut, from intuition, from playing other people’s games and seeing people play our games. This notion of having a methodology of design or creativity, I would say, is a newish thing. Are you more of this intuition, gut-feel type of creator, or do you have a methodology or process?

Amy Hennig: Both, right? I’m an intuitive person, but folks in the audience that know me would probably agree that I’m a pretty anal-retentive person when it comes to analyzing stuff and trying to break it down. If you just tackle problems from one side, if you’re completely analytical, then there’s no spark of inspiration. It gives you a framework, but it doesn’t give you that lightbulb moment.

Della Rocca: You can’t sit down and say, “Now it’s time to be creative. Here is my 10-step process.”

Hennig: Unfortunately we do have to do that. Then I have a meeting an hour later and the wheels have just started turning. It’s challenging, being creative in a business environment.

Jade Raymond: I work with teams and I try to enable their creativity, get rid of their creative roadblocks. It’s less of a process about me being creative personally. There are a lot of things these days, as teams continue to get bigger and engines become more complex and the process around making games — as we become better at controlling our schedules and other things that are important, we also tend to sometimes take a step too far in a way that can impede creativity. It can get in the way of the individuals on the team.

Della Rocca: A step too far in terms of applying your processes?

Raymond: Yeah. Process is a tough thing. Whenever we make a game, we’re reinventing the wheel. That’s what’s so exciting about it. You’re not just reskinning something or slapping a new story in the same game mechanics. Every time you release a new game, you have to think about what’s new and what’s different.

We have to think the same way about processes. Depending on the game, depending on what you’re trying to build, and most important, depending on what’s preventing the team from being creative. When we’ve gotten those magical moments in a game, where something really special comes into it, it’s often not necessarily something that was on paper. Individual people have an idea and they’re able to bring it into the game. That’s the special touch. In some cases, more recently, we’ve been putting processes in place that can squash that.

Hennig: It comes back to business processes, right? Can we tick some boxes or something to make people comfortable with a process that is by nature uncomfortable? 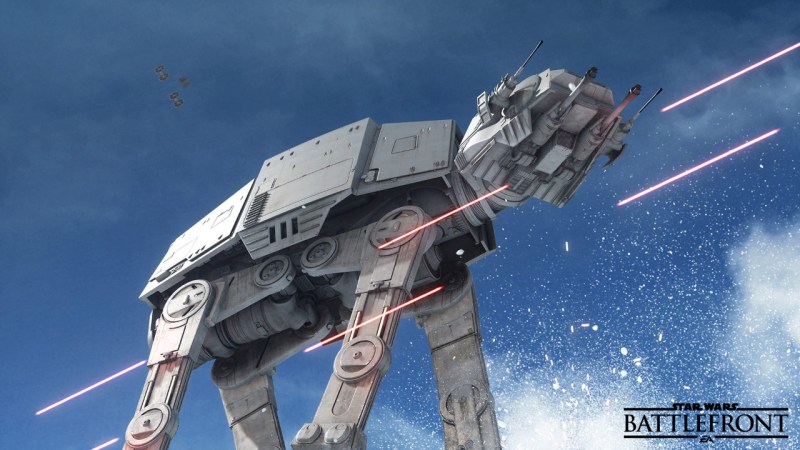 Della Rocca: As a creative director, I’m guessing you’ve worked with managers and bosses who served more as unblockers, like Jade is saying, versus people who are trying to put more processes in place.

Hennig: We’ve all had good and bad experiences with management. Sometimes there’s a necessary tension between a production role and a creative role. You don’t want either one to run rampant over the other. There should be a good supportive tension between the two.

It’s been interesting, in my career — I was at Electronic Arts early on in my time in the industry, then Crystal Dynamics, then Naughty Dog, and now back to EA. It’s been a journey across that whole spectrum. At Naughty Dog we didn’t have any managers per se. We often described the situation as organized chaos. It works, in a way, but the chaos part could be pretty difficult.

Della Rocca: Jane, how do you deal with organized chaos?

But there are all kinds of different things to consider. For example, the tools we give people. A lot of things take away creativity that we don’t really question. Does anyone ever feel creative when they’re sitting in a car in traffic trying to get somewhere? No. If you think about what a lot of developers struggle with day to day — waiting for builds, waiting for data, all this wait time — those kinds of things steal creativity too. You need to look at all kinds of things.

Raymond: If I were to distill something down to basics about ownership and empowering teams — creating a flat enough structure, so there aren’t a million layers of assistant to the assistant. That doesn’t work. The other thing is, how do you divide up what you’re trying to do in a game into small enough pieces such that smaller teams can have ownership and operate within the larger team?

Any time there’s one bottleneck, one person making all the decisions that everything has to funnel through, whether it’s a creative or a production decision, you’re choking up the team as far as their ability to take ownership. How do you look at what you’re trying to accomplish and divide that up around the team? That can lead both to creative ownership and the ability to actually deliver. 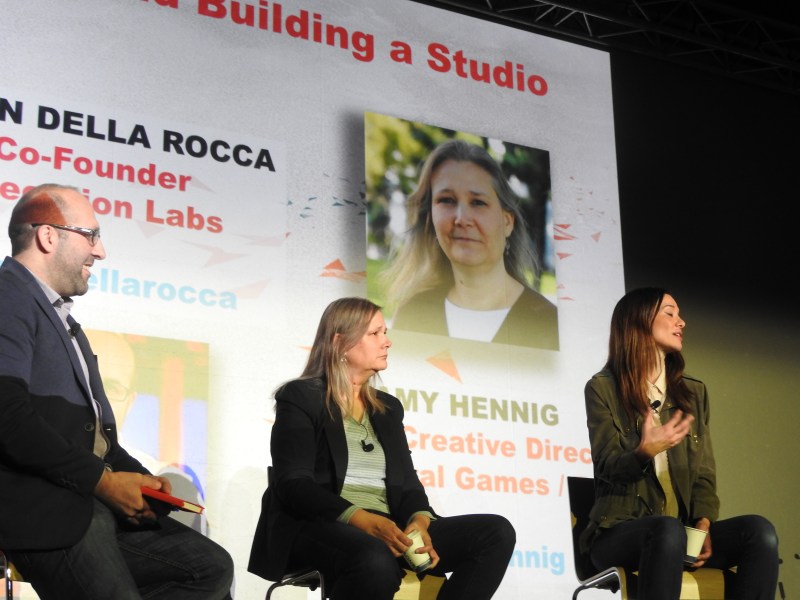 Above: Jason Della Rocca, Amy Hennig, and Jade Raymond talk about the creative process at MIGS 15.

Hennig: It’s a hard balance. You want to give people enough direction, give them the necessary constraints, so they understand the goal they’re trying to meet. The problem is that if you give them too much, they become dependent on it. They’re waiting on you for everything.

One of the things I’ve said a lot of times to people who aspire to a job like mine is a little warning. It’s actually not about getting more control. It’s about giving up control, the willingness to delegate ownership so people are invested in the project. Understand that what that means is it’s not always necessarily going to be your idea that comes through. If it’s someone else’s idea, and it’s just as good, then that’s better. The passion in the work comes through, as opposed to having everything authored from the top by some auteur.

Della Rocca: You’ve had great success in your job. Is there a sense of pressure now that comes from that? Does that hinder you in any way.

Hennig: It’s probably a razor-thin line. On one day I might be falling on one side of it in terms of becoming a bottleneck, and other days I might be able to put together enough information that I’m able to take the constraints off. You just keep correcting. But I find that people can be the most invested when you give them a problem to solve.

It’s the same thing as good game design, right? You don’t want to lead the player by the nose. You want to give them a problem and let them be creative in solving that problem. The same is true of the people on your team.