The iPad Pro is different from previous Apple tablets. It’s so big that it makes you wonder what you can do with it that wasn’t possible before. You wonder if it can be your new default computer.

But for entertainment, it’s great. For checking apps, it’s great. And for creating and lightly editing photos and videos, it’s great. You can even do a good bit of work with Google Docs and the Microsoft Office apps. For instance, I’m writing this review on it, and it’s going pretty great.

Although the screen is nearly as big as my MacBook Air, the iPad Pro is not running the same operating system. This is still a mobile operating system, and Apple has only started on the journey toward making it into a more desktop-like mobile device. Only some of my favorite keyboard shortcuts work. Command-F in Chrome? Nope. Command-Q to quit an app? Nope.

Split View, the iOS 9 feature that lets you divide your screen in two equal vertical sections, only works with some apps. And Apple’s optional Smart Keyboard doesn’t have a trackpad. The omission might not pop out right away, but when you think about it, it’s like being served a nice steak dinner with no utensils. Sure, you could pick up the steak and eat it with your hands, but a fork and knife would make the experience easier and more enjoyable. 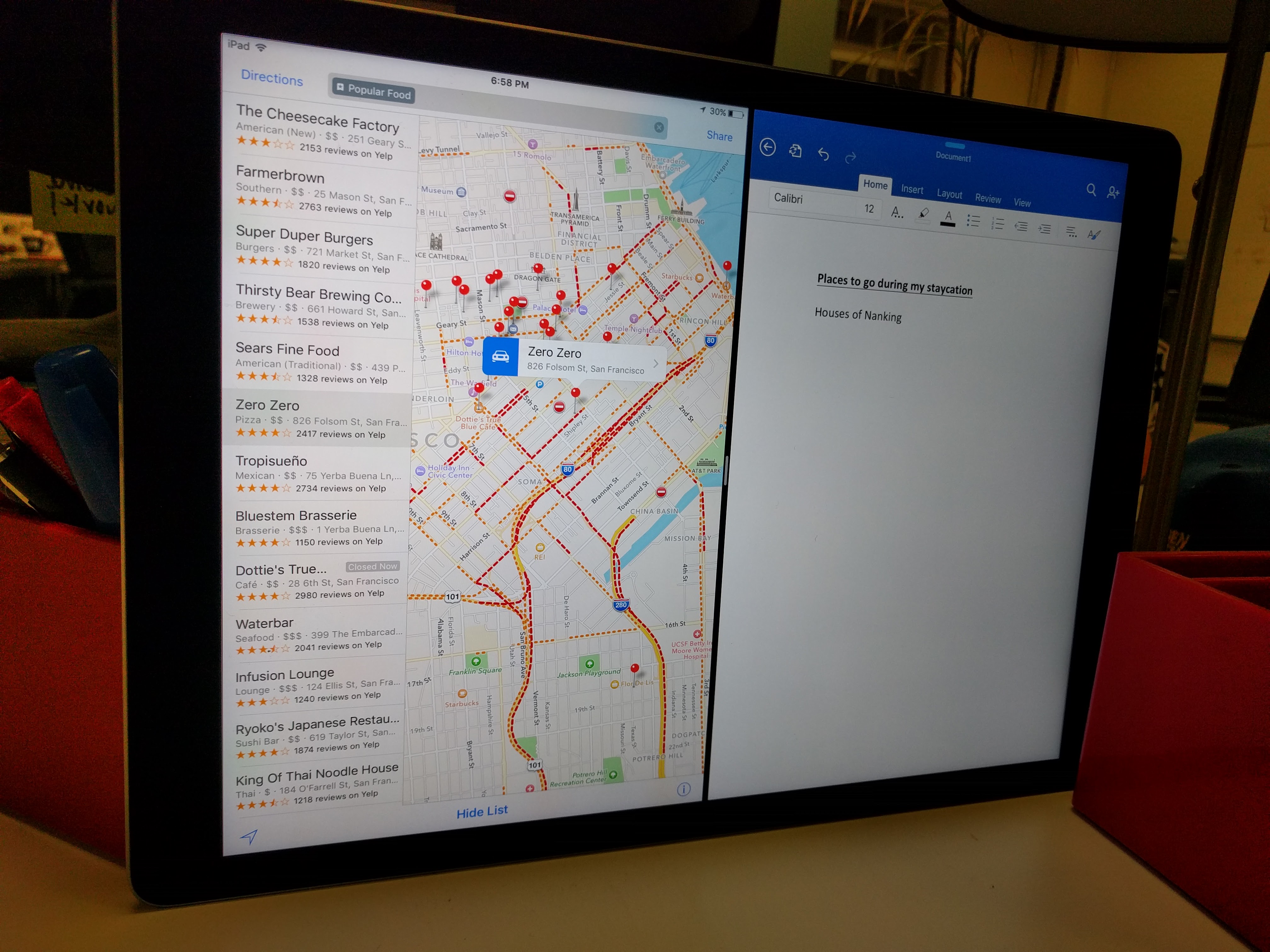 Above: Split View on the iPad Pro.

And so this device feels like a good start for Apple. Like the first iPod, it could be improved on. The buttons surrounding the wheel in the first version of the iPod were scrapped, and eventually even the wheel itself was dropped. The result was a much more fascinating device. The iPad Pro, hopefully, will evolve in a similarly positive way.

There’s a lot to like about the iPad Pro.

The 64-bit A9X chip and 4GB of RAM make the device responsive even when there’s input in two apps at once, even when multiple fingers are sending a considerable amount of input into one app. Minecraft Pocket Edition, for example, works very well on the device, better than on the recently released Nexus 5X. It might even look better than the desktop version I run on my MacBook. Now if only I could use my keyboard controls to play the game on the iPad Pro.

And of course, the screen is terrific. It gets the oohs and ahhs every time from people who see it for the first time, no matter what you’re doing. It’s larger and yet lighter than previous iPads. (Although it was not light enough to easily hold up in the air with one hand while, say, brushing my teeth. For that, a smaller iPad, like the Mini, would be a better choice.)

Games and movies and video calls look dazzling on the screen. Turn it up to full brightness in front of your face, and it’s like downing an espresso shot — it’s that startling.

Probably my favorite visual experience with it was Vrse, the 360-degree virtual reality app. Once you’ve downloaded a video in the app, you hit the play button and set the iPad Pro in landscape mode, and off you go into another world. As you move the tablet around, you see the scene from a different angle and hear different things more loudly depending on what you’re looking at. One could not pull this off with a MacBook. The effect on a smaller mobile device is not nearly as immersive. The only thing better is seeing it in a full virtual reality headset such as the Samsung Gear VR. 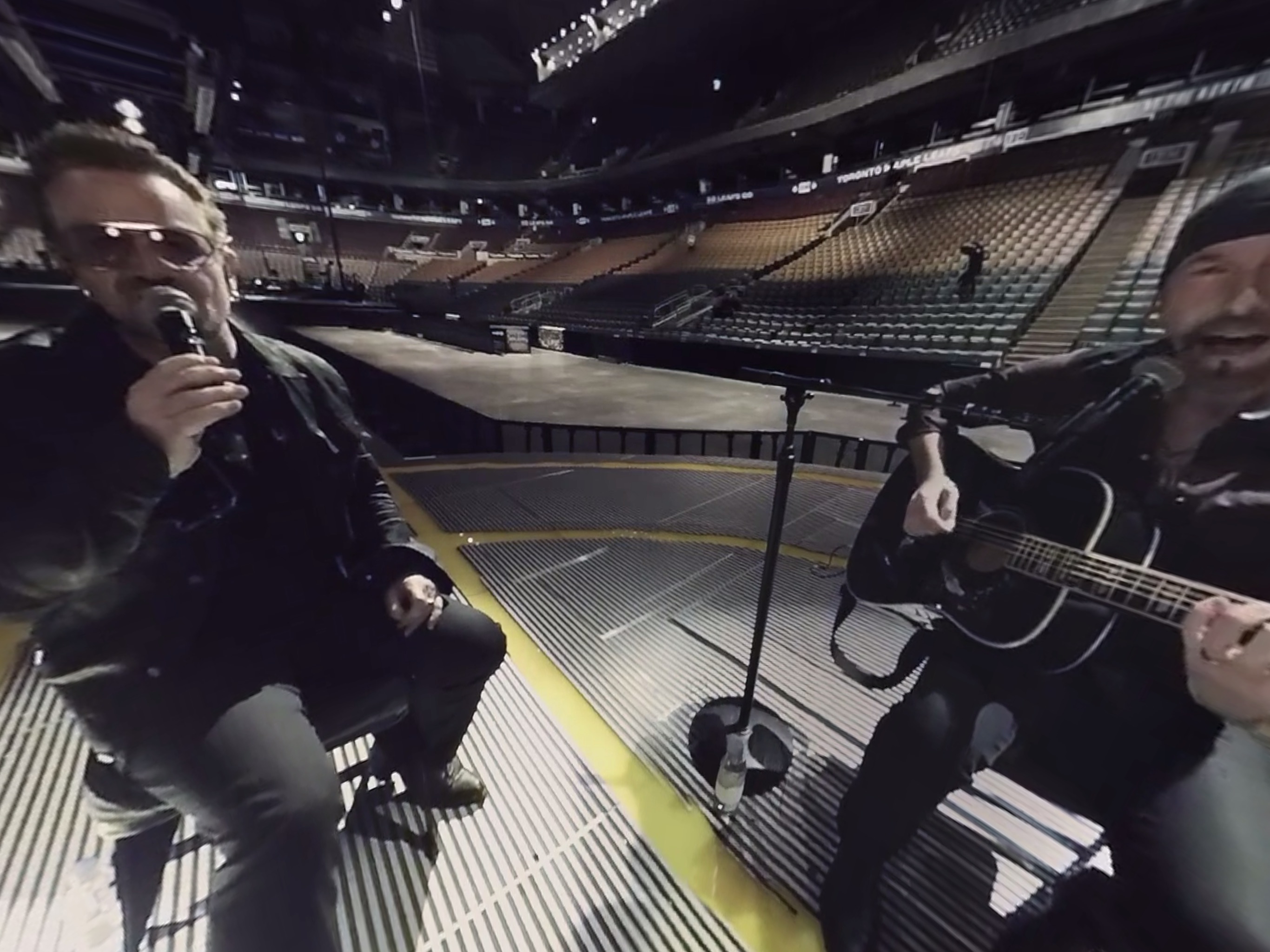 Above: A 360-degree video of a U2 performance in the Vrse app on the iPad Pro.

The Seene 3D photo sharing app was also a treat on the iPad Pro — as you move the device around, you can see an image from many angles. You just can’t do that on a desktop computer. It feels much more interactive than the same action with a smartphone or even a smaller tablet.

One Apple feature I’ve been excited about using on a regular basis is 3D Touch, which presents you with options after a long press on an app icon. Apple executives talked about the feature’s implementation on the iPhone 6S on the same day as the launch of the iPad Pro. You would think that Apple would be sure to ship an innovative feature like that on its biggest and most powerful iPad yet, but the feature is mysteriously missing. I can live without it, of course, but it would have been nice to play around with, so I can more quickly do what I want to do within apps.

Slow charging is a more significant issue with this iPad. If you’re using it while charging it, the percentage of its charge seems to sit tight and not go up. It’s frustrating. If you aren’t using the iPad Pro while charging it, things move more quickly, but a full charge takes more than two hours. Once it’s done charging, the battery fortunately lasts much longer than that. Apple advertises up to 10 hours of battery life with the Wi-Fi-only model I’ve been testing, and that sounds about right.

Owing to the device’s large 12.9-inch screen, the default virtual keyboard on the iPad Pro is without question an improvement over what you got on earlier iPads. But if you want to do work at normal speed, you will probably want to have an accompanying physical keyboard. Heck, the command key is missing from the virtual keyboard.

The problem is, Apple’s first-party Smart Keyboard, which attaches to the Pro’s three-dotted Smart Connector and can prop up the device at just a single angle, costs $169. That’s a lot, considering that the entry-level iPad Pro, with 32GB of storage, costs $799. People who like to sketch and draw and doodle and take handwritten notes may well be attracted to the Apple Pencil, but that costs $99. Add up all three of these products, and you’re looking at $1,067 before tax. That makes the package more expensive than the 11-inch MacBook Air ($899) and the 13-inch MacBook Air ($999). That’s staggering. It would be nice if the peripherals were thrown in, or at least less expensive. 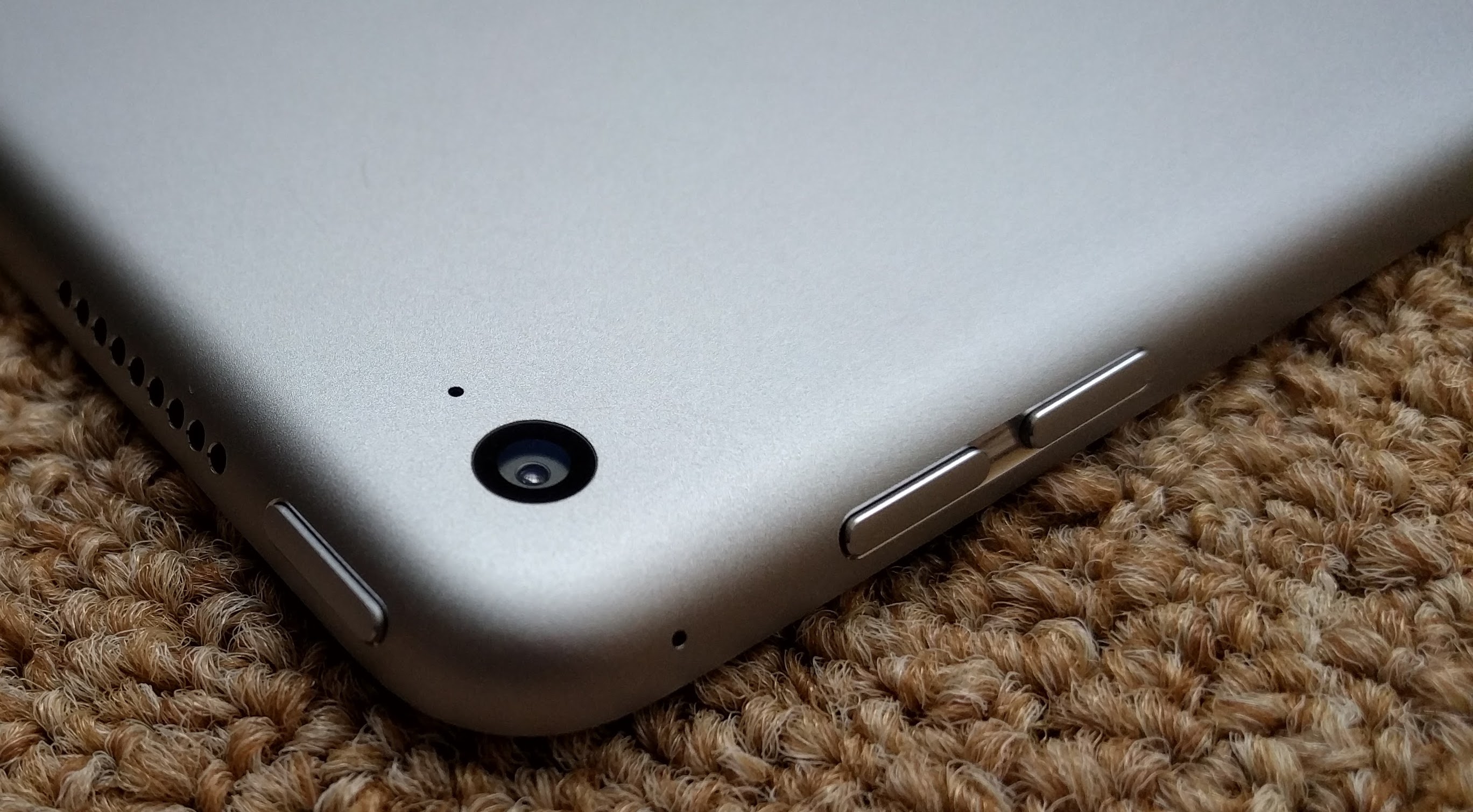 Above: The back camera on the iPad Pro.

The eight-megapixel rear-facing camera is not the best camera you’ll find on an iOS device — the 6s boasts 12 megapixels — and anyway, the device is just so large that it’s a little unwieldy for shooting lots of photos from different angles.

Oh, by the way, on launch day I couldn’t find the Apple Pencil or the Smart Keyboard in any brick-and-mortar Apple Store in the area. Ordering online would mean waiting four or five weeks before shipping. You would think Apple would have these slick products available at the same time as the iPad Pro itself, but that was not the case. Had they been available, I would have bought them, despite the sticker shock.

And even though the iPad Pro is a bigger version of an existing product, this feels like a completely new product if you’re looking at which apps are supporting it. A whole lot of apps can only be displayed on a fraction of the screen, and only in portrait mode at that — for example, Facebook’s Instagram, Twitter’s Vine, Google Calendar, and Snapchat. Microsoft iOS apps like Groove, Health, Invite, Office Lens, Send, Translator, Tossup, and Twist also fall into this camp. 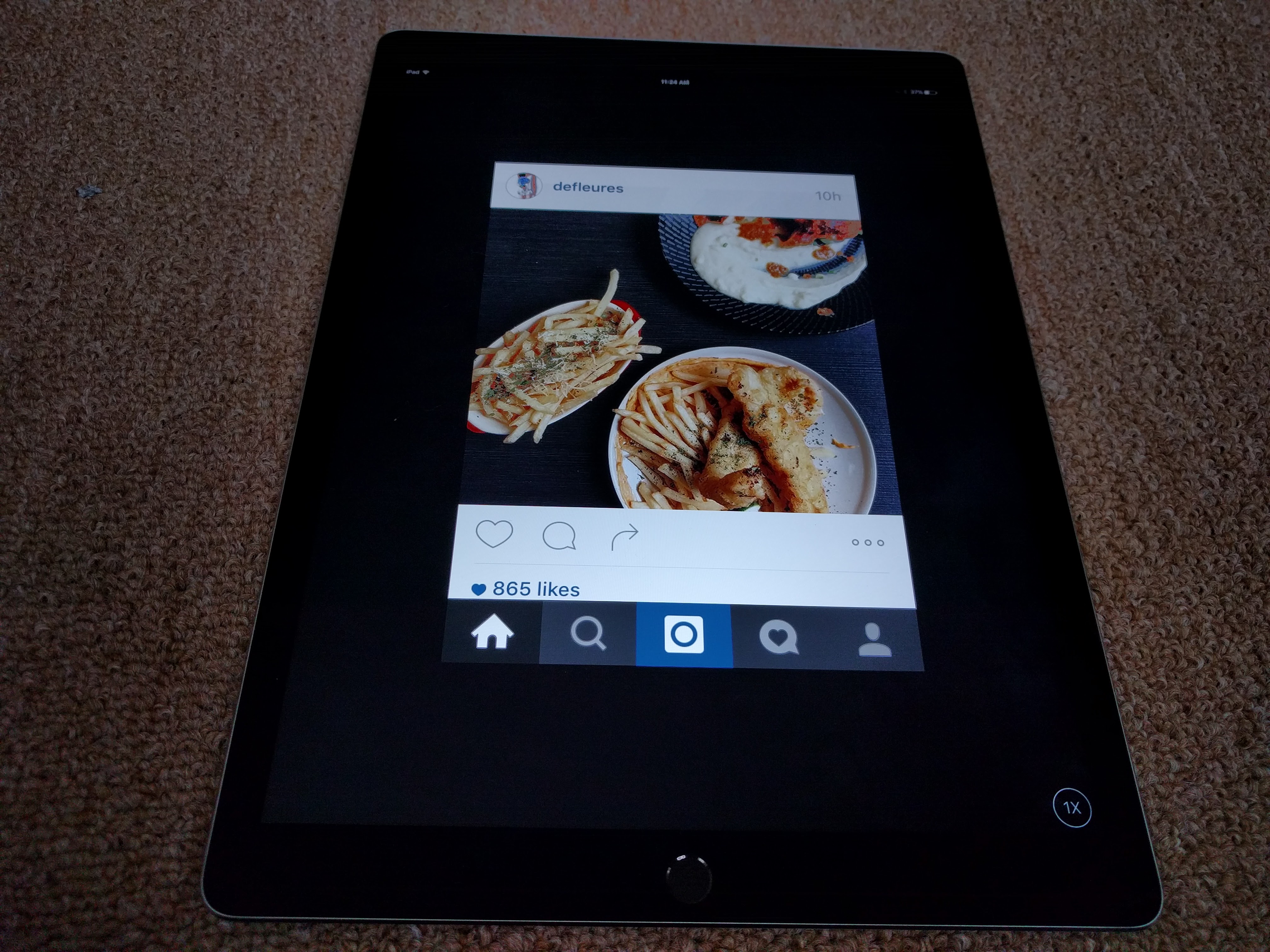 And one popular music-streaming app, Spotify, wouldn’t even work on the iPad Pro when the tablet first came out. It took about two weeks for Spotify to roll out a fix.

If you have a good laptop, you probably don’t need the iPad Pro, given its high price and its technical shortcomings. Sure, it’s impressive for an iPad, but that might not be a good enough reason to buy it.

With the iPad Pro, there are signs that Apple wants to offer consumers a mobile device that can replace a laptop. Microsoft pioneered this idea with the Surface, and Google earlier this year introduced the Pixel C. Now Apple has completed the triumvirate of mobile operating system companies buying into the desktop-class mobile device concept. Now that Apple is here, it’s fair to say that the iPad Pro is the most powerful iPad to date. People are excited about this device in a way that I haven’t seen since the introduction of the iPad in 2010.

If anything, the flaws in this device make the Surface, particularly the new Surface Book, look more desirable. Which is ironic considering the longstanding rift between iOS/Mac and Windows. 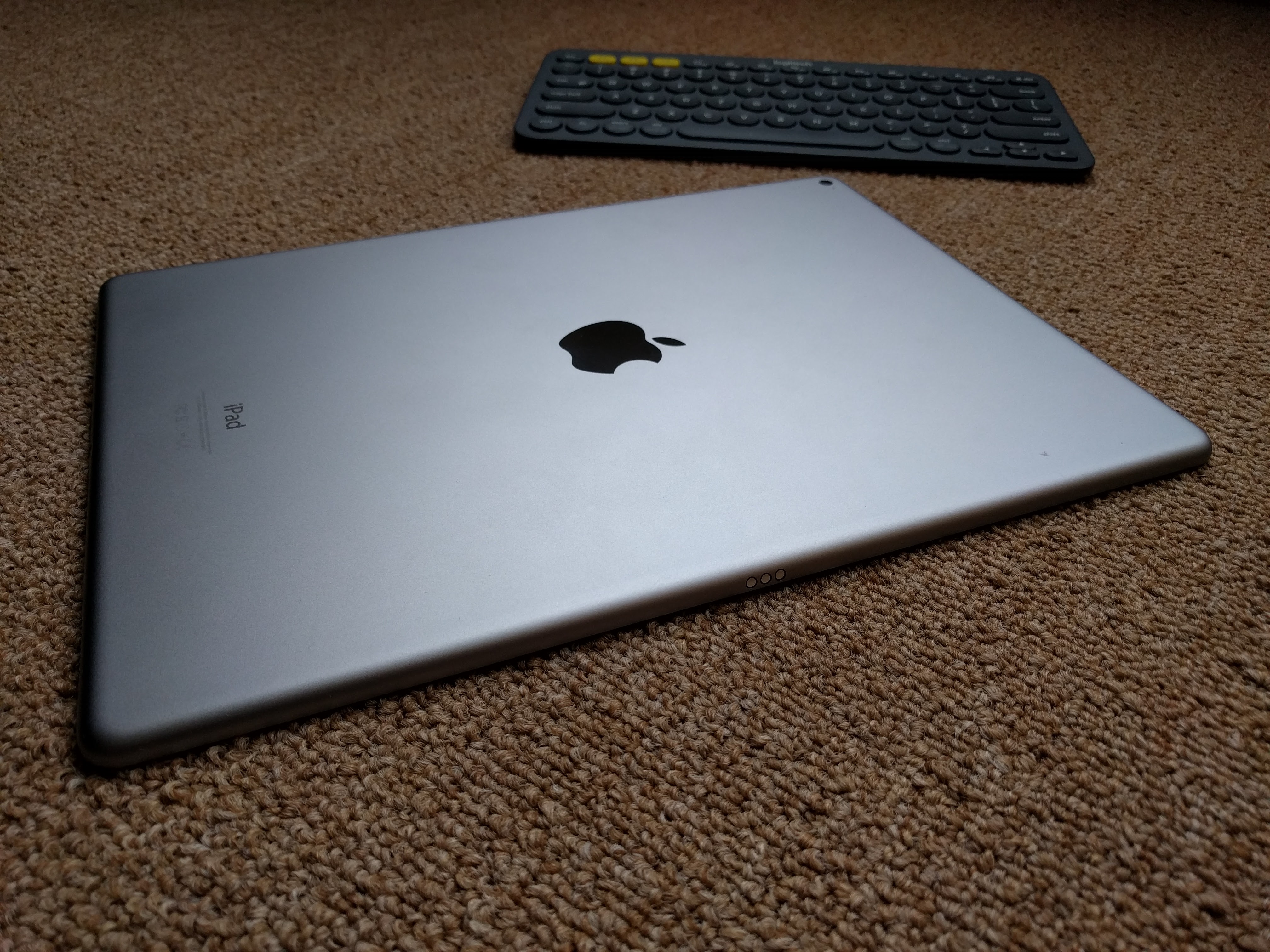 Above: The back of the iPad Pro in the foreground. In the background is the Logitech K380 Bluetooth keyboard, which I’ve been using with the iPad Pro.

Rather than buy this first take on a Pro spin on the iPad, it might be smarter to hold off until next year — or whenever there’s a version that can truly replace your laptop.

Hate to say it, but I’m returning this thing to the Apple Store.