Mozilla has released its annual financial report for 2014, revealing a revenue increase of less than 5 percent year-over-year, 90 percent of which came from Google and Yahoo. Every November, Mozilla releases its financial report for the previous year, but the 2014 version is a particularly complex one.

For the last five years, every time you input a query into Firefox’s search bar, Google made a little bit of money from AdSense ads. Last November, the organization signed a five-year deal with Yahoo, which went into effect at the end of 2014. A portion of the money, whether generated by Google or Yahoo, passes to Mozilla via a revenue-sharing deal. 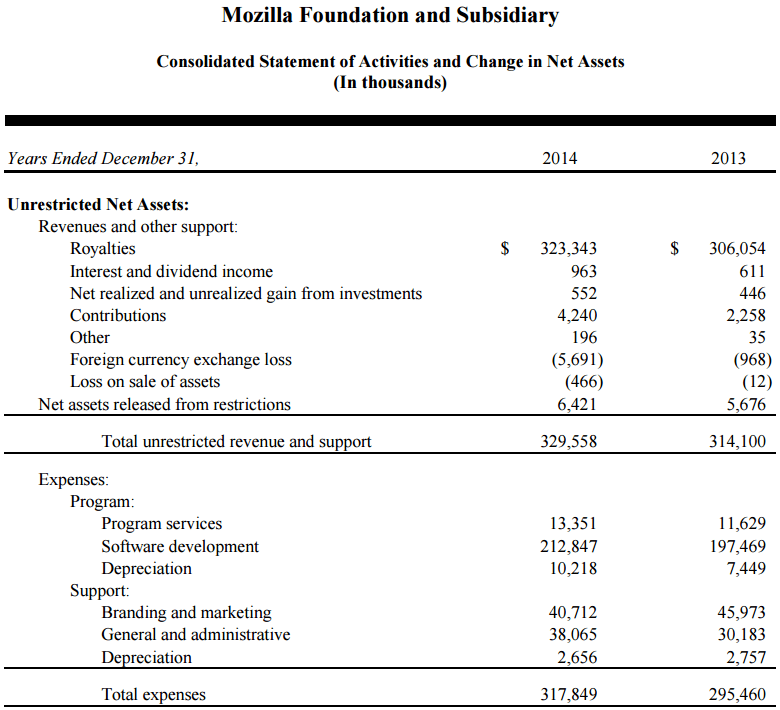 “While Google will continue to be a search option for Firefox users, we are not renewing our commercial agreement,” Mozilla executive Denelle Dixon-Thayer told VentureBeat last November. “2013 is the last full year for which we will record revenue from Google. Our agreement with Yahoo! begins taking effect in December.”

As a result, the 90 percent figure for 2014, which amounted to just over $296 million, came from both Google (11 months) and Yahoo (one month). Because Mozilla’s financials are so delayed, it’s too early to gauge the impact of Yahoo becoming the default search engine for Firefox users in the U.S. At the same time, Yandex last year became the new default in Russia, Belarus, Kazakhstan, and Turkey. Baidu remained the default in China.

In 2012 and 2013, 90 percent of Mozilla’s revenue came from Google. The flat 90 percent line shows that again in 2014, Mozilla could not figure out how to generate a majority of revenue outside of a major search partner. While the company is certainly experimenting with alternative revenue streams, we wouldn’t be surprised if Yahoo merely took Google’s place in providing the lion’s share in 2015.

That said, Mozilla has indicated it is looking to strike new deals with more partners (current major ones include Yahoo, Bing, Yandex, Baidu, Amazon, and eBay). The company says Firefox offers more choice in search providers than any other browser, with 61 search providers preinstalled across 88 different language versions.

Thanks to the Yahoo deal, Mozilla has five years of breathing room, but the organization is still under pressure to figure out other ways to make money. The good news is that Yahoo, unlike Google with Chrome, is not a direct competitor in the browser space.

Also in November 2014, Mozilla started accepting donations in Bitcoin via Coinbase (you can help reduce the organization’s reliance on search deals yourself by going here). The financial report for 2014, however, did not mention Bitcoin nor Coinbase, suggesting that virtual currency didn’t make a big impact in the single month the donation option was available this past year.

We’ll have to wait another full year before we learn what proportion of Mozilla’s revenues come from Yahoo, and whether the company will make more, or less, than it did with Google. In the meantime, you can read Mozilla’s full 23-page report for 2014 here: